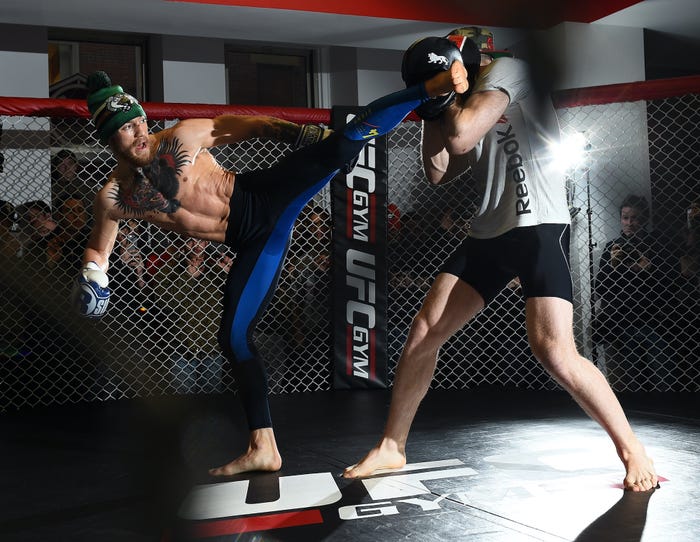 Conor McGregor has been "crazy motivated," rehearsing kicks, and drilling wrestling moves at a private training camp in Portugal ahead of his UFC return.

An Insider source close to McGregor, who asked to remain anonymous as they are not an official spokesperson, said the fighter is desperate to break UFC's pay-per-view record in the coming year.

McGregor is scheduled to return to the Octagon in a lightweight match on January 23 at a venue which is yet to be determined.

Insider's source in the McGregor camp says the Irishman has spent the last few weeks in Portugal, away from his regular training base — the Straight Blast Gym in Dublin, which is run by the Brazilian jiu jitsu master John Kavanagh — as he focuses on his next fight.

The Sun reports that McGregor is staying at a luxurious $13,250 per night beachside villa in the country's Algarve region, which has an infinity pool and a bouncy castle, alongside his family — his partner Dee Devlin, his son Conor Jack Jnr., and his daughter Croia.

"He is focused as hell [and] crazy motivated" while training at a private gym in the region, Insider's source said.

It is currently unclear who McGregor will actually be fighting

According to UFC president Dana White, a fight between McGregor and Dustin Poirier fight "is done."

However, ESPN reported this week that it is still not yet signed, that the hold-up is not on McGregor's side, and that if Poirier does not commit to the bout then Justin Gaethje could replace him.

McGregor became a fan favorite in mixed martial arts because of an attitude in which he was prepared to take on all-comers.

He may well have no preference who his opponent in January is, providing there is someone standing opposite him ready to throw hands.

For example, when Kavanagh roused McGregor from his bed in Las Vegas little more than a week before he was supposed to fight Jose Aldo in 2015, and told him that Chad Mendes would be replacing Aldo at UFC 189, McGregor said, "It doesn't matter, they're all the same."

He then rolled over to go back to sleep.

Poirier could present a different challenge to Gaethje, who is focused primarily on stand-up exchanges. Poirier is also regarded as a pathway to Khabib Nurmagomedov's UFC lightweight championship — something McGregor is eager to reclaim.

Our source, speaking before rumors of Gaethje replacing Poirier began circulating, said McGregor specifically took three training partners with him to Portugal for the Poirier fight — one for striking and two for grappling.

"I presume he thinks Poirier is going to take the fight to the ground," our source said.

Scroll through these photos to see McGregor drill kicks in Portugal:

He uploaded these kick routines, too:

Insider's insider said McGregor has a clear purpose — the Irishman wants to reclaim his spot at the top of combat sport, and Poirier or Gaethje are just two of a number of obstacles who could be in his way.

"There's a pay-per-view record to beat," the source said, referencing the 2.4 million sales which McGregor and Nurmagomedov's 2018 fight generated in US households.

It seems McGregor is now desperate to break that record by himself, without Nurmagomedov. He just needs the right opponent to do so. As things stand, though, he still doesn't have an official opponent for his fight in 10 weeks' time.