La Liga champions Barcelona began the new campaign with a 3-0 win over Alaves with the help of two Lionel Messi goals and one from substitute Philippe Coutinho at the Nou Camp.

Barca had dominated the late Saturday kick-off but again struggled to convert chances against a shrewd Alaves – who are the last team to win a league game at the Catalans' home, beating them 2-1 in 2016.

Messi had clattered the crossbar in the first half from a set piece and Ousmane Dembele forced visiting goalkeeper Pacheco to make an impressive save. 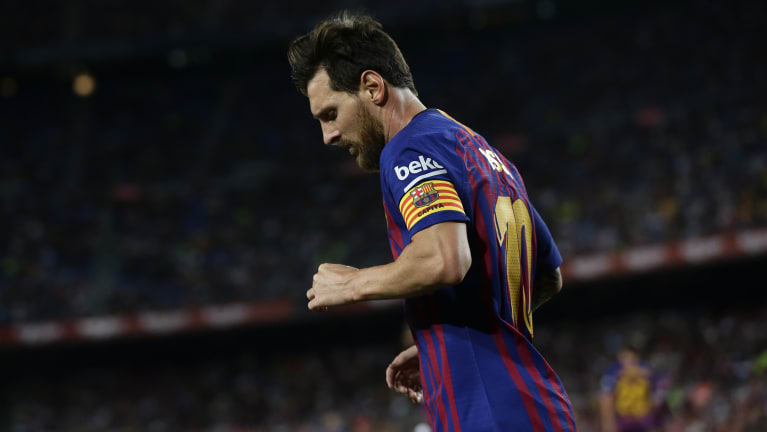 Back in action and back on the scoresheet: Lionel Messi.

Barca coach Ernesto Valverde brought on Coutinho at the start of the second half for Nelson Semedo, dropping Sergi Roberto from midfield to defence to give the team more creativity.

The hosts looked more incisive and dangerous but it still took a moment of genius from all-time top scorer and new captain Messi to break the deadlock.

The Argentine took Alaves by surprise by rolling the ball under the defensive wall and past a baffled Pacheco – repeating a similar strike against Girona last season.

It was also the 6,000th goal Barca have scored in La Liga.

Coach Ernesto Valverde was glowing in his praise of Messi's opening goal.

"With Messi you have to expect the unexpected. You don't know what he is going to do but he does know. That is the best way for it to be," he said.

"He is a genius and we are lucky to be involved in football at the time when he is playing."

Messi had also scored the club's 5000th league goal in 2009 and this was his 15th consecutive season scoring in Spain's top flight.

Record signing Coutinho sealed the points, finishing off a slick passing move by dribbling into the area and curling the ball home.

But it was Messi, the top scorer in La Liga last season with 34 goals, who had the final say, chesting down a cross from Luis Suarez and holding off a defender before stroking into the near corner with the final kick of the game.

Mario Hermoso scored just before half time to put the visitors ahead but his central defensive partner David Lopez put through his own net in the second half.

Real Sociedad won 2-1 at Villarreal despite going a goal down.

Gerard Moreno scored on his debut to put Villarreal ahead after 16 minutes but goals from Willian Jose and Juanmi gave Real Sociedad victory.