Canberra Capitals guard Kelly Wilson says it's time to prove they can win on the road as she prepares to face some of her former WNBL championship-winning teammates in Townsville.

The Capitals will play the wounded Fire in Townsville on Sunday, aiming to win away from home for the first time in two months when they take on the defending champions. 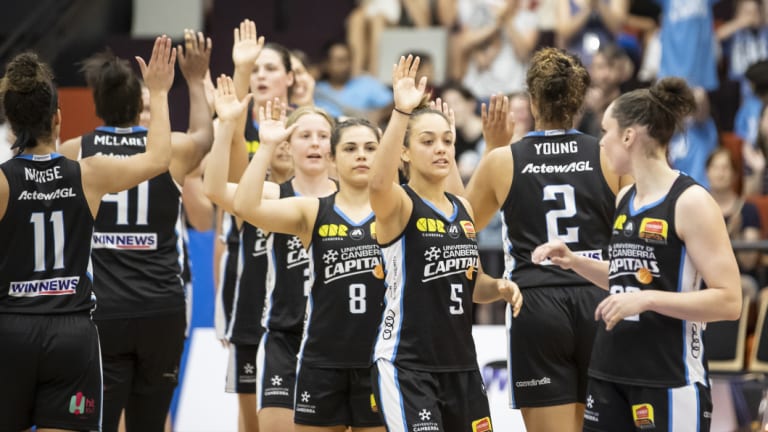 The Canberra Capitals say they need to win on the road to prove they’re a title contender.Credit:Sitthixay Ditthavong

Wilson was helped guide the Fire to a grand final triumph against Melbourne last season and the veteran has a long history with the Townsville franchise.

She played for Bendigo when they beat Townsville in back to back grand finals in 2012-13 and 2013-14 before being on the losing end when the Fire broke through for their first championship in 2014-15.

The 33-year-old has played 364 games in the league, including two separate stints in Townsville, and says beating the Fire in North Queensland is an important step towards a finals berth.

"We need to get this game to get a run of wins on the board," Wilson said.

"If we can keep improving, we've got seven games until finals time, we need to get ourselves into those high places on the [ladder].

"I love playing in Townsville, so a trip back up there isn't the worst thing. It's a hard place to play when you're the opposition, but we haven't played Townsville yet so it's a bit of a challenge.

"We don't know how they play, but we have to go there with the aim of getting a win. We need to prove we can win games away from home. To be able to protect our home court is great, but we need to be able to start getting wins on the road to be show we're a championship contender."

The Capitals and Fire will go into the contest with a stark contrast in from. The Capitals thrashed the Dandenong Rangers by 27 points at home on Friday night, while the Fire lost against Bendigo by eight points.

Former Capitals star Suzy Batkovic could make her return from injury for the Fire on Sunday to give the defending champions a boost as they fight to stay in touch with the top four.

The Capitals can move another step closer to their first finals appearance since 2010-11 if they beat Townsville. They have won 10 of their 15 games so far. Teams generally need to win 13 or 14 games in a season to guarantee a play-off spot.

The Capitals have won 10 or more games just twice in the past seven years and have won just one game in Townsville in the past three seasons.

"Townsville, if you were to look at the definition of a fortress, that's Townsville," said Capitals gun Kelsey Griffin.

"I haven't won a heap of games up there, so I think we need to come prepared play really great. There's talk that Suzy may be back as well, she's a champion and brings a lot of heart and soul to that team.

"The way the league is now, you have to win on the road to win a championship. We haven't done a good enough job of that yet this year, so this will be a really good test for us."