Sonny Bill Williams finds himself with an opportunity that most athletes can only dream of at the tail end of their careers: should he take up a reported mega-deal at rugby league's Toronto Wolfpack, he can do something both worthy and lucrative before hanging up the boots once and for all.

The 34-year-old has been a star in both rugby codes and, after New Zealand complete their duties at the Rugby World Cup, he's likely to step away from the top echelon of that code. 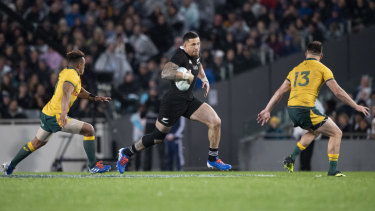 Sonny Bill Williams is set to become the highest paid player in the history of rugby and rugby league.Credit:AAP

But he's a man with a plan – Khoder Nasser wouldn't have it any other way – and that might just included a two-year stint in Toronto with the English Super League's latest addition.

Rest assured, there will be other options on the table for SBW, who is still in sublime shape and was good for the All Blacks when he came on late during their semi-final loss to England. But if the dollars are real and not the rugby league equivalent of a heavyweight title fight bankrolled by a mysterious oil baron in the Middle East, this should be the easiest decision he's ever made.

European rugby would give him a delightful lifestyle, probably four or five million in the bank and very little adjustment in terms of skills and training.

That makes far more sense than a return to the boxing ring, where he could probably earn a few dollars from some domestic fights against other retired footballers, a niche genre which seems to have some appeal with the Australian sporting public for whatever reason.

Canada is one of rugby league's newest frontiers and SBW would be the centrepiece of the Wolfpack.

But as much as he looked like a Greek god in the ring, SBW was never really much of a stone-cold assassin inside the squared-circle. He never looked comfortable hurting other people, which is absolutely fine, because he's a nice guy. It's not an ideal gig for nice guys, Jeff Horn being an exception.

Now there is another player on the horizon in the shape of Australian mining and resources investor David Argyle, who has dangled upwards of $9m over two years to convince SBW to join the Wolfpack as they make their debut in the Super League, having won their way up through the divisions since their inception in 2017.

Canada is one of rugby league's newest frontiers and SBW would be the centrepiece of the Wolfpack. It's a hockey and, thanks to the Raptors, basketball country but SBW might even find himself being recognised when he's oot and aboot. Given the formative nature of the team, he would have the chance to make a meaningful and lasting impact, especially if they have any measure of success.

Argyle is an intriguing figure in the sport. He holds a degree from the University of Western Australia and an MBA from the University of Michigan and made a fortune investing in minerals and resources across the globe. He currently sits as the executive co-chairman of Brazil Potash Corporation, which is working on fertiliser projects in the region.

He took a punt on rugby league in North America and has already made significant inroads, although it hasn't been without moments of controversy. In June, he stood himself down as the Wolfpack's chairman and chief executive after a racist comment he made to Swinton forward Jose Kenga.

"I was incredibly careless with my words when speaking to Swinton Lions player Jose Kenga after our game at Lamport Stadium on 28th April 2019. I understand the unwitting racist connotations of what I said and the distress caused to Jose," Argyle said after he sacked himself.

But he is the man dangling an immense carrot in front of Williams, who could get paid close to $5m a season to play rugby league in Canada. Sit back and digest that sentence for a moment.

The opportunity is wondrous and the salary simply insane. And if he gets bored, there's bound to be a few retired hockey players to beat up if he can't resist pulling on the gloves one final time.