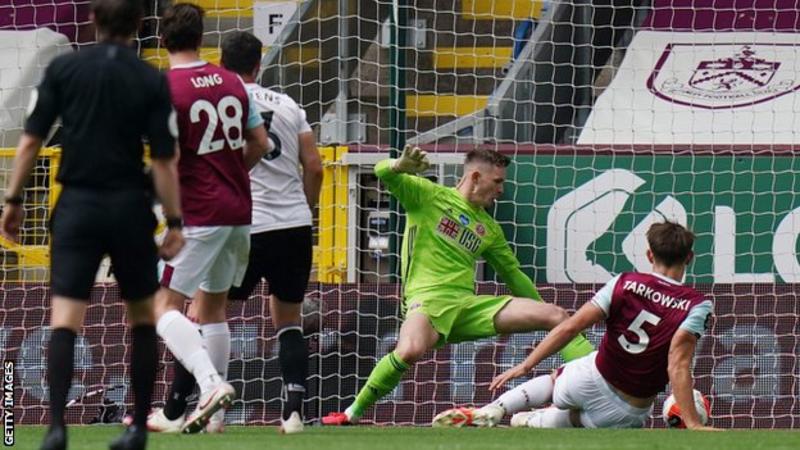 The defender struck a rising half-volley into the far top corner of the net after a short corner had been swung into the box and flicked on by Billy Sharp.

It was reward for a positive display from the Blades, who pressed forward for much of the second half after James Tarkowski had given the home side the lead with a sliding close-range finish.

Both sides will feel they had the chances to secure what would have been a big three points in their quest to secure a place in the Europa League.

The Blades had enough of the play and chances, with Oli McBurnie denied by Nick Pope in the very first minute, and could have had a penalty had the VAR officials deemed Erik Pieters’ accidental handling of the ball in the box a punishable offence.

At the other end, Matej Vydra and Dwight McNeil both fired superb opportunities wide of goal for the Clarets.

The draw means Sheffield United stay eighth – a position that could be good enough for European qualification – two points ahead of ninth-placed Burnley.

The game was an advert for the quality and resolve of two of the league’s biggest over-achievers.

Sean Dyche continues to a do a stellar job at Burnley in incredibly trying circumstances, with his side hampered both by contract issues with some players and by injuries.

He was able to name nine substitutes for the first time since the restart, including Chris Wood, Johann Berg Gudmundsson and Robbie Brady, but had to cope without captain Ben Mee and midfielder Jack Cork because of injury.

The Clarets continue to find a way to achieve results, though.

After all, this is a team who were three points above the relegation zone in January and are now eyeing a potential late run into the division’s top third.

They have won as many games this season as in any of their previous Premier League campaigns, equalling the number they managed when finishing seventh in 2017-18.

Even with Mee absent, they were defensively solid, with Kevin Long stepping in to ensure Pope was largely protected, barring an early effort from McBurnie that the keeper parried and Egan’s shot that he had little chance of saving.

The Clarets will feel they should have wrapped up the points with 15 minutes left but after following up Jay Rodriguez’s parried shot from long range, McNeil fired wide with just Dean Henderson to beat.

That they did not, left the door open for the Blades to claim a deserved point.

In Wilder, the Blades have their own Dyche – a manager who demands commitment from his players and offers them the promise of self-improvement in a successful side.

At no point during the game did the heads of the Blades players drop, nor their faith in the strategy wane.

Their territorial advantage did not result in an abundance of opportunities, but when their one big chance came they had the skill and composure to capitalise and claim their point.

Having taken four points from their past two games, following back-to-back 3-0 defeats, and with Jack O’Connell making a welcome return from injury, the Blades have cause for optimism. 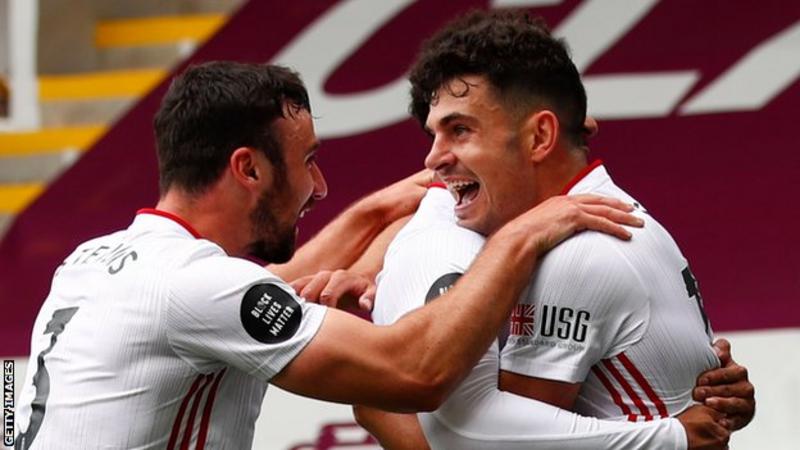 ‘These players are giving us everything’

Burnley boss Sean Dyche: “I’m certainly not disappointed. We are maximum stretch at the moment with the squad. I thought we were very competitive in awkward conditions and made chances that should really have got the game done.

“Fair play to Sheffield United, they have some resilience to them, which we have seen all season. They got some luck as well with the corner and delivery as it has got a little nick.

“Normally players coming out of an injured spell would have reserve games but we can’t do that. We just have to get them involved.

“Seven points from the four games is acceptable. All you can ask is for players to give you everything and they certainly are.”

Sheffield United boss Chris Wilder: “I didn’t think it was a game with a lot of quality. Conditions didn’t help – blustery and a dry pitch. But it is always going to be difficult coming here. There was never going to be anything handed out to us.

“They (Burnley) get over disappointment quickly, are consistent in their attitude and performance and they always turn up. The hard part now for us is to match what they have done. We have to emulate it.

“John (Egan) has missed some chances this season. It is an area we have looked at. We should be a bit more of a threat.”

Burnley are back in action on Wednesday, 8 July with a fixture at West Ham (18:00 BST), while Sheffield United host Wolves on the same evening at the same time.

Erik Pieters (Burnley) wins a free kick in the defensive half.

Attempt missed. Erik Pieters (Burnley) left footed shot from outside the box is close, but misses to the right.

Kevin Long (Burnley) wins a free kick in the defensive half.

Attempt saved. Sander Berge (Sheffield United) right footed shot from outside the box is saved in the top centre of the goal. Assisted by David McGoldrick.

Lys Mousset (Sheffield United) wins a free kick in the attacking half.

Chris Wood (Burnley) wins a free kick in the attacking half.

Attempt missed. Dwight McNeil (Burnley) left footed shot from the centre of the box is close, but misses to the right.

Attempt saved. Jay Rodriguez (Burnley) right footed shot from outside the box is saved in the top centre of the goal. Assisted by Ashley Westwood.

Billy Sharp (Sheffield United) wins a free kick in the attacking half.

Attempt missed. Jay Rodriguez (Burnley) right footed shot from outside the box misses to the left. Assisted by Erik Pieters.

Phil Bardsley (Burnley) wins a free kick in the defensive half.

Kevin Long (Burnley) wins a free kick in the defensive half.

Attempt missed. Erik Pieters (Burnley) left footed shot from the right side of the box is high and wide to the right. Assisted by Matej Vydra with a headed pass.