Hawthorn’s 300-game superstar Shaun Burgoyne has thrown his support behind new recruit Chad Wingard, labelling him a "match winner" who wants to push into the midfield group for the brown and gold.

The 36-year-old Burgoyne was joined on the training track by Wingard in Adelaide on Monday, with both taking part in the AFL’s Indigenous All Stars Summit. 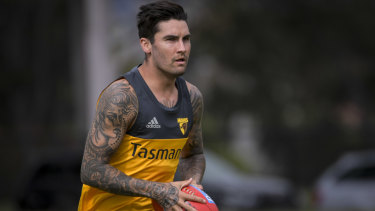 But Wingard has been managing a calf injury that forced the former Port star to pull out of the AFLX tournament, which begins on Friday.

But despite the slight injury setback, Burgoyne is backing his teammate to have a big impact in his first season at Waverley.

"He’s settling in quite well, he’s on a modified program at the moment but is back training and will look to get a couple of games in [before round one],” he said.

"You can see when he has trained, he’s a star, so I’m looking forward to him finishing off his pre-season and getting stuck into games.

"He trained today, running and doing everything, so it’s about conditioning, and when they pull you out for one week you’ve got to do two or three to build yourself back up."

The Hawks travel to Ikon Park on Thursday for a practice match with Carlton, which will see the Blues unveil several new faces, including prized recruits Mitch McGovern and Will Setterfield, No.1 draft pick Sam Walsh and former VFL star Michael Gibbons.

Alastair Clarkson’s side will then take on Brisbane and Richmond in JLT matches before round one.

Burgoyne said it will be up to the medical team to decide if and when Wingard will be available.

"He has very good knowledge of the game, he speaks up, and he’s a two-time All-Australian so the boy can play, and passing that on to a lot of our younger players.

"He also wants to push up into the midfield at some stage of his career so he’s very keen to learn.

"He’s a genuine matchwinner on his day so we’re looking forward to him adapting to our style and taking his game to the next level. It’s up to him where he wants to go with his career but I’m definitely happy to have him at Hawthorn."

The shocking injury to Brownlow medallist Tom Mitchell has left a giant hole in the Hawks’ midfield and Burgoyne is all too aware that he will be called on to help fill the void, along with the likes of Wingard.

"The body is all right, all pre-seasons are hard but they do a very good job in looking after me and I’m probably at the stage where I’m not going to get too much fitter but it’s making sure I do quality over quantity.

"The young boys come in fitter and stronger every year so I’ll do my best to keep up with them.

"I prepare to play every game, I do that every year, that’s how I head into training and we’ve never spoken about having a rest ever in my career.

"So we’ll see how the team’s going, how my body’s going, but I’ll mentally prepare to play every game."