Sam Burgess wants to explore a raft of options including coaching before finalising his next Rabbitohs deal, which he insists is the most important of his career and won't be done before the end of the season.

The England international and one of the most feared forwards in the game will be classed as a free agent from November 1, along with twin brothers George and Tom, but is intent on finishing his career at Redfern. 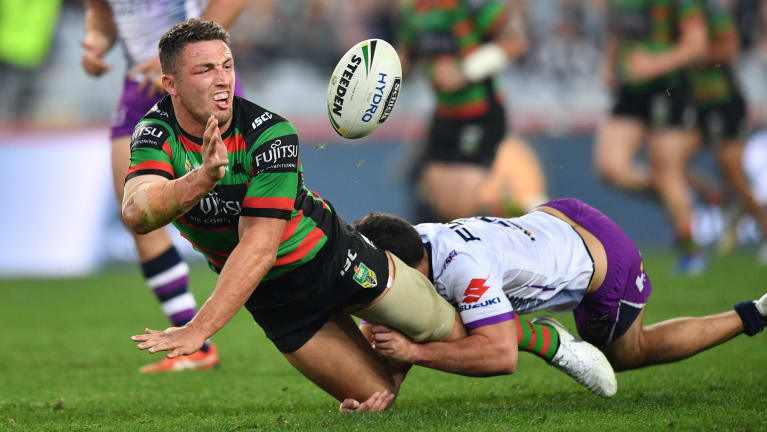 Waiting game: Sam Burgess plans to stay put at Redfern and iron out the details later.

Months ago, the Rabbitohs started talks with the brothers' English-based manager as South Sydney stormed to the top of the competition, but won't risk any negotiations interfering with the title tilt of Anthony Seibold's side.

It means Sam, who left the Rabbitohs for rugby union after winning the Clive Churchill Medal in their historic 2014 premiership, is content to bide his time on any new agreement to stay at Redfern. His current Rabbitohs contract expires at the end of 2019.

But an extra two years will take Burgess through to the end of 2021 and the World Cup on English soil. And it's what he does after his next contract that the South Sydney firebrand is contemplating most.

"This decision is probably the biggest one for me because it's my last contract," he said. "I'm thinking post career, I'm thinking everything. I really need to give it some thought.

"In terms of getting one done before the season is out, I'm not sure. That doesn't mean I'm not going to be at South Sydney. I just want to be smart about it and think of the best deal for me and my family.

This decision is probably the biggest one for me because it's my last contract.

"I don't know whether [the best post-career option is] coaching, whether it's commercially or doing more media. But I'm keeping all my options open so I'm prepared and we've got a good plan in place."

Burgess' preference to shelve further talks about his future until the end of the season mirrors that of coach Anthony Seibold, who has been linked with a return to Queensland to take over the Broncos at the end of the 2019 season.

A candid Seibold has insisted he will at least see out the length of his current deal at Redfern, which runs through next year.

Brisbane coach Wayne Bennett has been in the centre of the coaching carousel with the Broncos refusing to guarantee he will coach them beyond the end of next year.

Asked about the coaching circus, Burgess said: "It needs a real discussion at some point at the end of the year. We don't see it in the AFL. [But] for me to talk about it right now is stupid. I don't want to waste my time on it."

The Rabbitohs will welcome back captain Greg Inglis, fullback Alex Johnston and winger Campbell Graham for the clash against the Raiders in the nation's capital on Saturday, which could vault them back to the top of the ladder for a couple of hours at least.

Other minor premiership contenders the Storm and the Roosters, who are joint top with the Rabbitohs on 32 points, play later on Saturday.