The NRL has declared war on “dead time” after games last year, on average, went five minutes longer yet there were only an additional seven seconds in playing time.

While an early season penalty blitz by referees contributed to some of the “dead time”, the over-use of replays of tries by officials in the bunker was a major contributor to a decline in the percentage of time where the ball was in play. 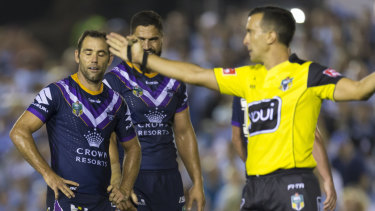 High time: There will be fewer penalties in 2019.Credit:AAP

With games stretching to 94 minutes and 44 seconds from kick-off to final whistle, the amount of dead time grew to 41 minutes and 52 seconds.

Those are damning numbers for a sport which relies on TV rights fees and seeks to attract an audience of the short-attention-span millenials who are increasingly agnostic over what screen they watch.

With the ball in play for only 55.8 per cent of time the NRL is moving closer to Super Rugby, where the average game has only 37 minutes of action (admittedly some of it where the ball can’t be seen).

In a document to club football department bosses, the NRL has signalled a major reduction in the time spent by bunker officials reviewing tries: “The primary focus of bunker review officials should be to determine if there is sufficient evidence to overturn the live decision of the referee.”

Translation: Unless the match referee has missed something very obvious, the video referee will be expected to uphold his decision. No more endless replays searching for evidence to rule against the try he has signalled, or ask telecasters to supply more angles of vision to overturn a “no
try” decision he has made.

In any case, time spent by the video referees debating a try is counter-productive to the attacking team because it allows the defence time to rest. 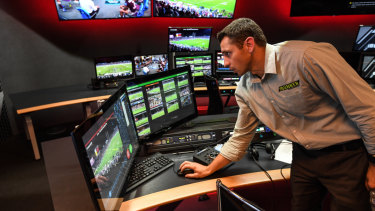 Most coaches, frustrated by the bunker endlessly reviewing a try they have “scored”, mutter: “If it’s a no try, get to the kick-off so we can have another crack at them.”

The NRL has already announced other moves to cut “dead time”, such as reducing by five seconds the time players must form a scrum or re-start play with a drop kick.

Furthermore, any player sin-binned must now run, not walk, from the field, taking the most direct route to the dressing room. 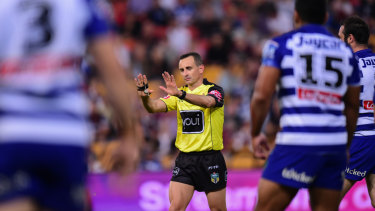 The NRL document sent to football managers also highlights how penalties in 2018 resulted in dead time. Average penalties increased by 28 per cent from 12.9 per game to 16.5. But the referee blitz, mainly on players encroaching the 10-metre defensive corridor, occurred early in the season.

Perhaps statistics from round six onwards would have been more meaningful. However, it’s telling why the inside-the-10m penalties increased by 111 per cent in 2018, as well as the “slow peel” off the ball carrier infractions by the defenders rose by 25 per cent.

It’s because the NRL sent out an edict before the 2018 season saying referees would insist players touched the ball with their foot when playing it. NRL coaches, therefore, sent the players back to school, ordering anyone who did not roll the ball back with his foot in training do punitive push ups.

But coaches also drilled players in sprinting up in defence. It’s part of the DNA of the game: if referees slow down the attack, coaches will quicken up the defence.

Once again, we have another off-season of contradiction. NRL head of football Graham Annesley was quoted in a Sydney newspaper on January 29 saying “let the game flow” but three days later Fox Sports had him saying “not every game is the same”.

So, will 2019 begin with low penalty counts, where breaches are ignored and the ball sails to the wings, or one where the referee has no pre-determined notions and acts on what he sees?

The best clue lies in the NRL document in a section titled: “ARLC Strategic Plan 2018-22”.It lists an initiative: “Explore and implement (where necessary) elite game reforms which maximise continuous and free-flowing football and equally reward skill and power.”

The relevant KPI to achieve this? “Improve ball in play as a percentage of
elapsed game time.” This KPI had been rising steadily since 2013, reaching 58.9 per cent in 2017, when it dropped to 55.8% last season.

So strap yourself in folks. The message is clear: there will be fewer penalties and less bunker referrals in 2019, offering more time to keep the ball in play.