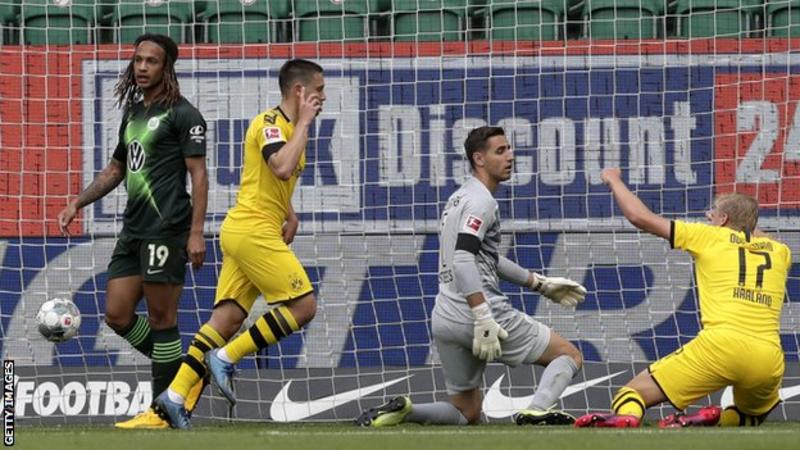 Borussia Dortmund kept up the pressure on Bundesliga leaders Bayern Munich ahead of Tuesday’s clash between the two with a hard-fought victory at Wolfsburg.

The visitors were largely the better side throughout, controlling possession and probing for openings against an opponent set up to defend and hit on the break.

It was from such a patient move that Raphael Guerreiro gave them the lead with his eighth goal of the season, slotted in from close range after Erling Braut Haaland had failed to convert.

Jadon Sancho, who has been struggling with a groin strain, again started on the bench but came on to set up the second goal, scored via a low drilled finish by Achraf Hakimi.

Shortly after, a VAR review led to home player Felix Klaus being shown a straight red for a high tackle on Manuel Akanji, that caught the Dortmund player on the calf.

Dortmund’s win means they are now a point behind Bayern but the reigning champions can increase this to four again with victory over Eintracht Frankfurt later on Saturday.

There will be some concern for Dortmund, though, ahead of Tuesday’s game, with defender Matts Hummels leaving the field at half-time with a heel problem.

Guile and grit from Dortmund

It is now two wins from two for Dortmund since German top-flight football returned, with this victory following the impressive one achieved over Schalke last Saturday.

Once again, though, it made for eerie watching, with no fans in attendance and every shout from players and support staff audible.

And strict hygiene protocols remain firmly in place, meaning – amongst other measures – warm-ups were staggered, while coaching staff and substitutes wore masks and were all separated by two metres as they took their place on the sidelines.

In general, though, it appeared to be another success as Germany lead the way for Europe’s top leagues to follow in staging football during the ongoing pandemic.

The away side were noticeably superior in the first half and could easily have led by more had Thorgan Hazard been able to steer his first-time effort from the edge of the box on target instead of wide.

Wolfsburg came out fighting in the second half, though, and should have been level soon after the break.

However, Renato Steffen could only hit the top of the bar with his shot after being put through on goal by Wout Weghorst.

Sancho’s introduction injected more life into the visitors and his typical driving run and pass set up Hakimi to all but seal the win before Klaus’s technology-assisted dismissal.

Mahmoud Dahoud (Borussia Dortmund) wins a free kick in the attacking half.

Mahmoud Dahoud (Borussia Dortmund) wins a free kick in the defensive half.

Maximilian Arnold (VfL Wolfsburg) is shown the yellow card for a bad foul.

Achraf Hakimi (Borussia Dortmund) wins a free kick in the defensive half.

Manuel Akanji (Borussia Dortmund) wins a free kick in the defensive half.

Goal! VfL Wolfsburg 0, Borussia Dortmund 2. Achraf Hakimi (Borussia Dortmund) right footed shot from the right side of the box to the centre of the goal. Assisted by Jadon Sancho following a fast break.

Attempt missed. John Brooks (VfL Wolfsburg) right footed shot from the centre of the box is high and wide to the right following a set piece situation.

John Brooks (VfL Wolfsburg) is shown the yellow card for a bad foul.

Jadon Sancho (Borussia Dortmund) wins a free kick in the defensive half.

Attempt saved. Renato Steffen (VfL Wolfsburg) left footed shot from outside the box is saved in the top left corner.