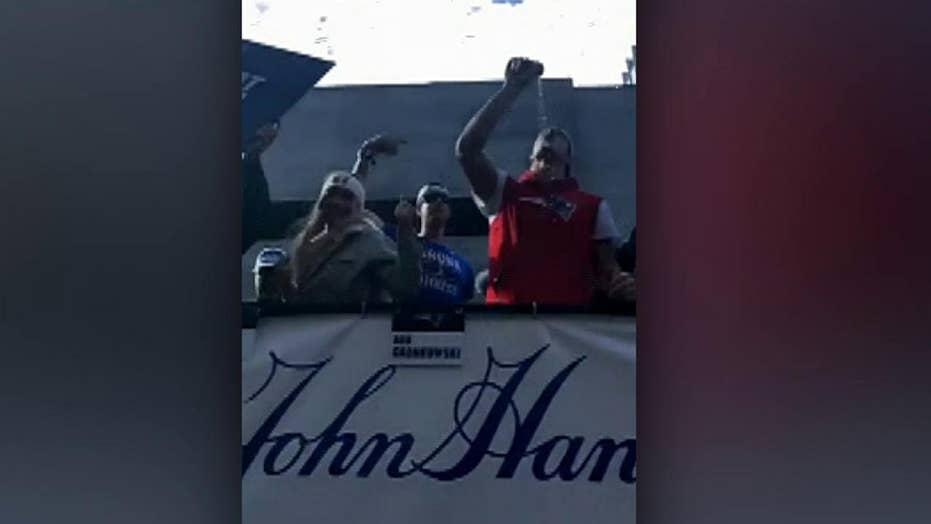 One of the major stars behind the New England Patriots' dominance, Ron Gronkowski, celebrated the team's sixth Super Bowl championship during a Boston parade on Tuesday — and he did it in the Gronkiest possible ways.

He drank wine and chugged beer.

He made a one-handed catch of a box of Tide PODS thrown from the crowd.

He made wardrobe changes, a fair number of them —  a Patriots poncho, a police vest, his bare chest.

Revelers basked in dazzling sunshine and temperatures that peaked above 60 degrees, as Gronk and the Pats took a two-mile swing through the city aboard Boston's iconic amphibious “duck boats.”

With cheers of “We want seven!” and “Next year, right here!” hundreds of thousands of jubilant fans jammed downtown Boston (a familiar tradition this century — the city’s teams have won 12 championships since 2001), and yet, Gronk had to have the most fun of all.

The 29-year-old Gronkowski is a three-time Super Bowl champion who has been one of the most dominant players at his position of tight end ever during his nine-year NFL career.

On Sunday, Gronk rumbled down the field, got past two defenders and hauled in the football to set up New England’s go-ahead touchdown.

“Tom threw it to me and I had to make a play,” Gronkowski said after the Super Bowl. “I just come through where it needs to be that time. He knows to trust in me and throw that ball and I’m going to go grab it.”

Was it his biggest catch ever?

“You tell me,” Gronkowski said after New England’s 13-3 Super Bowl victory over the Los Angeles Rams on Sunday night. “It’s up there. I like making big catches like that.”

Gronkowski, who has talked about retiring after this latest NFL title, finished the big game with six catches for 87 yards, including two receptions on New England’s only touchdown drive.

“When it comes to crunch time,” Gronkowski said, “I always find a way.”