The Gold Coast Magic Millions sale has come and gone for another year and the numbers were mind-boggling, surprising many who attended.

Bloodlines has been to every Magic Millions sale and the 2019 version had record-breaking statistics; onlookers must have thought money was growing on trees. 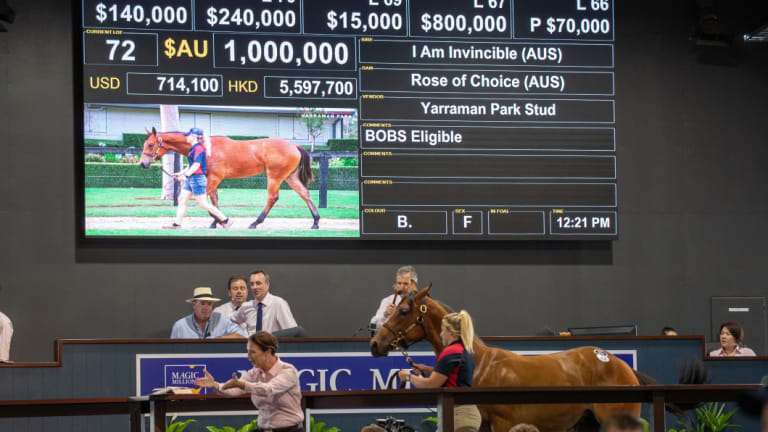 Golden boy: I Am Invincible had a great sale. His youngster from Rose Of Choice was one of just two fillies to reach seven figures. Credit:AAP

In the lead-up Bloodlines spoke with many good judges who doubted there would be more than a couple of $1 million-plus lots.

The post-mortem of the sale is interesting, especially the stallions category. I Am Invincible is setting some incredible statistics, with 56 of his lots selling for $24,645,000 at a fantastic average of $440,089.

Newgate Farm’s Super One was one of two stallions by I Am Invincible whose first crop came after 2016 matings where he stood for $11,000 and his 11 youngsters were extremely impressive individuals which averaged $126,364.

The syndicators were out in force. James Harron was the biggest player with his colts and fillies syndications. He bought eight colts for $5,200,000 and his fillies syndicate was also active, buying four lots for $345,000. Last year his fillies proved extremely popular with 13 of his buys sold.

Denise Martin’s Star Thoroughbreds signed for 11 lots for $2,225,000 (average $202,273), with Brett Howard assisting in the selection of their horses to be trained by Chris Waller.

Last week Bloodlines mentioned John Singleton had a two-year-old filly that had trialled brilliantly for trainer Bjorn Baker. She is called Tuesday Special and the owner said he was looking forward to building his racetrack team.

Singo’s racing manager Duncan Grimley said the owner had decided not to sell any of his home-breds, which means he will be keeping 17 of his yearlings plus another two which he purchased at last week’s Magic Millions.

He paid $550,000 for a really nice More Than Ready filly from Lipari, making her a half-sister to Australian Derby winner Levendi, a son of Pierro who has won five of his 10 starts and more than $1.65million in earnings.

Zoustar’s Australian reputation has obviously preceded his arrival for his first northern hemisphere breeding season with the champion racetrack performer producing an avalanche of booking requests.

David Redvers, who is managing Zoustar’s European bookings, told Bloodlines that once the horse had been made available for showings at his new home in Newmarket his phone rang off the hook.

‘‘In no time at all Zoustar’s figure of 120 broodmares to be served had been filled up with a large majority of Europe’s most successful breeders lining up for a covering,’’ he said.

‘‘We continued to receive requests for bookings with another 25 inquiries and the decision now is that Zoustar’s numbers will increase to 135 with the remaining 10 mares on the reserve list.’’

Edward Cummings has started his new venture as a solo trainer and was happy with his three purchases from the Magic Millions sales.

Two of his buys were yearling fillies – the first by So You Think for $110,000 and the other by Super One for $80,000. Cummings jnr, who has decided to go out on his own rather than co-train with his father Anthony, made his biggest outlay ($115,000) at the tried horses session on Tuesday for a horse from the Godolphin dispersal.

His buy was a three-year-old named Lava, a son of Reset, who was placed at Cranbourne on January 11, and the galloper will possibly be the first of young Cummings’s runners in the not-too-distant future.

The trainer is setting up shop at the Hawkesbury racetrack with the club building 30 boxes for the fledgling trainer.