The pair fought on the undercard of Mike Tyson's pay-per-view spectacle against Roy Jones Jr. 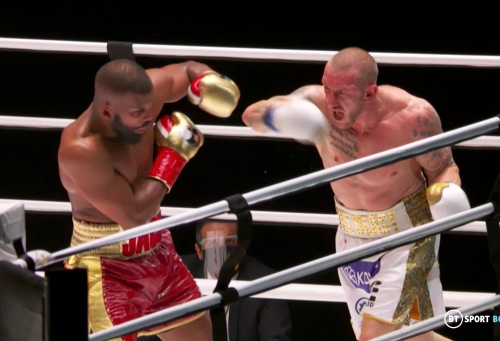 And it proved to be every bit of a mismatch that former two-weight champion Jack promised.

McKernan came into the bout as a little-known but brash talking cruiserweight, unbeaten in 13 fights.

But the former US army soldier was unable to back up his words after being dominated in every round.

Jack, 37, immediately started the opening round on the front foot – and never let up.

He stalked McKernan, 33, all around the ring, pumping out an expert jab and smashing the American's body to bits.

Jack looked to have his man in trouble towards the end of the round as he cornered him and landed some clubbing hooks upstairs and to the body.

In round two the difference in class was again apparent, as McKernan took a complete battering downstairs.

It was a similar story in the third as Jack walked McKernan down, measuring the distance with his jab and letting his hands go.

McKernan found himself bullied around the ring but every so often would hit in hope, but failed to put a dent in his vastly superior opponent.

In round four Jack landed with a beautiful double jab followed with a right hand and spent most the session investing in body shots.

Into the fifth and McKernan could do nothing but retreat backwards, as Jack's jab and body shots did the damage.

Jack carried on the onslaught in rounds six and seven, but evidently upped his tempo as he looked for the finish.

He began to double up his hooks to the body and smashed McKernan with constant hooks.

But the ex-Machine gunner – who served one year in Iraq – just would not wilt.

The eighth and final round proved to be the most one-sided, with McKernan spending the whole three minutes shipping punishment.

Jack landed with uppercuts, hooks and body shots to cap off a complete beatdown beatdown.

Commentators were left praising McKernan's toughness, after his suffered'grotesque' swelling around his head.

Swede Jack will now look ahead to a rematch against Jean Pascal, having the first fight by split-decision last December.