Vacant red seats outnumbered spectators at a recent Toronto Furies home game. Just 310 people showed up that day at Mastercard Centre, the 1,000-seat practice facility of the N.H.L.’s Toronto Maple Leafs. The turnout was typical for the Furies, one of six clubs in the Canadian Women’s Hockey League.

Sami Jo Small, the Furies’ first-year general manager, often sees larger crowds at her motivational speaking engagements. A three-time Olympian for Canada, she does more than 50 appearances a year across North America for corporate clients.

That’s how Small, 42, makes her living. Running the Furies is largely a volunteer activity, for now.

Through eight seasons as a Furies goaltender, Small saw the difficulties of drawing an audience. She took over the front office in hopes of building something bigger, an enterprise that could pay decent wages to its staff members.

“I wanted people that are willing to put in the time and effort, because they see value in it,” Small said. “Eventually, my hope is that I can pay these people what they’re actually worth. At the moment, we can’t do that. We have to sort of acknowledge that reality right now.”

Small and five other players founded the league in 2007, and she will concede that she expected it to be further along. 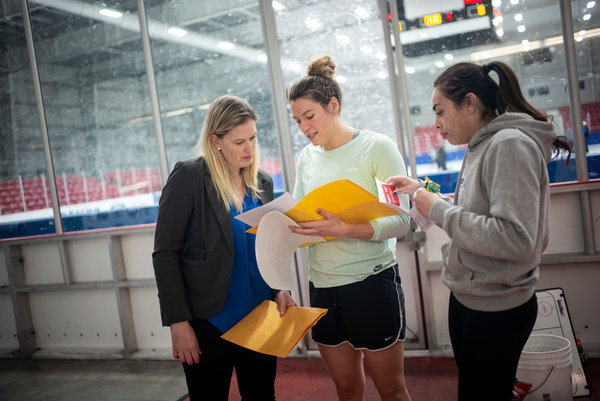 Toronto is perhaps the world’s most hockey-crazed city, but not only do the Furies draw a tiny fraction of the Leafs’ audience (about 19,200 fans a game), their attendance also falls well short of the numbers for the city’s minor league men’s team, the Marlies. After winning the American Hockey League’s Calder Cup last season, the Marlies are averaging more than 5,600 fans. The Furies have had several strong seasons, winning the championship as recently as 2014, yet the attendance remains so low that the league often reports it as a zero.

There have been significant advances recently in the Canadian Women’s Hockey League — which has a team in the United States (Worcester, Mass.) and one in China (Shenzhen). Last season, the players started being paid for the first time. Under a league salary cap of 100,000 Canadian dollars, players receive 2,000 to 10,000 Canadian dollars a season.

Also, several prominent members of the rival National Women’s Hockey League, which has five teams in the United States, defected to the Canadian league this season.

With the Furies, Small has noted another improvement, the kind many athletes would not welcome: tough analysis by the news media.

Though drawing attention is a challenge in Canada’s biggest city, where the Leafs are covered obsessively, Small said bloggers had written about women’s hockey regularly — and with an edge.

“There was never media coverage that said: ‘Sami Jo wasn’t at the top of her game. She didn’t play her best tonight.’ We now have people at our practices, knowing the players, knowing what level they should be at.”

The Canadian Women’s Hockey League does not consistently report attendance figures. But the Montreal team, which draws the largest audiences of the four clubs in Canada, attracted 1,567 fans to its home opener on Oct. 13. Last season, when the league added the expansion franchise in China — Kunlun Red Star — to help develop women’s hockey in the country ahead of the Beijing Winter Olympics in 2022, the team averaged 2,000 fans. (When the North American teams travel to China, they stay for a series of games.)

The Leafs and the Furies started a partnership in 2012, in which the N.H.L. franchise invests 30,000 Canadian dollars annually in the Furies for equipment, uniforms and travel, and also to offset the costs of coaching. The club also invites the Furies to participate in various Leafs skills development clinics and youth programs, and the partnership expanded in 2015 to include the sale of Furies merchandise at the Leafs’ arena.

Small said that the partnership had also provided superior facilities for the Furies and that she had used them to help recruit players. “We have a great, dedicated dressing room,” she said. “We have a gym right there and a medical facility.”

Small, who played on a men’s hockey team at Stanford while working toward a degree in mechanical engineering, uses her home in Mississauga, Ontario, a suburb of Toronto, as her primary office, where she also handles administrative duties for her speaking career.

The Furies play weekend games and practice in Toronto from 9:15 p.m. to 11 p.m. on Tuesdays, Wednesdays, and Thursdays — more frequently than any other C.W.H.L. team. It is the only time they can get the ice. Small tries to accommodate her players’ educational, professional and family responsibilities.

“Shannon Moulson lives in Hillsburgh, so she has a one- hour, 15-minute commute home after practice, and then has to be at school at 8 o’clock in the morning,” Small said. “Do I think she’s exhausted? Yes. She’s constantly on the road.”

To help, Small made Wednesday practice optional. “When I think of Sami Jo, I think of how generous and approachable she is,” said Renata Fast, one of three Furies who played for Canada’s 2018 Olympic silver medalists. “She always makes time for that one-on-one connection.”

“I think we have a pretty big impact on them,” Sarah Nurse, another 2018 Olympian, said. “For them to come and tell us their stories about how they started playing hockey at 40, 45 years old and they just love the game, it’s amazing for us.”

Small said these recreational players constituted the majority of Furies fans, attending with their family and friends. She focuses her marketing on them, rather than on young girls working toward playing professionally. According to the Ontario Women’s Hockey Association, the province had 38,914 registered female players at all levels of the sport in 2017-18.

“The reality is that most of the young female players in southern Ontario have tournaments every weekend,” Small said. “Their parents are carting them off from one rink to the next rink. They don’t necessarily have time to come to our games.”

Just two C.W.H.L. regular-season games have been televised across the country this season, and Furies games are not broadcast on radio.

“It would obviously be nice if we had more of our games on TV and even more support from the Leafs and Marlies,” Spooner said. “But I do think they try to support us the best they can. Hopefully, eventually we can get to the point where we’re more of a sister team and maybe play back-to-back games or something like that.”