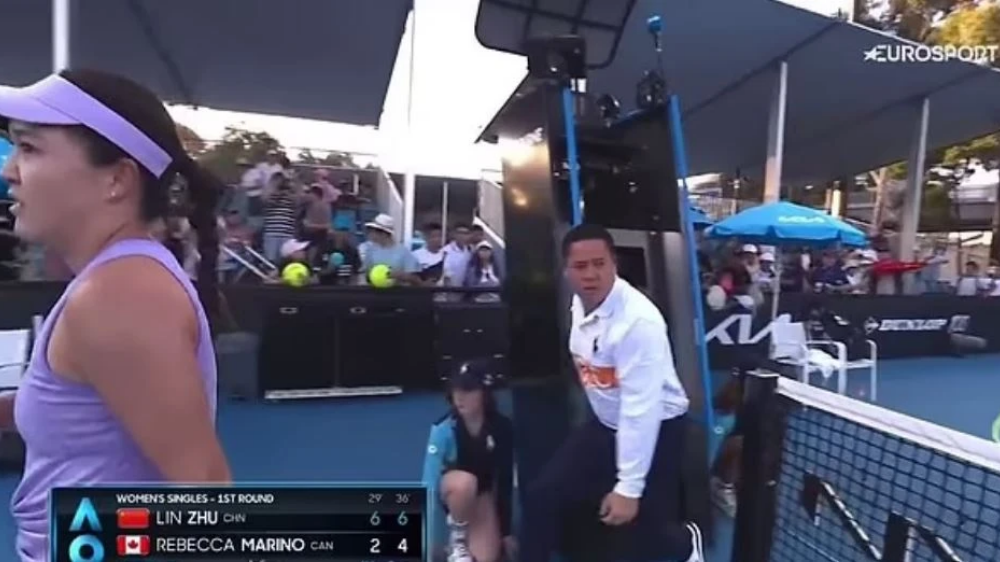 Tennis umpire James Keothavong chased down a thief for stealing a player’s towel in bizarre scenes during a first-round clash at the Australian Open.

The incident occurred in the opening round of the women’s singles as China’s Zhu Lin beat Canada’s Rebecca Marino 6-2 6-4 on Court 14 at Melbourne Park.

Lin and Marino shook hands after the match ended and the pair walked over to the umpire’s chair before the Canadian spotted a fan stealing one of the Chinese player’s towels as she shouted: ‘Somebody just took your towel!’

British umpire Keothavong then shouted ‘oi’ and ‘wait’ as he climbed down from his chair and chased after the spectator.

It remains unclear if Keothavong caught up with the thief as he chased him out of the court.

Lin will next face Jill Teichmann in the Australian Open second round after the Swiss star beat Great Britain’s Harriet Dart.

Lin, 28, is bidding to reach the third round of a Grand Slam for the first time in her career.

Keothavong ran after them! pic.twitter.com/1QjAc6b7fg

She has not won a WTA Tour event in singles but has won a doubles title – emerging victorious at the Jiangxi Open alongside compatriot Wang Xinyu in September 2019.

Peng Shuai, meanwhile, was the subject of a Wimbledon protest last year during the men’s singles final between Novak Djokovic and Nick Kyrgios.

She disappeared from public view for nearly three months after she alleged on Chinese social media site Weibo in November 2021 that former vice-premier Zhang Gaoli coerced her into having sex.

There was widespread concern over her safety and ability to communicate freely and it temporarily led to the WTA suspending all events in China.