Australian Julian Wilson will surf for a maiden world title against Brazilians Gabriel Medina and Felipe Toledo in the season finale at the prestigious Billabong Pipe Masters in Hawaii.

The world No.2 sits on 51,450 points, level with Toledo and just 4750 points behind leader Medina, with one of 11 events on the World Surf League's Championship Tour remaining. 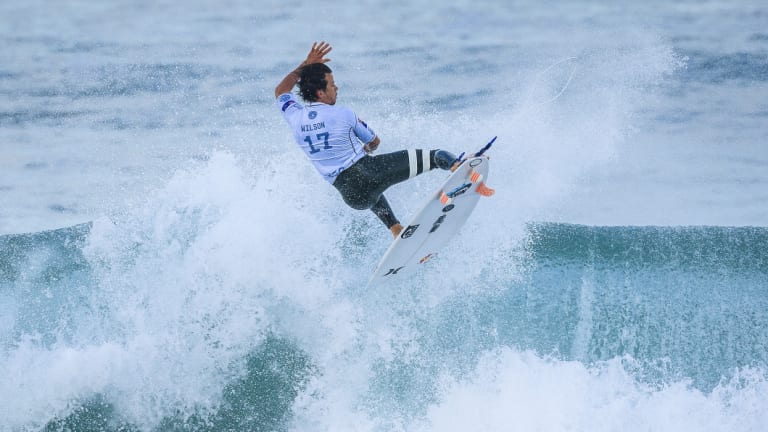 Wilson would be crowned world champion with a victory at the Pipeline event in December, but second place could also hand him the title if Medina fails to make the semi-finals and Toledo does not win it.

Medina had been in the box seat to win his second world title at the Rip Curl Pro Portugal on Saturday after Wilson was eliminated in the quarter-finals by French giant-killer Joan Duru, who had earlier knocked out Toledo.

But the Brazilian world No.1 then faltered himself in a stunning semi-final aerial battle with compatriot and world No.4 Italo Ferreira at the Supertubos beach break.

With just three-and-a-half minutes remaining Ferreira, the Bells Beach and Bali champion, pulled off a stunning 9.30 full air rotation to beat Medina 16.47 to 14.73.

In the decider, Duru's best wave featured two aggressive backhand snaps but it was not enough to overcome Ferreira's air game.

The Brazilian natural-footer first put on a punt for a score of 7.43 before adding another full air rotation to win the final 15.93 to 10.77.

The fact Wilson is even in contention to win the world title is all the more impressive given his rollercoaster pre-season.

The Sunshine Coast local ruptured his AC joint after crashing his mountain bike while training in January.

The following month his wife Ashley gave birth to their first child Olivia. 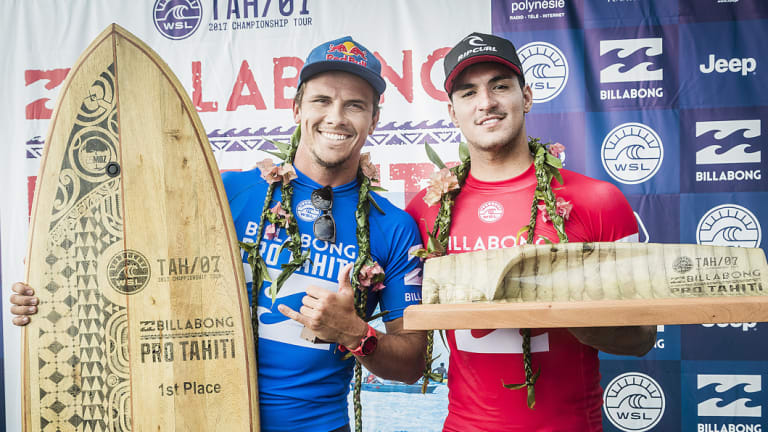 Wilson (left) and Medina, seen here during last year’s event in Tahiti, will battle it out for the title.Credit:World Surf League

He came third at the Oi Rio Pro before winning the Uluwatu CT, which took the place of the cancelled Margaret River Pro.

The Queenslander placed fifth at both the J-Bay Open and the Surf Ranch Pro before his sensational victory at the Quiksilver Pro France last week.

Wilson finished sixth overall in 2015, eighth in 2016 and third last year, meaning this year he's on track for his best ever performance on the Championship Tour.

The waiting period for the Billabong Pipe Masters is from December 8-20.