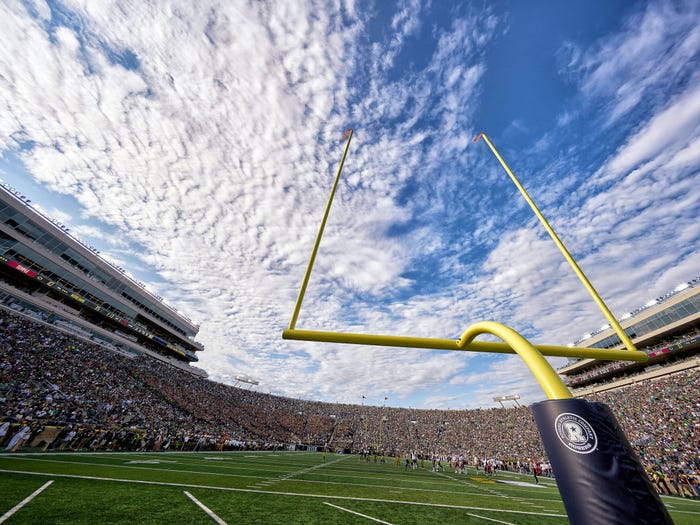 Sarah Fuller isn't the only female kicker in the NCAA.

Simon Fraser University — the only college in Canada affiliated with the NCAA — has its own female kicker on its football team. Kristie Elliott is listed as a redshirt sophomore on the team's roster. Though it doesn't appear she's seen any official game time, the North Vancouver, British Columbia, native is very much an active member of head coach Mike Rigell's squad.

In 2019 — before her first season — Elliott saved the entire team from extra conditioning in the form of sprints by drilling a 30-yard field goal. The football program's official Twitter account shared a clip of the feat — and Elliott's teammates gathering around her to chant "Kristie" after the football soared through the uprights.

She's since received attention for her strong leg on TikTok. In a video, Elliott went kick-for-kick with a soccer player who went viral hitting field goals. She started at 10 yards out and then moved back five yards at a time, drilling kick after kick until she made a 50-yarder. In just 10 days, the clip has earned more than 665,000 likes and 3.5 million views.

Elliott first joined the football team after a wager went in her favor. According to Varsity Letters, one of her now-teammates had bet that she couldn't hit a 40-yard field goal in 2018. At the end of the school year, Elliott gave it a go, and after she made the kick, players on the team attempted to rally her to join their ranks.

Eventually, a video of her 40-yarder in a pair of Vans made its way to then-head coach Thomas Ford. And once he connected with Elliott, Ford invited her to join the team for fall camp. The rest is history.

"I'm still a little in shock about it, but these guys don't intimidate me at all," Elliott told Varsity Letters' Howard Tsumura last August. "At first, I was a little scared, and there is that stigma that football guys are all so scary. But they are all so nice. These guys are all like teddy bears, half of them, and I am an outgoing person, so it's nothing I am afraid of."

All of Simon Fraser's 2020 games were canceled due to the coronavirus pandemic. Still, Elliott will once again have a chance to make her way onto the gridiron for an in-game kick next season.