West Coast's star midfielder Andrew Gaff, the player at the centre of the season's most contentious on-field incident, has called for the introduction of the send-off rule.

Gaff said there was no question he would have been given a red card for his head-high strike on Fremantle's Andrew Brayshaw in round 20 – which saw Brayshaw suffer facial injuries and Gaff suspended for eight matches by the AFL Tribunal – if a send-off rule existed.

"I think the red-card system is the right thing to do,'' said Gaff, whose suspension cost him the opportunity to play in West Coast's premiership and who last weekend decided to stick with West Coast, rather than take up a huge North Melbourne offer. 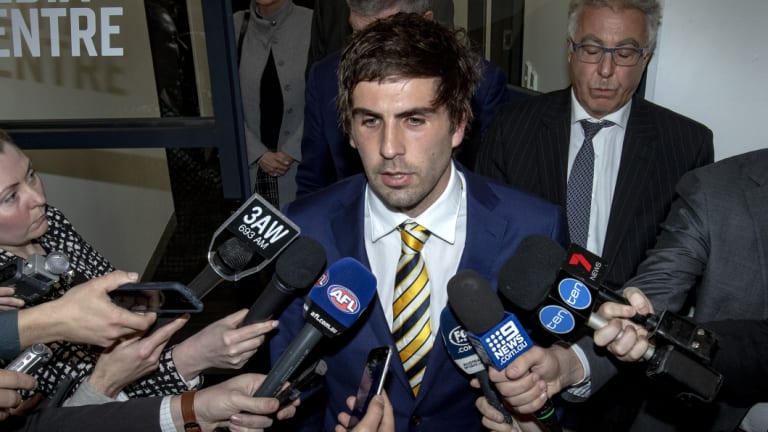 Andrew Gaff at the tribunal after his clash with Andrew Brayshaw.Credit:AAP

"I have no doubt I would have and should have got a red card that day and therefore I wouldn't have been out there,'' the 2018 All-Australian midfielder told Fairfax Media.

Gaff said he had supported the concept of a red card before his incident with Brayshaw, but added that it had to be "obvious'' incidents, perhaps one or two a season. He said the send-off rule should be reserved for incidents in which the victim leaves the field with concussion or an injury and can't return to the field.

But Gaff doubted that the AFL would introduce the red card. AFL football boss Steve Hocking said after the grand final that it would be considered as part of a review of the rules for 2019.

"I just think it might be too big a change. I think footy purists wouldn't have it,'' Gaff said.

"I think it definitely should happen. But it needs to be obvious, where you only see two to three a year.

"I thought red card was a good thing even years before this. Especially if the victim or the person it happens to – Andrew or Callum Mills in the Tom Bugg scenario (in 2017) – if they definitely can't come back for the game, that person should be out as well.''

Gaff suggested that the send-off rule would require someone independent at the ground, "making that call'' probably via video.

Gaff's call for a red card follows Hocking's decision to consider the introduction of a send-off rule.

AFL greats Leigh Matthews and Gerard Healy have, likewise, called for a red card in situations where the victim leaves the field, but AFL chief executive Gillon McLachlan has been on record with his opposition to them – a position based on his concern about the ramifications if mistakes are made.

Gaff, who was singled out for physical attention by Fremantle opponents following the Brayshaw incident in the third quarter, said he had "mentally stopped playing'' after his hit on the Fremantle youngster.

"At that point, I'd mentally stopped playing. Physically, I was fine, could run around, but you know when the Freo guys came at me – I totally understand where they were coming from – I didn't have a leg to stand on.''

But at the time of the incident, Gaff did not think he would miss the remainder of the season, including all finals. The extent of Brayshaw's injuries emerged later.

Gaff said he did not want to "glorify'' the incident that led to his suspension. He said while he had wanted to stay on the field – "I wanted to keep playing and again to stick it out" – he would have been safer off the field.

"I would have been bit safer.

"I don't want to glorify what happened.

While West Coast fans had cheered Gaff during the game after the incident, Gaff – who called the Eagles' faithful "the best fans in the comp'' – questioned whether they would have cheered him had they seen what happened.

"I wonder if they had actually seen what happened, whether they still would have been cheering.''