A cloud hangs over the participation in this year's Cox Plate of the Aidan O'Brien pair Armory, due to be ridden by Ben Melham, and Magic Wand, set to be partnered by Mark Zahra.

Racing Victoria (RV) veterinarians inspected all 14 starters and the emergency for Saturday's $5 million weight for age classic at Moonee Valley and have concerns over the fitness of the Irish duo.

In a statement on Thursday RV said the two gallopers would be monitored again. 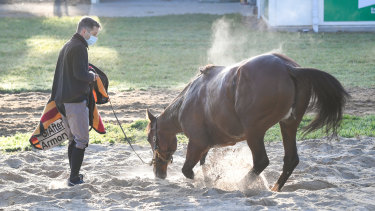 ''RV will provide a further update tomorrow following the completion of the re-inspections which will be conducted by a panel of three veterinarians (two from Racing Victoria and one independent).

''All other horses have been passed fit to race.''

Magic Wand travelled to Australia as part of O'Brien's team last year and finished fourth in the Cox Plate before winning the Mackinnon Stakes at Flemington during the Melbourne Cup carnival.

Should either her or improving northern hemisphere three year old Armory be ruled out of the Cox Plate, it would open the way for Lloyd Williams galloper Buckhurst, controversially left out of the field and named as an emergency, to get a run.

Armory has been in good form with a last start third to two of the world's top horses, Magical and Ghaiyyath, in the Irish Champion Stakes – a performance level which TJ Comerford, O'Brien's representative in Melbourne, said was superior to the form shown by the stable's last Cox Plate winner, Adelaide, back in 2014.

O'Brien has not had much luck with his Cup raiders based at Werribee this carnival: fancied Melbourne Cup candidate Santiago, the Irish Derby winner, will have a break and not run in the big race, it was announced last week, while top sprinter-miler Wichita suffered a leg fracture after a gallop and needed surgery to put a screw in the fracture.

Armory's big race rider Ben Melham went to Werribee for a familiarisation session on Thursday and was sounding confident about his partner's chances.

''He's obviously a classy horse, he has got good style about him, he has a lovely action and he's going into the race in good order. I think he can be very competitive,'' Melham said before news of the vet's concerns came through.

The jockey said he planned to have a tactical discussion with Tipperary based O'Brien overnight to work out a plan which would see the son of Galileo to best effect on the tight Valley circuit.

The jockey will be looking for a group 1 double as he partners Manikato Stakes contender Diamond Effort in the Cox Plate eve feature.

''I think she's capable, she's probably one that wants the rain to come, she grows a leg in it,'' he said of the mare's chances. ''She's drawn down low. I thought she ran well the other day and with even luck in the Moir (won by Friday night rival Pippie) I thought she could have gone close.

''She's shown me there that shes more than capable of performing at group 1 level, I would just like to see a little bit of rain on the friday night to enhance her chances.''

The lack of raceday crowds does make things less taxing for the stars of the show, Melham believes.

''It's a lot easier for the horses, they don't wind up as much without the crowd. It keeps them relaxed, they won't light up so much and be able to conserve their energy more in the run. It won't be disadvantage for them.

''If your horse is relaxed its going to help them run better for you and once you are on the horse it doesn't enter you mind and especially once you leave the barriers.

''A crowd would be lovely for everyone but there's not much we can do about it (although) at times it can feel like you are at trackwork and trials.''