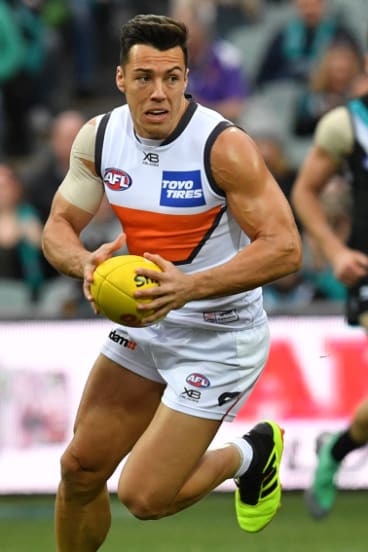 Make me a Don: Dylan Shiel.Credit:AAP

GWS chief executive Dave Matthews believes his club is paying a price for the AFL's decision to scrap the cost of living allowance (COLA) that was previously afforded to Sydney's two sides.

The Giants' salary cap squeeze has been one of the main taking points of the off-season frenzy, especially after they traded Tom Scully for a future fourth-round pick.

GWS stars Dylan Shiel and Rory Lobb have both requested trades, youngster Will Setterfield joined Carlton last week, while Adam Treloar headlines the list of talent to have left in recent seasons.

Matthews denies the expansion club have botched their list management, suggesting they are dealing with the consequences of "being forced to crunch what is a very strong list into a smaller cap than what was anticipated".

The Giants started life in 2012 with a handful of list and salary-cap concessions, which were steadily phased out in ensuing years.

The removal of COLA, announced in 2014 after rivals raged about Sydney's recruitment of Lance Franklin and Kurt Tippett, wasn't part of the league's blueprint for the start-up.

Prior to the change, the Swans and Giants' contracts were topped up with an additional 9.8 per cent COLA.

"It was phased out over 2015 and 2016, completely removed last year. That's $3 million of purchasing power that goes," Matthews told radio station SEN.

"Based on I think a lot of lobbying and some early panic from Victorian clubs about how strong we were going to be.

"COLA was removed essentially off the back of Kurt Tippett and Buddy Franklin going to the Swans … we had nothing to do with either of those two decisions.

"The cost of living in Sydney, and particularly for an expansion team, you need that additional money because the sort of pressure that comes on us to retain our players."

"Ultimately it defeats the purpose of the AFL's investment to try and set up a competition that's well represented in NSW and Queensland," he said.

AFL chief executive Gillon McLachlan denied the Giants had a talent retention problem, opining they have generally lost players because of the salary cap as opposed to young guns wanting out.

"The vast majority have left because of salary cap issues and them managing their list.

"It's a reflection of the amount of talent they've had."