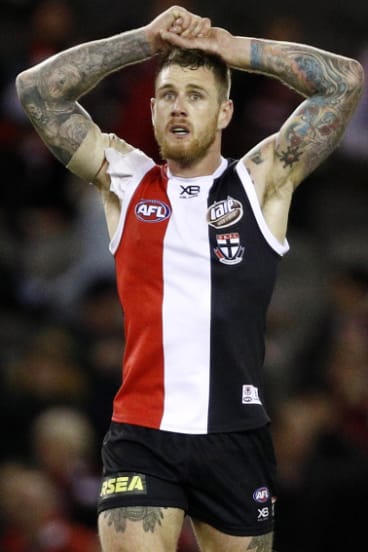 Up against it: St Kilda’s Tim Membrey.

The 2018 season was something of an annus horribilis for St Kilda, and long-suffering Saints devotees probably won’t take any solace from the argument that the red, white and black brigade ended up with the toughest draw of the lot.

Yes, when you’re ensconced on the lower rungs of the table, any combination of opponents can look daunting – even in retrospect – but the reality that four of St Kilda’s five ‘double up’ opponents finished in the top seven slots could be a tough pill to swallow.

On top of that, one of those opponents – outright premiership favourite Richmond – have been a footy outfit hell-bent on proving that last year’s drought-breaking premiership was hardly a one-off, as well as the memory of last year’s stunning 67-point loss to the Saints. It's a result that continues to baffle – and perhaps one that gave the Tigers an element of motivation in 2018.

How, then, can one make the case that St Kilda were on the wrong end of the stick from those at the AFL who undertake the task of creating the league’s very own version of Jenga – the 23-round multi-faceted fixture?

Under a formula that takes into account who your club plays twice, the number of six-day breaks, consecutive six-day breaks, the relative difficulty of road trips – from heading to the new Optus Stadium in Perth to the quirky Shanghai assignment – the value of home-ground advantage against teams on the road, the Saints have ‘won’ the ‘toughest draw category’ under some fresh, 'seasonally adjusted' if you like, crunching of the data.

Last October, when the fixture list was first released, it was already looking bleak for the Saints, ranked behind only West Coast, Adelaide and Richmond for the toughest draw.

After the home-and-away period, however, St Kilda have edged out Sydney and Essendon for top billing.

While the Saints have moved markedly, the most eye-catching swings happened for Brisbane, Sydney and Melbourne – at opposite ends of the spectrum for the Lions and Demons.

In retrospect, Brisbane had a tougher run than first thought, given two of their five ‘double up’ opponents were top four bolters Collingwood and Hawthorn. (And, yes, it’s a perverse statistic that two of Brisbane’s five wins came against the brown and gold).

Melbourne had the biggest ‘swing’, a pre-season score of 59 (determined from the projected ladder spots of the multiple opponents) dropping to just 39. That’s unsurprising when you’re reminded that the Demons enjoyed a second bite against bottom seven teams Adelaide, Western Bulldogs, St Kilda and Gold Coast. And the team that completed Melbourne’s quota, Geelong, scraped into eighth spot, thanks in part to two narrow and thrilling victories over the red and blue.

Under this formula, with its own special dose of herbs and spices, Melbourne have finished only just behind North Melbourne, for the easiest run of the lot, after initially being ranked mid-table.

Onto the warriors of the AFL, the Sydney Swans, who were pipped by the Saints for ‘toughest run’ honours.

Pre-season, the Swans’ fixture was considered only middle-of-the-range. Sydney’s high ranking was also thanks in part to a league-high eight six-day breaks. None of those breaks were consecutive, but the Swans did it the hard way in continuing their remarkable pattern of making the finals almost every time since 2000.

The original formula, which this time 10 months ago left Gold Coast with the most favourable draw, took the approach to weight teams according to a probable ladder for 2018.

Reigning premiers Richmond were expected to finish high on the table again but, based on bookie predictions, were considered only the fourth favourite for the flag and thus only the fourth most difficult opponent. On the same measurement, Adelaide were deemed premiership favourites and ranked the toughest opponent of all. Indeed, the Crows endured the biggest move of all clubs, eventually finishing an ignominious 12th.

But Sydney, GWS, Richmond, Geelong and Melbourne were all given top eight billing by the bookies, so those projections weren’t far off.

One club that did buck expectations was North Melbourne who, after finishing 15th in 2017, were considered favourites for the spoon and an opponent to relish. Full credit to the Kangas.

The AFL fixture list is a tough beast and for some years, league data-crunchers have been grouping clubs in brackets of six, with limitations on matches against teams in and out of their bracket, in an attempt to create a fairer fixture list.

It's worth remembering that in late 2016 Richmond, having just finished 13th, were thus in the bottom third on the fixture ladder. Consequently, they ended up with "double-up" matches against Carlton, Brisbane and Fremantle – three clubs that ended up in the bottom six last year and had three of the bottom four percentage returns.

Now Melbourne, despite only narrowly missing the finals last year on percentage, perhaps – only just perhaps – might reap the rewards from a draw that has worked in their favour.

The occasional blemish aside – read a narrow loss to St Kilda in round 15 – they’ve been able to bank most of the points on offer against the lowly Bulldogs, Gold Coast, St Kilda and Adelaide. It left them in fifth position and a finals series that could be their oyster.

DOING IT TOUGH: FROM FIRST TO LAST