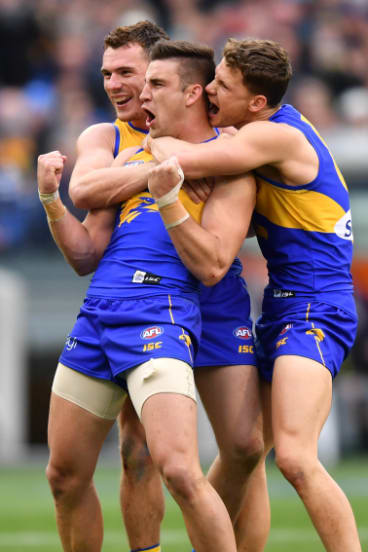 Elliot Yeo kicks a goal in the grand final.

What went right?: Winning the premiership! After starting the year with a bang at 10-1, things looked a little shaky as they lost three games in a row. But Adam Simpson’s men regrouped and won nine of their last 11 games, including one of the great grand finals. The Eagles were ranked fifth both for attack and defence in the league. Their back six, led by Jeremy McGovern, was rock solid, ruckmen Scott Lycett and Nathan Vardy covered the loss of Nic Naitanui seamlessly, the likes of Andrew Gaff, Jack Redden, Elliot Yeo, Luke Shuey and Dom Sheed formed the nucleus of an ominous midfield unit, the injection of Willie Rioli and Liam Ryan (with 48 goals between them) rejuvenated their forward line, Mark Hutchings became a very effective tagger and the one-two punch of Josh Kennedy (43 goals) and Jack Darling (48) proved unstoppable as West Coast finished 13-0 in games they both played in. They also put to bed any concerns over their perceived inability to win interstate, finishing 8-3 outside of WA and 5-0 in Melbourne.

What went wrong?: Injuries and suspension threatened to derail the Eagles’ campaign as key players Ryan (12 games), Kennedy (11), Naitanui (10), Tom Barrass (six), Gaff (six), Shuey (five), Lewis Jetta (five) and Darling (four) all missed chunks of the season. The most significant incidents were Naitanui’s season-ending knee injury against Collingwood in round 17 and Gaff’s brain fade in round 20 that saw him break Fremantle youngster Andrew Brayshaw’s jaw and cop an eight-week ban that doesn’t expire until round three next year.

Likely best and fairest: After 20 rounds, Gaff was on track to win his second John Worsfold Medal but it’s now probably a battle between Yeo, Redden, McGovern and Shuey. Yeo appears to be the best bet given he took his game to another level again this season, racking up career-high disposals, contested possessions, tackles, clearances and inside-50s. The 25-year-old averaged 24.6 touches (12.4 contested), 6.7 tackles, 4.3 clearances and 5.3 inside-50s a game while kicking 14 goals. He finished the year ranked third in the competition for tackles, second for inside-50s and 10th for contested possessions while being ranked second for disposals and third for clearances at West Coast.

The one thing they need?: With Naitanui unavailable for most of 2019 and Lycett almost certainly heading to Port Adelaide, a ruckman is a high priority for the Eagles which is why they have been linked to Rory Lobb, Jordan Roughead and Tom Hickey in recent weeks.