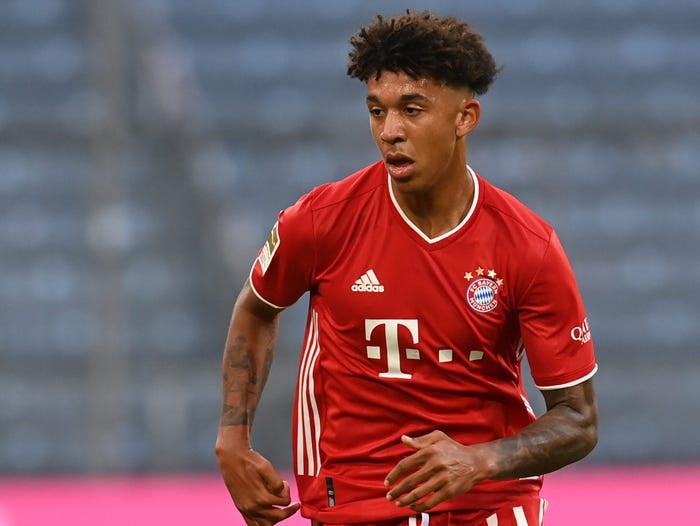 US soccer wunderkind Chris Richards says being at Bayern Munich is "special" because he gets to train and play alongside the world's best soccer players day-in and day-out.

Richards, who initially joined Bayern on-loan after a successful 10-day trial in July 2018, has been a familiar face in Bayern's first team this season, making three appearances for Hans-Dieter Flick's side, while being an unused substitute in two other games.

In his most recent appearance, the 20-year-old American provided a fine assist for Robert Lewandowski, teeing up the the Pole for his second of four goals on the night in a 4-3 win over Hertha Berlin.

"Me being at Bayern is a very special feeling because they are by far one of the most prestigious clubs in the world," Richards, now 20, told Insider of life at the Allianz Arena.

"It's amazing to be able to train with these world class players every day. Players who have won the World Cup, the Champions League, national titles – the list goes on.

Richards is one of a rising number of American soccer talents choosing to learn their professional trade in Germany, rather than staying at home. Fellow youngsters include RB Leipzig's Tyler Adams, Borussia Dortmund's Gio Reyna, Werder Bremen's Josh Sargent, and Weston McKennie, who moved from Germany to Italian champions Juventus this summer.

"As an American it's an even better feeling because there's a very short list of us who are playing here in Germany and wider Europe. It makes me want to be my best every day, showing I can play my position better than any other player, no matter what their nationality is."

Unfortunately for Richards, a calf injury sustained in the game against Hertha in October saw him sidelined for two weeks, and he is yet to feature for the first team again since, instead playing three times for the club's second team.

That hasn't, however, stopped him receiving his first call-up for the United States Men's National Team, having been named in Gregg Berhalter's side for the upcoming friendly game against against Wales in London next week.

"When I got the call that I was invited to camp, I was ecstatic. It's something I worked my whole life for," Richards told CBS of his call-up.

He added: "My involvement with this upcoming camp, I think if I play like I usually play and train how I usually do, I'll get my shot. There is no guarantees, but I think I have a really good chance of playing once I get there."

As for getting back into Bayern's first team – Richards is pretty confident of that, too, given that he is often tasked with marking Lewandowski in training.

"I'm confident in myself. I know that him being one of the best strikers in the world, nothing's expected of me when we go up against each other in training, so I just want to show everybody that I can be that young American guy that turns down Lewandowski in training," Richards said in an interview with SiriusXM.

Bayern next faces rivals Borussia Dortmund at the Westfalenstadion on Saturday.