YouTube ‘kidfluencers’ are being paid millions to promote junk food and sugary drinks to other children in their videos, study shows

Children with popular YouTube channels, known as ‘kidfluencers’, are being paid to promote junk food and sugary drinks in their videos, a study reveals.

Researchers from New York University School of Global Public Health analysed the five most-watched YouTube kidfluencers, their most popular videos and the presence of branded food in the videos.

The kidfluencer videos featuring food and drinks were viewed 1 billion times – and the overwhelming majority of these (90 per cent) featured junk food from unhealthy brands, such as McDonald’s, they found.

The highest-paid YouTube kidfluencer of the past two years is Ryan Kaji – a nine-year-old from Texas who appears in his own YouTube series, called Ryan’s World. 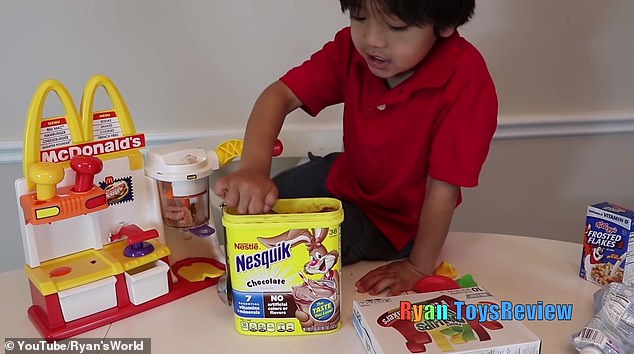 Ryan Kaji (pictured) is a nine-year-old from Texas who appears in his own YouTube channel, Ryan’s World. He’s the highest-paid YouTube influencer of the past two years, earning $26 million last year. But some of his videos contain junk food brands. According to researchers, food companies are interested in paying influencers to feature in their popular videos

But fast food companies are increasingly interested in inserting their products into these videos, which are hugely popular with children.

It’s thought that watching unhealthy food advertising increases the calories children eat by triggering cravings and subconsciously directing them to the larder.

WHAT IS THE UK’S BAN ON JUNK FOOD ADS?

The government will be banning junk food ads on TV between 5:30am and 9pm every day.

The measure, which has not yet come into force, was announced in July.

The government also launched a consultation over a total ban on junk food advertising online.

The measures will help cut child obesity and overweight figures.

Children carrying extra weight are more likely to develop type 2 diabetes, heart disease, cancer or have a stroke in adulthood.

Junk food adverts during children’s TV programmes have been banned since 2007.

In the UK, the government is cracking down on junk food ads on TV by implementing a 9pm watershed.

But companies have dramatically increased online advertising in response to consumers’ growing social media use.

Authorities will need to do more to limit children’s exposure to junk food ads online, the experts claim.

‘Kids already see several thousand food commercials on television every year, and adding these YouTube videos on top of it may make it even more difficult for parents and children to maintain a healthy diet,’ said Marie Bragg at New York University School of Global Public Health.

‘The allure of YouTube may be especially strong in 2020 as many parents are working remotely and have to juggle the challenging task of having young kids at home because of Covid-19.

‘We need a digital media environment that supports healthy eating instead of discouraging it.’

YouTube, which is the second most visited website in the world after Google, is a popular destination for kids seeking entertainment.

Kidfluencer videos have caught the attention of some of these companies, who advertise or sponsor posts to promote their products during videos. 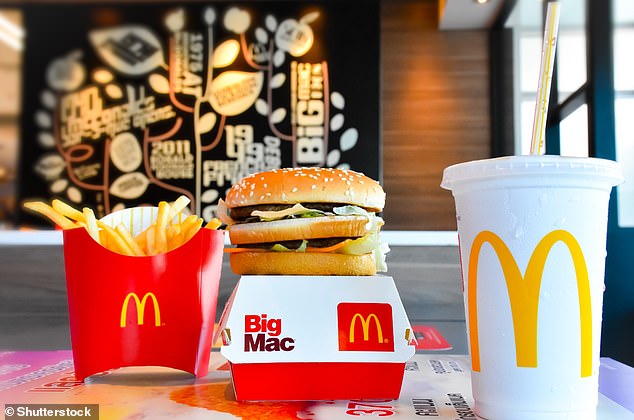 Kid influencers’ YouTube videos were collectively viewed more than 48 billion times, and videos featuring food and/or drinks were viewed 1 billion times. Most were unhealthy branded items, such as those from McDonald’s

‘Parents may not realise that kid influencers are often paid by food companies to promote unhealthy food and beverages in their videos,’ said Bragg.

Researchers used data from AI marketing firm Socialbakers to identify the five most-watched kid influencers on YouTube in 2019, whose ages ranged from 3 to 14 years old, and analysed their most-watched videos.

The team searched for 50 of their most-watched videos and 50 of their videos that featured food and drinks on the thumbnail image of the video.

Focusing on a sample of 418 YouTube videos, they assessed whether kid influencers consumed or played with food or toys, quantified the number of minutes food and drink appeared and recorded names of branded food and drinks.

The team then assessed the nutritional quality of foods using the UK Department of Health’s Nutrient Profile Model and identified the number of drinks with added sugar.

The researchers found 42.8 per cent of the most-popular videos from kid influencers promoted food and drinks and more than 90 per cent of these products were unhealthy branded food, drinks, or fast food toys.

Fast food was the most frequently featured junk food, followed by sweets and fizzy drinks.

The fact the videos featuring junk food product placements were viewed more than 1 billion times is a ‘staggering level of exposure’ for food and beverage companies, the team say.

‘Our study is the first to quantify the extent to which junk food product placements appear in YouTube videos from kid influencers,’ said Bragg.

‘It was concerning to see that kid influencers are promoting a high volume of junk food in their YouTube videos, and that those videos are generating enormous amounts of screen time for these unhealthy products.’

Researchers do not know which food and drink product placements were paid endorsements.

But these videos are problematic for public health because they let food companies subtly promote unhealthy foods to young children and their parents. 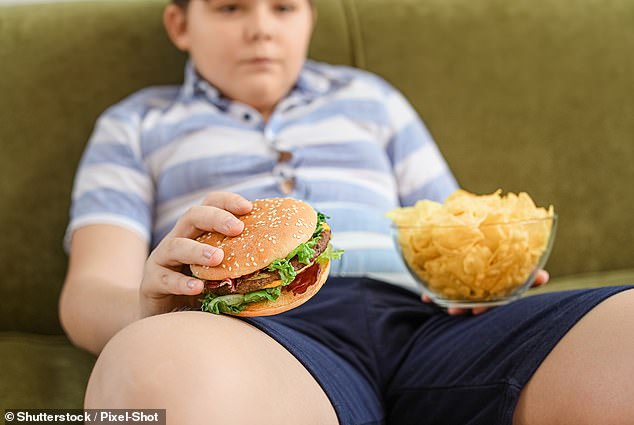 The UK is moving to ban junk food ads on TV before 9pm in the evening. The government also launched a consultation over a total ban on junk food advertising online

‘It’s a perfect storm for encouraging poor nutrition – research shows that people trust influencers because they appear to be “everyday people” and when you see these kid influencers eating certain foods, it doesn’t necessarily look like advertising,’ said Bragg.

The National Academy of Medicine and World Health Organisation identify food marketing as a major driver of childhood obesity.

The researchers encourage federal and state regulators to strengthen and enforce regulations of junk food advertising by kid influencers.

‘We hope that the results of this study encourage the Federal Trade Commission and state attorneys general to focus on this issue and identify strategies to protect children and public health,’ said study author Jennifer Pomeranz at New York University.

MailOnline has contacted Google, which owns YouTube, about the findings of the study, which has been published in the journal Pediatrics.

THE LINK BETWEEN JUNK FOOD AND TV

A Cancer Research UK survey in 2018 of almost 2,500 children found those who used the internet or watched commercial television for more than half an hour a day were more likely to ask for, buy or eat junk food.

Experts found youngsters who watched more than three hours of commercial TV a day ate an average of ten extra snack items, such as crisps, biscuits or fizzy drinks, a week compared with those who watched very little TV.

However, when they watched TV without adverts, there was no link between screen time and the likelihood of eating more junk food.

Researchers found the primary school-age children surveyed spent an average of 16 hours a week on the internet.