Healthy food options could be made appealing by zapping neurons to ‘reprogram’ your brain into preferring, for example, fruit over chocolate, a study has suggested.

When faced with any choice, each alternative causes a different set of nerve cells to fire in your brain — and the more appealing a given option, the faster this activity.

Working with monkeys, experts from the US found that these neurons encode the values of the different options as the brain works to reach a decision.

Moreover, by changing the activity of the neurons, the researchers were able to influence the monkeys’ decisions and guide them towards a given choice.

The findings may pave the way to new treatments for addiction, eating disorders, depression and other conditions involving faulty decision-making. 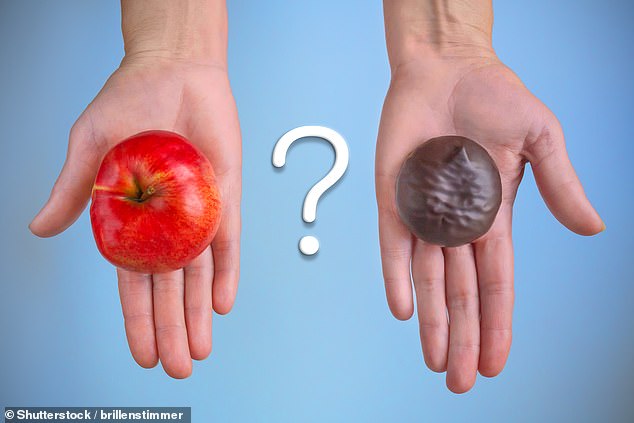 Healthy food options could be made appealing by zapping neurons to ‘reprogram’ your brain into preferring, for example, fruit over chocolate, a study has suggested (stock image)

‘In a number of mental and neuropsychiatric disorders, patients consistently make poor choices, but we don’t understand exactly why,’ said neuroscientist and paper author Camillo Padoa-Schioppa of the Washington University in St. Louis.

‘Now we have located one critical piece of this puzzle. As we shed light on the neural mechanisms underlying choices, we’ll gain a deeper understanding of these disorders.’

In 2006, Professor Padoa-Schioppa and colleagues revealed in a paper in Nature that they had discovered — in a region of the brain above the eyes known as the ‘orbitofrontal cortex’ — the neurons that weigh up each option in a given choice.

At that time, however, the researchers were unable to prove that it was the valuations encoded in these neurons that directly led to one choice being made over that of the others available.

‘We found neurons encoding subjective values, but value signals can guide all sorts of behaviours, not just choice. They can guide learning, emotion, perceptual attention, and aspects of motor control,’ explained Professor Padoa-Schioppa.

‘We needed to show that value signals in a particular brain region guide choices.’ 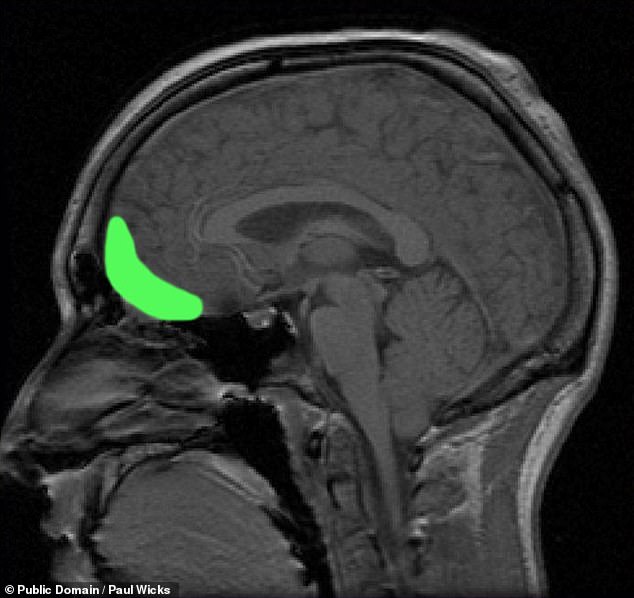 In 2006, Professor Padoa-Schioppa and colleagues revealed that they had discovered — in a region of the brain above the eyes known as the ‘orbitofrontal cortex’ (pictured in green on the above MRI scan) — the neurons that weigh up each option in a given choice

In their latest study, the team ran two sets of experiments with monkeys — which were presented with a choice of two drinks and were given the one they glanced at.

Each option featured a different drink — including lemonade, peppermint tea, salted water, fruit punch and various flavours of juice — but also in a different amount.

This ensured that the choices were not simple, for while each monkey would often prefer a given flavour, they also liked to get as much to drink as possible.

Having identified the neurons in the orbitofrontal cortex that were activated as the monkeys picked their drinks, the team next used implanted electrodes to painless stimulate these nerve cells as the animals made further choices.

They found that running a low current through the electrodes caused the neurons involved in both options to fire faster and, from the monkey’s point-of-view, made both options seem more appealing — but one more so, in a predictable manner.

In the second experiment, the monkeys were presented with each drink choice one-at-a-time, rather than together.

The team found that delivering a higher current when one choice was offered disrupted the value-assigning process — making the monkey much more likely to choose the other option instead.

The findings not only prove that values processed in the neurons of the orbitofrontal cortex are key to decision making, but that they can also be manipulated.

‘When it comes to this kind of choices, the monkey brain and the human brain appear very similar,’ Professor Padoa-Schioppa said.

‘We think that this same neural circuit underlies all sorts of choices people make  such as between different dishes on a restaurant menu, financial investments, or candidates in an election.’

‘Even major life decisions like which career to choose or whom to marry probably utilize this circuit,’ he added.

‘Every time a choice is based on subjective preferences, this neural circuit is responsible for it.’

WHAT IS A NEURON AND HOW DOES IT WORK?

A neuron, also known as nerve cell, is an electrically excitable cell that takes up, processes and transmits information through electrical and chemical signals. It is one of the basic elements of the nervous system.

All neurons are electrically excitable. The electrical impulse mostly arrives on the dendrites, gets processed into the cell body to then move along the axon.

On its all length an axon functions merely as an electric cable, simply transmitting the signal.

Once the electrical reaches the end of the axon, at the synapses, things get a little more complex.

The key to neural function is the synaptic signalling process, which is partly electrical and partly chemical.

Once the electrical signal reaches the synapse, a special molecule called neurotransmitter is released by the neuron.

This neurotransmitter will then stimulate the second neuron, triggering a new wave of electrical impulse, repeating the mechanism described above.