Shining a light on the secrets of ancient Egyptian mummies: Researchers use lasers and X-Rays to unlock the story of daily life for humans thousands of years ago

Modern technology is ‘shining a light’ on what daily life was like in ancient Egypt by using lasers, X-rays, and infrared to examine the bones of mummies.

A number of bone samples dating back between 2,000 and 4,000 years have been tested using the Advanced Light Source at Berkeley Labs in California.

It works by subjecting the bones to various wavelengths of bright light that can be used to explore the chemistry, structure and other properties of the samples.

‘The bones are acting like an archive,’ said Mohamed Kasem from Cairo University who worked on the study. 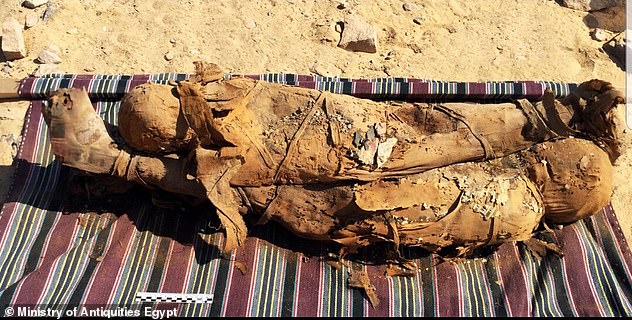 Researchers examined bone fragments from across four ancient Egyptian dynasties ending about 2,000 years ago at the Greco-Roman period when this mummified mother and child were thought to have been embalmed

The researchers made ‘very thin slices’ of femur bones as part of the study, which they hope will be able to show how people lived, their diet, health and daily lives.

A number of discoveries into the way the people of ancient Egypt lived are already being revealed thanks to the research – although a lot more time is needed to analyse the data, said Dr Kasem.

The team used a chemical-analysis technique, where a short laser pulse blasts away a small volume of material from a sample.

The emitted light from the blast is then studied to determine what elements are present.

‘We have found lead, aluminium, and other elements that give us an indication of the environment and the toxicity of that time. That information is stored right in the bones,’ Dr Kasem said.

For example, while the ancient Egyptians didn’t use aluminium in metal-working, researchers have found that they used potassium alum, a chemical compound containing aluminium, to reduce cloudiness in drinking water.

The team used X-rays to study how the collagen in the bones of the mummies compare to modern humans.

When an X-ray is shined through the collagen the X-rays are scattered and the pattern of scattering they make can show researchers how healthy and well preserved the collagen is.

The collagen assemblies generally aren’t as well ordered in the ancient samples as in healthy modern bones, said Eric Schaible, a Berkley scientist. 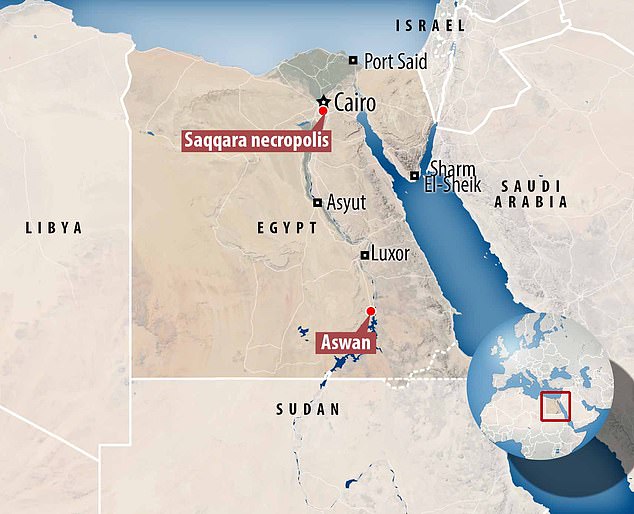 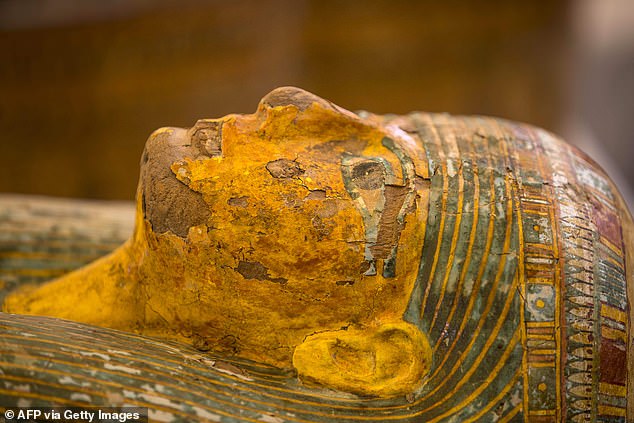 A number of discoveries about the way the people of ancient Egypt lived are already being revealed thanks to the research, although a lot more time is needed to analyse the data

The samples were brought over from Egypt by scientists from Cairo University and represent four different dynasties in Egypt: the Middle Kingdom, Second Intermediate Period, Late Period and Greco-Roman period.

They have also examined soils taken from burial sites of the human remains.

‘So many factors affect the preservation. One of them is how long the bone has been buried in soil and also the state of the bone and the different types of soil,’ said Dr Kasem.

Differences in embalming techniques could also affect the preservation of the bone and the chemistry they find in the X-ray studies.

‘There are different qualities in the materials, like the cloth and the resins they used to embalm,’ he said.

The soil samples will help distinguish whether chemical concentrations in the bone samples were related to the individuals’ health, diet, and daily lives, or whether the chemicals in the soil had changed the bones’ chemistry over time.

It’s hoped the research into the way the soil interacts with the bones could help in future projects to preserve mummified remains.

‘It’s very exciting to be involved in this project, and to learn about the journey these mummies have been on, in life and after death,’ Dr Schaible said.

HOW DID ANCIENT EGYPTIANS EMBALM THEIR DEAD?

It is thought a range of chemicals were used to embalm and preserve the bodies of the dead in ancient cultures.

Russian scientists believe a different balm was used to preserve hair fashions of the time than the concoctions deployed on the rest of the body.

Hair was treated with a balm made of a combination of beef fat, castor oil, beeswax and pine gum and with a drop of aromatic pistachio oil as an optional extra.

Mummification in ancient Egypt involved removing the corpse’s internal organs, desiccating the body with a mixture of salts, and then wrapping it in cloth soaked in a balm of plant extracts, oils, and resins.

Older mummies are believed to have been naturally preserved by burying them in dry desert sand and were not chemically treated.

Gas chromatography/mass spectrometry (GC/MS) techniques have been deployed in recent years in find out more about the ancient embalming process.

Studies have found bodies were embalmed with: a plant oil, such as sesame oil; phenolic acids, probably from an aromatic plant extract; and polysaccharide sugars from plants.