World’s largest moth is seen in the US for the first time: The insect, which is bigger than a grown man’s HAND, was found hanging on to a garage door in Washington

The world’s largest moth has been spotted in Washington state, which is some 2,000 miles away from its natural habitat in the tropics.

Its wingspan measure 10 inches, the previous record holder clocked in at 9.8 inches, and was found hanging on to a garage door in Bellevue that sits on the eastern shore of Lake Washington.

Known as an atlas moth, the insect is a federally quarantined pest, which makes it illegal to purchase or sell the moths in any form, from eggs to adults, without a permit.

The Washington homeowner reported it to Washington State Department of Agriculture (WSDA), which is urging residents to be on the lookout to help them determine if there are others in the area.

The atlas moth can be detrimental to US native vegetation because it only consumes leaves of host plants rather than flowers, woody stems and roots, like other moths. 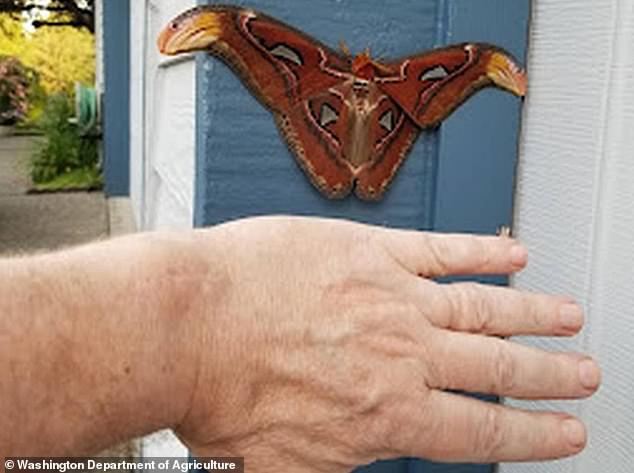 The worlds largest moth was spotted on a garage door in Washington state. Known as the atlas moth, its natural habitat is the tropics

Residents are encouraged to photograph, collect and report atlas moths if they are seen. The moths do not pose a public health threat and thus can safely be photographed, handled and collected.

Sven Spichiger, WSDA managing entomologist, said in a statement: ‘This is a ‘gee-whiz’ type of insect because it is so large.

‘Even if you aren’t on the lookout for insects, this is the type that people get their phones out and take a picture of – they are that striking.’

The moth was initially reported to WSDA on July 7 and entomologists identified it as an atlas moth and sent images of the insect to the US Department of Agriculture (USDA) Animal and Plant Health Investigation Service confirmed the specimen as an atlas moth on July 27 and it is believed to be the first confirmed detection of the moth in the United States. 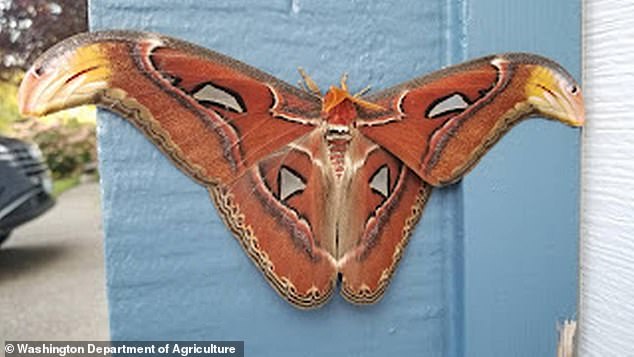 Not only is this the first atlas moth reported in the US, but its 10-inch-long wingspan makes it the largest moth in the world

‘This is normally a tropical moth. We are not sure it could survive here,’ Spichiger said.

‘USDA is gathering available scientific and technical information about this moth and will provide response recommendations, but in the meantime, we hope residents will help us learn if this was a one-off escapee or whether there might indeed be a population in the area.’

It is believed the moths got their name because the patterns on their wings resemble maps.

Another theory states the moth was named after the Titan Atlas who was condemned by Greek god Zeus to hold the sky upon his shoulders.

This relates to its large wingspan and the idea that they are a burden on the insects. 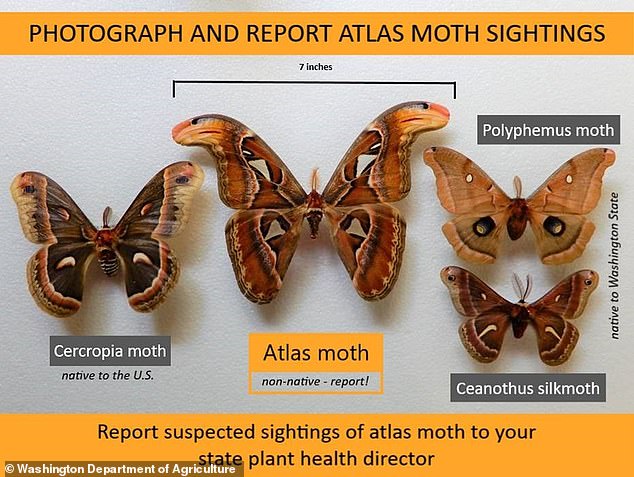 Center is an atlas moth with just a seven-inch-long wingspan, but it is much larger than those found in the US

Female atlas moths are much bigger than males and attract mates by secreting irresistible pheromones through the end of their abdomens.

The males sniff these out with a long, feathery antennae.

The moths lay their eggs underneath leaves. Bluish green caterpillars, covered in a white powder, then hatch a week or two later and start eating.

Their favorite meals include the Jamaican cherry tree, lime and citrus fruits. The creepy crawlies then encase themselves in a silken cocoon. The pupal stage lasts for around a month.

Male adults don’t have a mouth and survive from fat reserves built up from their caterpillar stage.