Women with the faulty breast cancer gene BRCA have, on average, a 35 per cent risk of developing breast cancer, a new study claims.

It revealed that for women with either BRCA1 or BRCA2, the chance of getting diagnosed with breast cancer by the age of 75 ranges from 13 to 76 per cent.

The study found the presence of either gene did increase the likelihood of developing breast cancer, but by how much varies considerably by individual.

For women without this mutated gene, the average risk was 10 per cent, but ranges from 3.3 per cent to 29.6 per cent.

The team say a ‘polygenic risk score’ – a measure of overall genetic variations in a woman’s DNA – can provide a better indication of disease risk than the presence of the single mutation.

In 2013, actress Angelina Jolie decided to undergo a double mastectomy – surgery to remove both breasts – after after learning she had a BRCA1 mutation.

She was told at the time that her risk of developing breast cancer was 87 per cent. 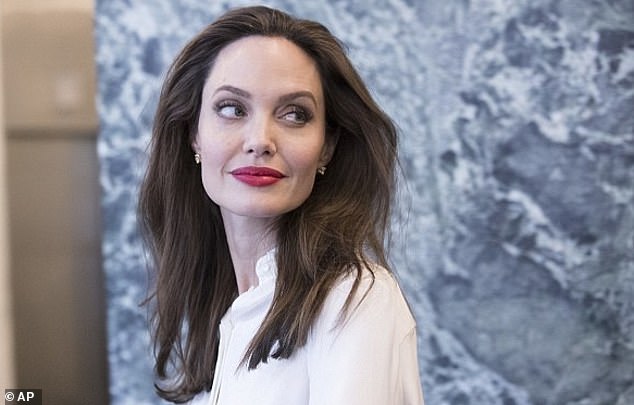 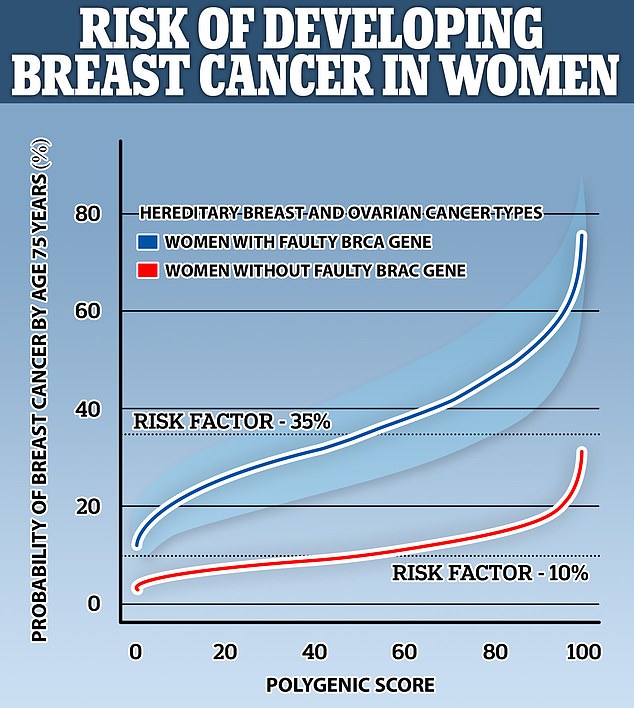 Pictured, a graph showing the risk for women with a BRCA mutation (blue) and without it (black). The average risk is 35 and 10 per cent, respectively. However, the range for people with the variant sans from 13 per cent to 76 per cent

‘For breast cancer, whether a woman’s risk is 13 per cent or 76 per cent may be very important in terms of whether she chooses to get a mastectomy or undergo frequent screening via imaging.’

Roughly 50 per cent of at-risk women with faulty BRCA gene are having mastectomies currently, Khera estimates.

The team are not advising against having a mastectomy, but highlighting the possible improvements in risk estimation and the importance of shared decision making between patients and their doctors.

‘Whether the risk is 13 or 76 per cent seems quite important,’ he said.

‘As an example someone with lower risk might choose to have frequent imaging early on with mastectomy later in life when risk increases.’

The majority of hereditary breast cancers are due to mutations in two genes, BRCA1 and BRCA2.

Everybody has these genes, which repair damage to cells and inhibit abnormal cell growth.

But identifying a faulty version of these genes can prompt the difficult decision to undergo a mastectomy as a preventative measure.

Having a mutated BRCA gene – as famously carried by Angelina Jolie – dramatically increases the chance a woman will develop breast cancer in her lifetime.

Between one in 800 and one in 1,000 women carry a BRCA gene mutation, which increases the chances of breast and ovarian cancer.

Both BRCA1 and BRCA2 are genes that produce proteins to suppress tumours. When these are mutated, DNA damage can be caused and cells are more likely to become cancerous.

The mutations are usually inherited and increase the risk of ovarian cancer and breast cancer significantly.

When a child has a parent who carries a mutation in one of these genes they have a 50 percent chance of inheriting the mutations.

About 1.3 per cent of women in the general population will develop ovarian cancer, this increase to 44 percent of women who inherit a harmful BRCA1 mutation.

Around one in 250 women in the UK carry a BRCA1 or BRCA2 mutation.

Looking at three diseases in total – heart disease and two types of cancer – the researchers analysed genetic and clinical information from 80,298 individuals.

The team took into account their polygenic score, which accounts for the small contributions from many common genetic variants for disease spread throughout the genome.

They then judged whether the individual developed disease or not through their medical records over time.

The team discovered that for some people with these high-risk single-gene variants, such as a mutated BRCA1, having a low polygenic score is an indicator of a lower risk of disease.

Meanwhile, in a small subset of people with a high-risk or ‘monogenic’ single-gene for all three diseases, a high polygenic score more than doubled their overall disease risk, from an estimated average of 35 to 41 per cent up to 80 per cent.

As well as offering a way to more accurately interpret patients’ genetic risk of disease, a polygenic score can also help explain why some genetically predisposed individuals do not develop the disease.

The study could guide more informed decision-making and genetic counselling in clinical practice – such as more accurately identifying patients who should undergo more frequent disease screenings.

‘Patients and clinicians often assume that having a high-risk variant makes eventually getting the disease all but inevitable, but an important subset actually go on to live their lives normally,’ said study author Akl Fahed, also at Massachusetts General Hospital.

‘The traditional approach is to focus on a single base pair mutation linked to disease, but there are 3 billion base pairs in the genome.

‘So we asked whether the rest of your genome can help explain the differing rates of disease we see in these patients, and the answer was a clear yes.’ 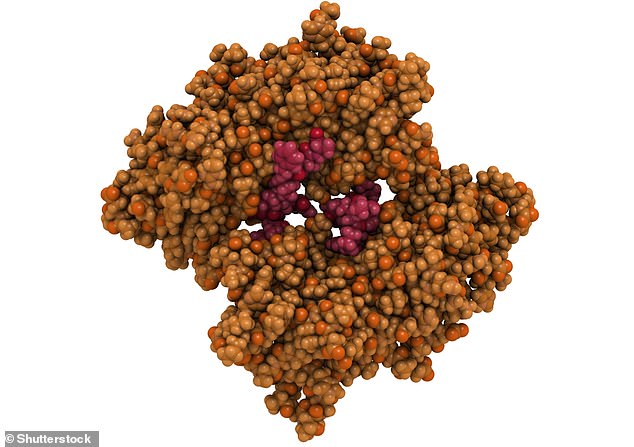 The study focused on three diseases – familial hypercholesterolemia, where single-gene variants stop the body from clearing cholesterol from the bloodstream, which can increase risk of a premature heart attack, Lynch syndrome, where a fault in DNA-repair genes often leads to colorectal cancer, as well as hereditary breast cancer.

The chances of those with Lynch syndrome developing colorectal cancer ranged from an estimated 11 to 80 per cent depending on various genetic factors.

For coronary artery disease the risk varies from 17 per cent to 78 per cent.

This autumn, the clinic will begin offering a clinical test that assesses both monogenic and polygenic risk for heart disease.

‘We are thrilled to be able to offer state-of-the-art genetic risk assessment to our patients in the coming months,’ Khera said.

‘One of our next steps is to educate doctors and patients on more advanced types of genetic risk predictors such as polygenic scores.’

However, genetics ‘is only part of the story,’ according to Fahed.

‘For heart disease, risk involves other factors like blood pressure and lifestyle risks such as smoking.

‘It is important to account for these as well and develop more fully integrated risk models.’

Khera also added that the ability to reliably classify the population using polygenic scores is higher in people of European ancestry as that is where most of their training data has come from.

‘So we need to diversify datasets and improve the models so that they work well for people from different ancestries, ensuring that genomic risk stratification benefits everyone,’ he said.

The new study has been published in the journal Nature Communications.

Angelina wanted to be proactive and minimise her risks, so made a decision to have a preventative double mastectomy – which involves the surgical removal of both breasts.

But it is important to emphasise that each woman’s case is different. Surgery will not necessarily be the right choice for everyone: alternatives include taking anti-oestrogen chemo-preventive drugs which can reduce the risk of breast cancer, or a rigorous programme of surveillance, including imaging and regular breast exams.

Just because you have an elevated risk doesn’t mean you follow a one-size-fits-all protocol.

On February 2, 2013, Angelina had her first operation, a procedure known as nipple delay, which rules out disease in the breast ducts behind the nipple and draws extra blood flow to the area, increasing the chance of saving the nipple.

Angelina’s skin was slightly bruised but soon returned to normal.

On February 16 she had the main surgery, which can last up to eight hours, and it went smoothly.

After the mastectomies, the plastic surgeon performed the first-stage breast reconstruction by placing tissue expanders with allograft – creating a hammock into which the implant fits.

When the pathology results returned, all of the breast tissue was benign.

I believe that recovery reflects expectation. Angelina expected to feel well, to be active. On day four after her mastectomies she was not only in good spirits, with bountiful energy, but with two walls in her house covered with freshly assembled story boards for the next project she was directing.

All the while she spoke, six drains dangled from her chest, three on each side, fastened to an elastic belt around her waist.

The next day she had her first injection of saline into the expanders, beginning the process that would gradually prepare the tissues for the final reconstruction stage.

A second saline fill occurred on March 4. Over the next four weeks she was hard at work.

The final operation occurred on April 27, 2013, ten weeks after the mastectomies: reconstruction of the breasts with implants, which went extremely well, bringing an end to her surgical journey.

I would urge women like Angelina – who feel they might be at risk of a BRCA gene mutation – to seek medical advice and to take control of their futures.