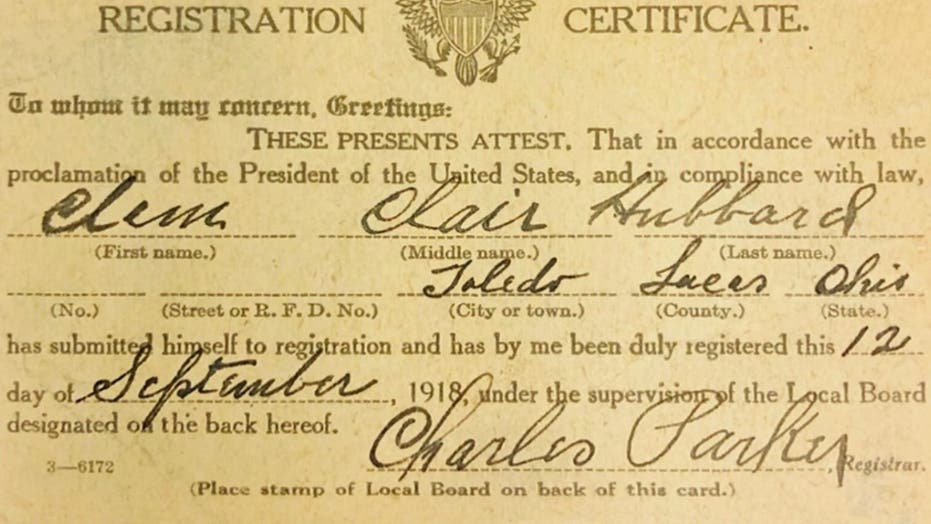 ‘War to end all wars’: How World War I still resonates today

As the world marks the 100th anniversary of the armistice that ended World War I, the National World War I Museum and Memorial serves as a reminder of the sacrifices U.S. troops made in ‘The Great War.’ Eric Shawn reports from Kansas City, Missouri.

When Christy Limauro purchased an old family Bible at a library book sale in Toledo, Ohio, she was intrigued to find a small brown card tucked inside.

The card turned out to be a World War I draft registration card that contained the details of a Toledo resident named Clem Clair Hubbard. Limauro set out to trace Hubbard’s descendants and return the card to them.

“Using a 1940 census online, she found the names of his wife and children,” explained the Toledo Lucas County Public Library, in a blog post. “The Library’s Local History and Genealogy Department staff provided her with obituaries for some of Hubbard’s children that led to additional names.”

Limauro then sent a message to Hubbard’s grandson and some other relatives. “After a couple weeks, Limauro called Hubbard’s grandson, Ed McPeek of Las Vegas, and was elated to hear back,” the library explained in the blog post. McPeek’s granddaughter had seen the message and linked her grandfather and Limauro. 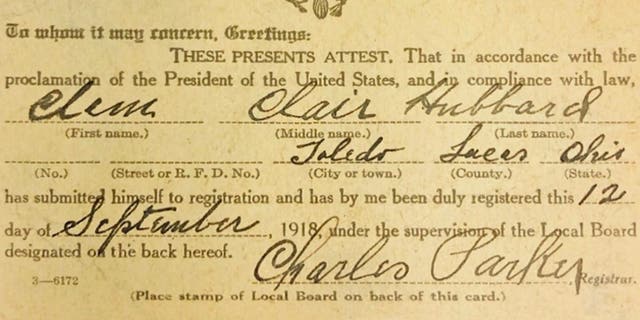 The card, which had spent decades tucked inside the family Bible, has now been returned to Ed McPeek.

“I am so happy to say that I will be able to pass this family memento on to Ed and his family,” Limauro said, according to the blog post. “I hope some day to be able to meet Ed and [his wife] Debbie in person and hear more about their family and their history in our area.”

“Ed McPeek remembers the distinctive green Bible at the Toledo home of his grandparents, Clement and Mayme Hubbard, until his grandfather’s death in 1964,” the library said in its blog post. “It then passed to his parents, Helen and Kenneth McPeek, in Ottawa Lake, Michigan. After Ed McPeek’s father died, the Bible was donated to St. Michael’s Lutheran Church.”

The Bible ended up in the Friends of the Library book sale at the Sylvania branch of the Toledo Lucas County Public Library, where it was bought by Limauro.

Other Bibles have been garnering attention in recent years. A Bible marked with bullet holes from a German machine gun helped save the life of a British World War I soldier, his daughter explained last year.

In 2016, the Museum of the American Revolution in Philadelphia purchased an extremely rare Bible from the Battle of Bunker Hill. The King James Bible, which is on display in the museum, is inscribed by American soldier Francis Merrifield, who thanks God for sparing his life in the bloody 1775 battle.

Also in 2016, a historian in the U.K. discovered secret notes hidden in the text of England’s first printed bible. Analysis of the Latin Bible, which was published in 1535 by Henry VIII’s printer, has revealed fascinating English annotations made during the 16th-century Reformation.