Howl at the full ‘micromoon’: January’s wolf moon tonight will be smaller than normal because it’s at the furthest point from Earth – 251,910 miles away

This rare display comes as the moon is at its furthest point from Earth, sitting 251,910 miles away, which gives it a smaller appearance to humans on the ground.

Skygazers will want to step outside at 6pm ET to see the moon at its fullest, but if you miss this event, the next one will be the ‘Snow Moon’ on February 5. 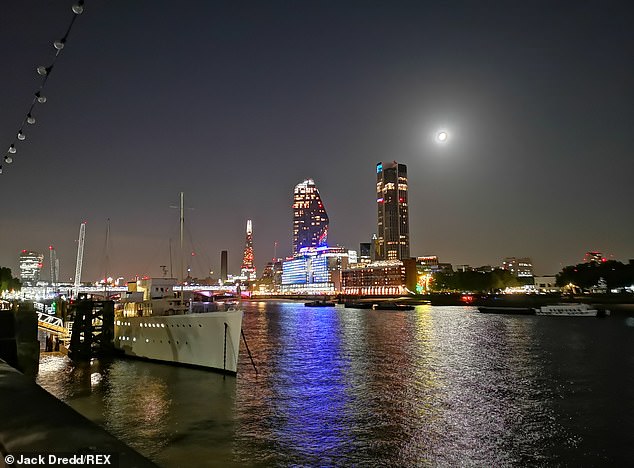 Skygazers will see a full ‘micromoon’ Friday night. It will appear like a dot in the night sky because the moon is at its farthest point from Earth. Pictured is a full micromoon in the sky over the River Thames in London in 2020.

The average distance between the moon and Earth is 238,855 miles, but our natural satellite can be 225,291 miles during its closest approach, known as perigee – the farthest is apogee.

Since the moon is at its furthest point in orbit, it will seem much smaller and less bright when it hangs in the night sky.

If you feel like January’s off to a slow start, you aren’t alone – and according to astrologers, things might not ‘get going’ until January 19 when the ‘chaos’ of Mercury in retrograde ends.

For comparison, supermoons are 14.5 percent wider and 25 percent brighter than the one set to be seen tonight.

There are no universal rules regarding how far away the Moon must be to qualify as a micromoon.

The micromoon, however, means the evening will be unusually dark, offering the perfect conditions for stargazing.

The name ‘wolf’ stems from how packs of wolves were heard howling outside of the villages amid the cold and deep snows of winter.

Along with dazzling in the night sky, a full moon is also known to impact human mood, sleep and appetite when it appears.

While the moon is full, everyone will experience less sleep, but women have a more dramatic drop in REM sleep – rapid eye movement sleep, during which we dream.

And there is a spike in REM sleep for men during a full moon.

The full moon can knock our appetites out of whack, too.

During deep sleep, we produce more of a hormone called leptin, which helps us to feel full and satisfied. Meanwhile, ghrelin, which has the opposite, hunger-inducing effect, goes down.

And then our moods are impacted by a full moon.

One biologist found in his research that the mood swings of his bipolar patients corresponded to the lunar calendar and thinks this could be down to tidal pulls acting on the human body.

When there are significant events in the lunar cycle, like a full moon, this might cause notable mood changes, making us more prone to snacking as we reach for a sugary treat to pick us up again.

Mike Hardman, Marketing Manager at Alliance Online, said in a statement: ‘Overall, there is still a lot of research left to be done on the relationship between humans and the moon, and the effect that it has on our appetite is no exception.

At the point in the moon’s orbit when it’s closest to the Earth, it appears 14 percent bigger than a micromoon, and vice versa

‘However, there are various studies to suggest that a full moon can disrupt sleep, which can make you feel peckish.

‘So, if you find yourself tossing and turning, and reaching for the snacks around this time of the month, the full moon might be to blame.

‘If you often get the urge to have a late-night snack around this time, try to avoid sugary foods or caffeine-containing treats like chocolate, as these can keep you awake even longer. Instead, go for snacks like nuts, berries, or whole wheat toast. These will fill you up without disrupting your sleep cycle.’

China could claim the moon as its own territory and BAN US astronauts from touching down, NASA boss warns

From meteor showers and solar eclipses to the crescent moon beside Saturn and Venus: The astronomical events you don’t want to miss in 2023

What is a micromoon and why does it look smaller?

A micro moon happens when a full moon coincides with apogee, when the moon is at the furthest point in its orbit from the Earth.

The moon orbits the Earth in an elliptical path. This is oval-shaped, meaning that one side of the path is closer to the Earth than the other.

The average distance between the Earth and the moon is 237,700 miles.

During some points of the year, the moon appears larger or smaller depending on its location in its elliptical path.

When a full moon occurs around apogee, the point at which the moon is furthest from Earth, it is called a micro moon.

And because the moon is further away from Earth, it appears 14 percent smaller and around 30 percent dimmer than the average moon.

However, a super moon is seen when a full moon occurs around perigee, which is when it is at its closest point to Earth.

As a result, the moon appears 30 percent brighter and 14 percent larger, creating a mesmerizing lunar disk in the sky.