‘A disaster waiting to happen’: Experts say tourist trips to White Island volcano were ‘too dangerous’ and warn the deadly eruption could trigger follow-up landslides and tsunamis

The devastating volcanic eruption on New Zealand’s White Island has already claimed at least five lives and dozens more could be at risk from subsequent landslides, eruptions and tsunamis, scientists warn.

A leading scientist said the eruption was ‘a disaster waiting to happen’ and called the active island ‘too dangerous’ for such tourist trips.

Unstable rock, which formed immediately after the eruption, could be washed down the mountain in a landslide, if the ash belching out from Volcano Whakaari triggers a downpour of rain.

Tonnes of moving rock heading towards the ocean could end in further catastrophe if it plunges into the water and triggers a tsunami.

Scientists also say there is a ‘high chance’ that the island will to try to ‘re-equilibrate’ via a series of smaller volcanic eruptions.

Dozens of tourists visiting the volcanically active island 30 miles (48km) off the coast of mainland New Zealand are unaccounted for or injured, according to rescue workers.

Authorities have already confirmed that approximately 100 people were on the island at the time of the eruption. 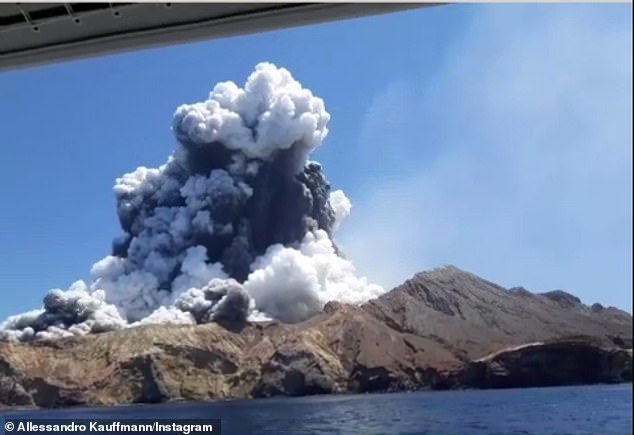 The devastating volcanic eruption on New Zealand’s White Island (pictured) has already claimed at least five lives. Scientists also say there is a ‘high chance’ for the island to try and ‘re-equilibrate’ via a series of smaller volcanic eruptions 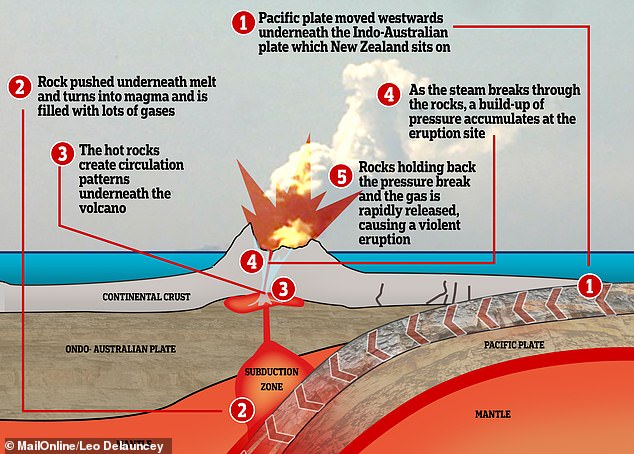 The violent volcanic eruption on New Zealand’s white Island was caused because ocean crust is being subducted (pictured, the series of events leading to the spontaneous eruption).  This constant movement means sudden explosions can occur at any moment

WHAT WAS THE 1914 DISASTER OF WHITE ISLAND?

In the late 1800’s a sulphur mine was established on the island.

The workers lived in a small settlement.

The settlement was decimated in 1914 when an avalanche of rock destroyed the mining buildings.

There was significant loss of life and the practice of mining sulphurous rocks on the island was stopped.

Emeritus Professor Ray Cas, from Monash University, says White Island ‘has been a disaster waiting to happen for many years’.

‘I have always felt that it was too dangerous to allow the daily tour groups that visit the uninhabited island volcano by boat and helicopter,’ he said.

In 1914, a small mining community on the island was wiped out after falling rocks weakened by the island’s volcanic activity swept through the village.

It has been uninhabited now for more than a century, but is a hotspot for tourists hoping to get close to an active volcano.

Large volcanic events such as the White Island eruption can often cause subsequent disasters.

The eruption of Krakatoa in 1883 caused enormous tsunamis, as did an eruption of Mount Teide on Tenerife in the Canary Islands.

Chris Elders, professor of Geology at Curtin University’s School of Earth and Planetary Sciences, told MailOnline that a similar event could occur in New Zealand, and compound the difficulty rescue workers are having in the search for missing survivors.

‘It’s still not safe for rescue workers to land on the island and this may be a combination of the ash in the atmosphere that would affect any helicopters, because hot volcanic activity could continue for some time,’ he said.

‘Also, when you get an eruption like this, the ash deposits very quickly and creates rocks which are extremely unstable.

‘Any rainfall, which can be triggered by the ash sent into the atmosphere, could cause a landslide if the unstable rocks come loose.’

A landslide poses potentially fatal consequences to both rescue workers and the trapped tourists still on the island.

As in the case of Krakatoa and Tenerife, a tsunami-caused by tumbling rocks into the ocean could be disastrous.

‘If rock from the mountain slides down into the sea, when that happens it displaces the proportionate amount of water and causes a wave,’ Professor Elders added.

White Island, also known as Volcano Whakaari, is known as a stratovolcano – similar to Mt St Helens and many other classic cone-shaped volcanoes.

The violent volcanic eruption on New Zealand’s white Island was caused because ocean crust is being subducted – or pushed under another part of the Earth’s crust.

This constant movement means sudden explosions can occur at any moment.

As the Pacific Plate submerges further into the Earth’s core, the rock melts and forms magma.

Professor Shane Cronin, a volcanologist at the University of Auckland, said: ‘Magma is close to the surface, and the heat and gases from this heat the surface and ground waters to form vigorous hydrothermal systems.

‘We know hydrothermal and so-called ‘phreatic’ eruptions can occur suddenly and with little or no warning because they are driven by the expansion of super-heated water into steam.’

As pressure builds up in the volcano, eventually the rocks withstanding the forces burst, and the gases are released violently, causing an eruption which sent ash more that 10,000 ft (4,000m) into the atmosphere.

‘The eruptions are short-lived, but once one occurs, there are high chances for further, generally smaller ones as the system re-equilibrates,’ Professor Cronin said.

New Zealand is home to a preponderance of volcanoes, spanning from the North Island to the South Island and beyond.

The volcano is one of many in the ‘Ring of Fire’ and forms part of a chain from Ruapehu in the North Island, through numerous submarine volcanoes all the way to the Solomon Islands and the Tonga Chain. 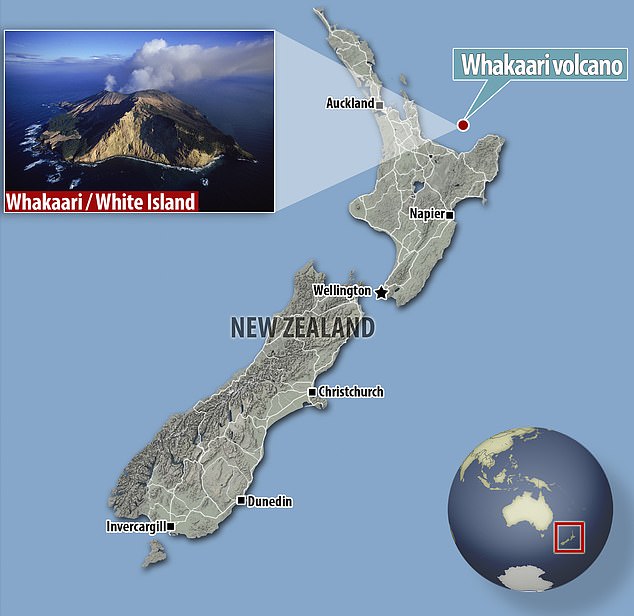 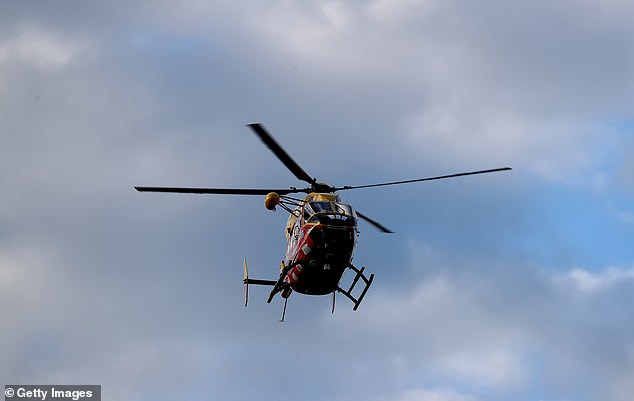 Pictured, a rescue helicopter is pictured arriving at the Whakatane Airport. At least five people have died, several are injured and many more are missing 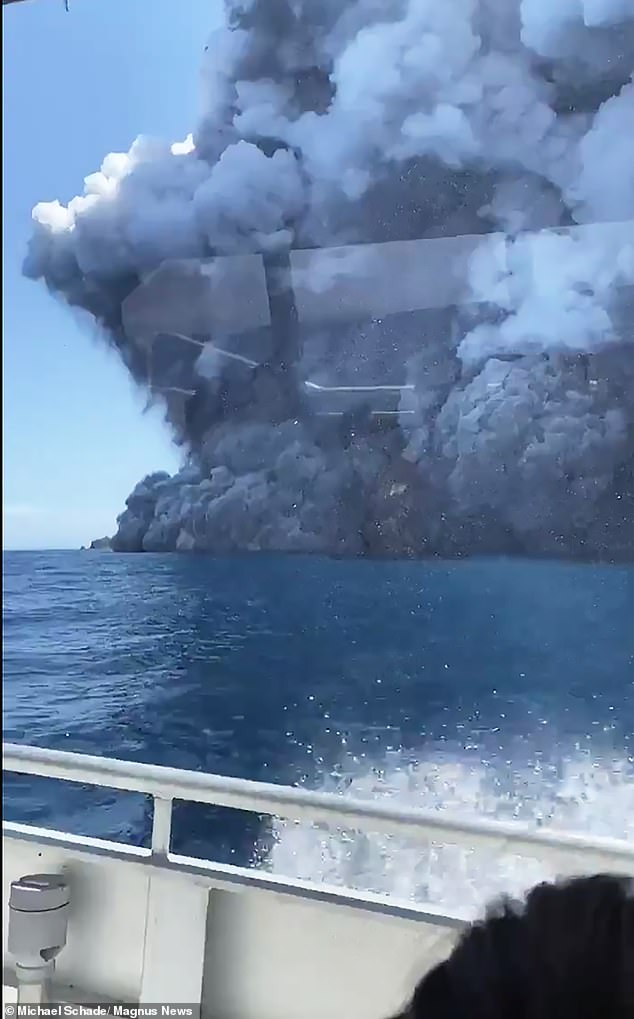 Pictures taken by tourists moments after the eruption on White Island pictured) capture the enormous ash cloud sent thousands of feet into the air. Image taken by Micahel Schade from a boat,whohad left the island with his family just 20 minutes before the eruption

Warnings ignored: How persistent tourists travelled to the active volcano against expert advice

Tourists have been travelling to White Island for years despite warnings from scientists that it could erupt at any time.

Between 2011 and 2016 the volcano to the north of New Zealand’s north island – which erupted on Monday – had a period of increased activity but still boatloads of tourists arrived.

Volcanologists at the time refused to step foot on the island because it was too dangerous and warned tourists not to go – but still the boats kept landing. 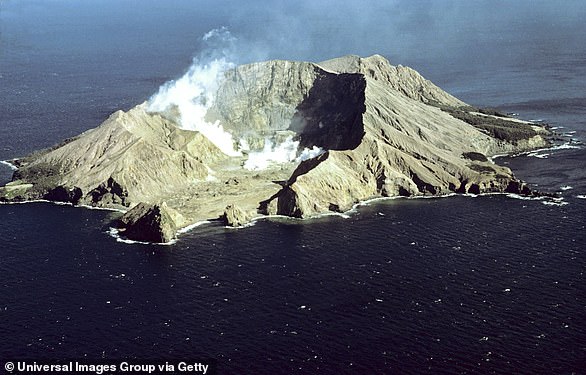 An aerial view of the volcano, which is currently the most active in New Zealand and erupted in 2016 and 2012 before today

In recent weeks the volcano has been going through another period of activity but tourism was not stopped.

Last month monitoring outfit GNS Science raised the alert level for the volcano to level two because of increase activity.

‘Hazards on the island are now greater than during the past few weeks.

‘The patterns of signals are similar to those through the 2011 – 2016 period and suggest that Whakaari/White Island may be entering a period where eruptive activity is more likely than normal.’

The archipelago nation sits on the boundary between two major tectonic plates — called the Kermadec-Tonga arc — which leaves it vulnerable to natural disasters such as earthquakes, volcanoes and tsunamis.

Professor Ross Dowling, an Honorary Professor of Tourism in the School of Business and Law at Edith Cowan University, said: ‘The number of tourists visiting active volcanoes is increasing globally as part of an increase in both geological tourism and adventure tourism.

‘Part of the attraction is to visit an unpredictable natural environment and for most tourists they assume that they will be able to visit such dangerous sites in relative safety.

‘However, despite the increased science behind predicting volcanic eruptions, the science is not infallible and ‘active’ volcanos may erupt at any time.

‘Therefore volcanic hazard management guidelines need to be easily understood by the public so that visitors can weigh up their their risks in relation to visiting such sites.

‘One such strategy is to simply allow visitors to view active volcanoes from a distance and not allow them on to any volcano deemed still in its active phase.

‘In this way risks to the public will be reduced whilst still allowing adventurous visitors a chance to see and experience those elements of the landscape which are active and dramatic.’

HOW CAN RESEARCHERS PREDICT VOLCANIC ERUPTIONS?

According to Eric Dunham, an associate professor of Stanford University’s School of Earth, energy and Environmental Sciences, ‘Volcanoes are complicated and there is currently no universally applicable means of predicting eruption. In all likelihood, there never will be.’

However, there are indicators of increased volcanic activity, which researchers can use to help predict volcanic eruptions.

Researchers can track indicators such as: