What do you call a black hole? Anything you want, the old joke goes, as long as you don’t call it late for dinner. Black holes, after all, are nothing but hungry.

But what do you call a collection of black holes? The question has taken on an urgency among astronomers inspired by the recent news of dozens of black holes buzzing around the center of a nearby cluster of stars.

In the last few years, instruments like the LIGO and Virgo gravitational-wave detectors have recorded space-time vibrations from the collisions of black holes, making it clear beyond doubt that these monstrous concentrations of nothingness not only exist but are ubiquitous. Astronomers anticipate spotting a great number of these Einsteinian creatures when the next generation of gravitational-wave antennas are deployed. What will they call them?

There are gaggles of geese, pods of whales and murders of crows. What term would do justice to the special nature of black holes? A mass? A colander? A scream?

Jocelyn Kelly Holley-Bockelmann, an astrophysicist at Vanderbilt University, and colleagues are developing an international project called the Laser Interferometer Space Antenna, or LISA, that will be able to detect collisions between all sizes of black holes throughout the universe. She was trying to run a Zoom meeting of the group recently “when one of the members said his daughter was wondering what you call a collective of black holes — and then the meeting fell apart, with everyone trying to up one another,” she said in an email. “Each time I saw a suggestion, I had to stop and giggle like a loon, which egged us all on more.”

The question was crowdsourced on Twitter recently as part of what NASA has begun calling black hole week (April 12-16). Among the many candidates so far: A crush. A mosh pit. A silence. A speckle. A hive. An enigma. Or a favorite of mine for of its connection to my youth: an Albert Hall of black holes.

Tell us: What would you call a bunch of black holes?

The number of known black holes will only grow. LISA will be able to detect so-called primordial black holes, if there are any, left over from the early moments of the Big Bang, as well as more recent ones, presenting researchers with “basically a black hole smorgasbord,” Dr. Holly-Bockelmann said. The antenna won’t fly until 2034, she added, “so there is time to figure out the term if and when we need it!” The International Astronomical Union, which regulates cosmic nomenclature, has no rules on “collectives,” she added, so it is up to the people to decide. 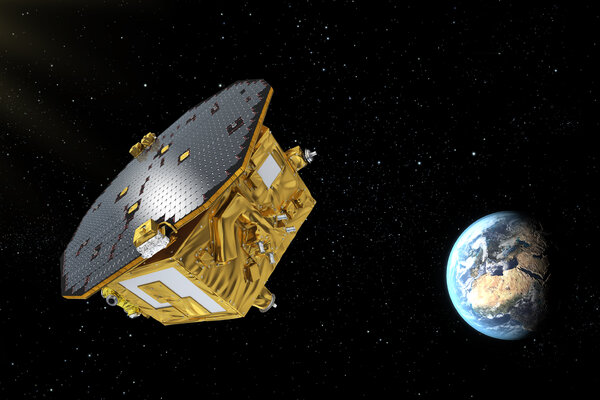 Dr. Holly-Bockelmann added, that among her personal preferences was “a ‘void’ of black holes.” My own candidate is a “disaster” of black holes, since the word disaster is rooted in the Latin “astro” — star — and, later, the Italian term for “ill-starred.”

The previous black hole week was in the fall of 2019, when NASA replayed some of the scarier-sounding cosmic news, involving black holes exploding, eating stars or preparing to consume their neighborhoods. Now, against the backdrop of a global pandemic, black holes offer a respite and reminder of how small and fleeting our own troubles are in the grandest scheme. Black holes have become the cat videos of astronomy.

So last week, NASA served up another smorgasbord of black hole news and public service announcements, like this animated video from NASA’s Goddard Space Flight Center.

You can’t tour a black hole, of course, but two years ago astronomers provided the next best thing: the first-ever image of one. The supermassive black hole — 6.5 billion suns worth of disappeared mass — sits at the center of the galaxy Messier 87.

The image was taken by a worldwide network of radio telescopes known as the Event Horizon Telescope in April of 2017. Last month, the Event Horizon team refined that image to show the surrounding vortex of magnetic fields that streams gas and energy across space at nearly the speed of light.

But there is more. While that first 2017 image was being taken, 19 other observatories in space and on the ground were collectively studying this jet of energy from M87. Their data has now been published along with a video of the jet as seen in different kinds of light and at different scales, from the most intimate dimensions of the black hole out to intergalactic space.

The results, astronomers said, would help clarify how black holes work their violent magic, further test the predictions of Einstein’s theory of general relativity and perhaps shed light on the origin of cosmic rays.

For its part, the Event Horizon team has just concluded a new series of observations of the black holes — in M87, at the center of our own galaxy and elsewhere — said Shep Doeleman, of the Harvard-Smithsonian Center for Astrophysics and founding director of the telescope collective.

“Each day we gather at 2 p.m. E.D.T. to review all the weather and readiness at the sites, then make the call,” Dr. Doeleman said in an email. “Sometimes it’s a piece of cake: good weather, everyone’s ready. Or, just as clear, weather at key sites is awful or there is a major technical issue to be run down. Some of the time it’s pure agony.”

If you don’t have a rocket or a telescope, there’s plenty new to read about black holes. “Hawking Hawking: The Selling of a Scientific Celebrity,” by Charles Seife, is an unvarnished look at the cosmologist and black-hole expert Stephen Hawking, who died in 2018. The book, rich in reporting about Dr. Hawking’s breakthroughs and his life (and written in reverse chronological order), seeks to separate the man and his science from the Einstein-like aura of sagacity that he let envelope his public persona.

And “Black Hole Survival Guide,” by Janna Levin, an astrophysicist at Barnard College of Columbia University, and illustrated by artist Lia Halloran, is a pocket-size tone poem to these cosmic curiosities.

“Black holes are nothing,” the opening line reads. At the end, Dr. Levin contemplates the possibility of Earth and whatever remains on it eventually falling into the black hole at the center of the Milky Way.

“That is where our data, our scraps of quantum information, may end up,” she writes. “Everything will wash down the central vortex, flashing spectacularly bright, the last desperate blasts of concentrated light in the cosmos, until all vanishes in a darkening silent storm in space-time.”

And we might as well call the whole universe a graveyard of black holes. A smorgasbord of screams — just another black hole week.