Ninety-nine million years ago, a 55-foot dinosaur stalked the river deltas of North Africa. A sail on its back towered over the water as its crocodile-like jaws and curved claws made short work of car-size fish.

This was Spinosaurus, discovered in 1915. Paleontologists have since debated how this creature lived. Did it prowl through currents in pursuit of prey, as recent research has suggested, or seek its quarry in the shallows more like an enormous wading bird? New evidence for this second explanation was published Tuesday in Palaeontologia Electronica, challenging a hypothesis that scientists had found a dinosaur that lived a primarily aquatic lifestyle.

The idea that spinosaurus spent most of its time underwater has been driven in recent years by the announcement in 2014 by Nizar Ibrahim, a paleontologist at the University of Portsmouth in England, and colleagues of their discovery of a partial skeleton of the predator. They argued it had spent much of its time underwater, the first dinosaur known to do so. That idea was bolstered last year when Dr. Ibrahim’s team announced the discovery of a finned, eel-like spinosaurus tail.

The case for a more aquatic spinosaurus rests on a few genuinely bizarre features, Dr. Ibrahim said. Unlike most predatory dinosaurs — including some relatives such as the slender-snouted baryonyx — spinosaurus had densely mineralized bones, unusually short hind limbs and a tail configuration that allowed for sinuous, sculling motions.

“Really, every part of the body we looked at has ‘water-loving’ written all over it,” Dr. Ibrahim said.

Other paleontologists raised doubts about this hypothesis.

“Real aquatic pursuit predation is a very challenging lifestyle,” said Thomas Holtz Jr., a predatory dinosaur specialist at the University of Maryland and a co-author of the new paper. Aquatic predators like otters, sea lions or sharks have compact, smooth bodies that reduce underwater drag. 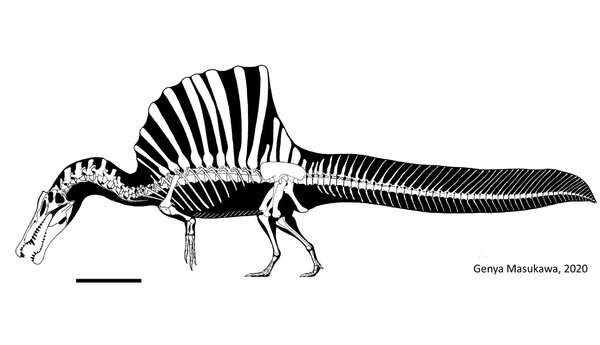 According to David Hone, a paleontologist at Queen Mary University of London and a co-author with Dr. Holtz, earlier research by Dr. Ibrahim’s team had shown that spinosaurus had a relatively small number of tail muscles, Dr. Hone said, even fewer than crocodiles, which also tend to have trouble with drag and aren’t particularly effective at pursuing prey underwater. With its tall sail and bulky limbs, spinosaurus would have produced tremendous drag in anything but the deepest water, making swift subaquatic chases extremely difficult.

Instead, the team points to a different set of traits. Spinosaurus had nostrils back on its long snout, like a heron, Dr. Hone said, rather than atop its face, like a crocodile. It had broad feet, like a stork, as well as a head and neck adapted for a strong downward strike. Isotopic evidence from spinosaurus teeth also suggests that at least some individuals were eating fully terrestrial prey, perhaps including other dinosaurs.

Without further spinosaurus remains, it is difficult to tell what differences might have existed between animals of different ages or sexes, Dr. Holtz said. Several species of dinosaur changed drastically as they grew: Young tyrannosaurs were swift pursuit predators, while adults were lumbering behemoths. More fossils would help determine “if the tail sails were mostly for display rather than locomotion (for instance, if males had tall sails and females more normal sails), or if different growth stages had more aquatic adaptations than others,” he said in an email.

But in light of available anatomical evidence, Dr. Hone said, spinosaurus seems better suited to stalking along the shoreline, wading out like a heron to snatch prey or swimming at the surface and dipping down to ambush fish below.

“The idea that spinosaurs hung out by the water isn’t controversial,” he said. “We’re not saying it didn’t swim, or even swim relatively well. But the idea that this is an otter-like animal is probably going way too far.”

Dr. Ibrahim said that while he welcomes the debate, he and his team stand by their earlier findings that spinosaurus was better adapted to hunting underwater than any other known dinosaur, and probably targeted large, slow-moving fish as well as terrestrial prey.

“There is really not anything in this paper that we have not considered before — which is not too surprising, considering that it does not contribute any novel data, such as new fossil remains or quantitative analyses and experiments,” he said.

Some paleontologists say aspects of Dr. Ibrahim’s earlier findings can be integrated into the hypothesis that spinosauruses were waders.

“The heron model at this point in time is the simplest explanation that fits the available data, and in our science, that’s often the best route to follow,” said Serjoscha Evers, a spinosaur specialist at the University of Fribourg in Switzerland who reviewed the paper.