How elephant FOOTPRINTS offer a safe haven for FROGS: The amphibians lay their spawn in the giant creatures’ muddy imprints

Asian elephants act as ‘ecosystem engineers’ by leaving muddy footprints that are used as nursery pools by a native species of frog, experts say.

The rain-filled imprints fade over time but, for at least a year, can offer safe haven for tadpoles and frogs – particularly in the dry season.

Experts from the Wildlife Conservation Society, Myanmar, studied these pools of water in the northwestern part of the country’s Tamanthi Wildlife Sanctuary.

They discovered 20 water-filled elephant tracks containing frogs’ eggs and larva, although no adults were present. 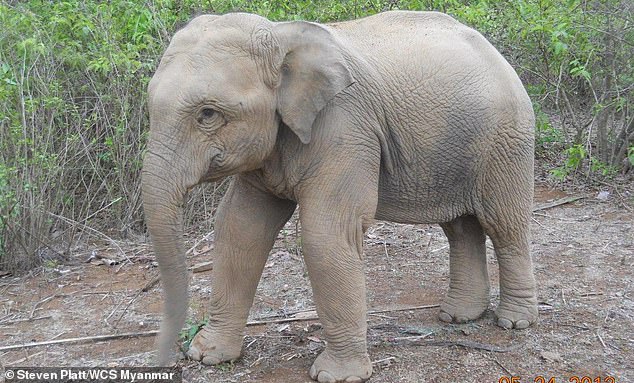 Asian elephants (pictured) act as ‘ecosystem engineers’ by leaving muddy footprints that are used as nursery pools by a native species of frog, experts say 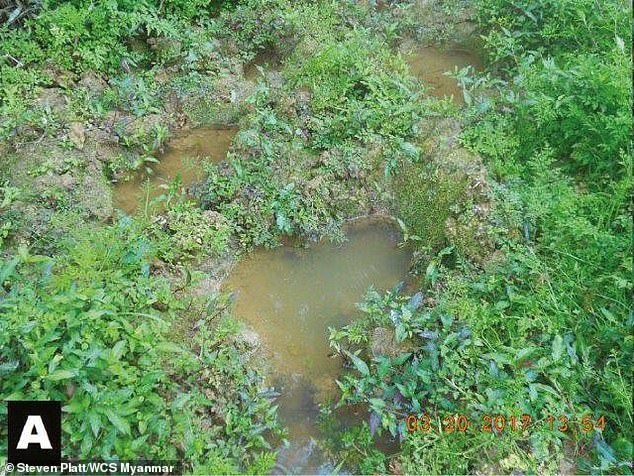 The rain-filled imprints (pictured) fade over time but, for at least a year, can offer safe haven for tadpoles and frogs – particularly in the dry season

Elephants trundling through the mud around the seasonal wetlands leave deep tracks, some of which fill with water.

This means their tracks are better able to retain water during the lengthy dry season  – running October through May – when most wetlands contain no water.

Frogs take advantage of this, laying their eggs in the miniature ponds, where tadpoles are protected and can develop into adults.

‘That said, I think our study and several others indicate that Asian elephants play an important role as ecosystem engineers.

‘Not only do elephants modify vegetation — knocking down trees, removing bamboo, dispersing seeds, etc. — but they also affect the ecosystem in ways that might not be readily obvious.

‘That includes creating temporary ponds and dung piles used as food and cover by invertebrates and small vertebrates.’ 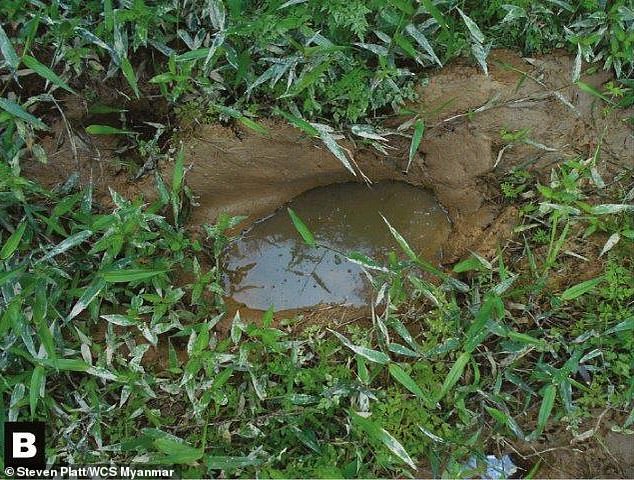 Experts discovered 20 water-filled elephant tracks containing frogs’ eggs and larva, although no adults were present. Pictured: One of the rain-filled footprints with frogspawn floating on its surface 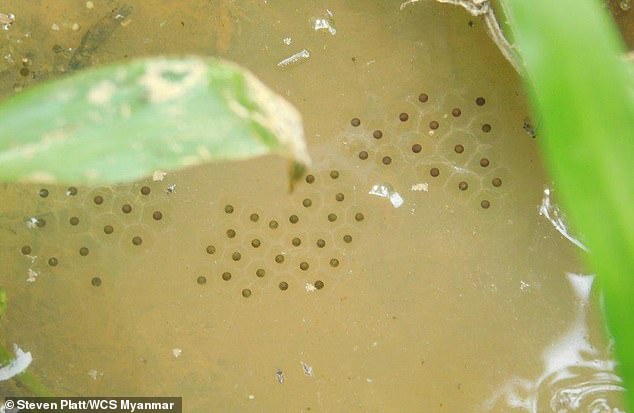 Elephant tracks are better able to retain water during the lengthy dry season – running October through May – when most wetlands contain no water. Pictured: A closeup of one of the footprints with frogspawn floating on its surface

First, these tracks provide critical nesting sites that are available at a time of the year when most other small pools are dry.

Second, tracks are free of predators such as small fish, that might consume eggs and tadpoles.

And fourth, water-filled tracks could function as ‘stepping stones’ connecting different breeding populations of frogs across the landscape.

The full findings of the study were published in the journal Mammalia.

WHAT DO WE KNOW ABOUT ASIAN ELEPHANTS?

They are smaller than African elephants and have proportionally smaller ears, which they keep in constant motion in order to cool themselves.

They also have a single ‘finger’ on the upper lip of their trunks as opposed to African elephants, which have a second one on the lower tip.

Their skin ranges from dark grey to brown, with patches of pink on the forehead, the ears, the base of the trunk and the chest.

A significant number of male Asian elephants are tuskless. The percentage of males with ivory varies from just five per cent in Sri Lanka to around 90 per cent in southern India – possibly reflecting the intensity of past ivory hunting.

Female elephants are more social than males. They form herds of related females that are led by the oldest female, the ‘matriarch’.

When habitat conditions are favourable, female elephants may give birth to a calf every two-and-a-half to four years.

After several months, the calf begins to eat grass and foliage. However, it stays under the supervision of its mother for several years, starting to make its first independent moves when it is around 4 years old.

Both males and females may become sexually mature as early as nine, but males do not usually start sexual activity until they are 14 or 15.

Even then they are not capable of the social dominance that is usually necessary for successful reproductive activity, especially as most elephants only reach their full size at about 17 years of age.