Last week, NASA stunned planetary scientists when it announced that it was going to send not one but two different spacecraft to Venus by the end of the decade. On Thursday, the European Space Agency declared that it was launching its own mission there too: EnVision, an orbiter that would investigate even more of the planet’s mysteries.

Until this month, Venus had been somewhat lonely. NASA’s last mission to the second planet was Magellan, which burned up in its skies in 1994. Europe’s last foray there was the Venus Express spacecraft, which orbited the planet and studied it from 2006 until 2014. Today, Japan’s climate-observing Akatsuki is the only emissary from Earth in orbit.

With Europe’s EnVision spacecraft added to NASA’s decision to revisit Venus with the VERITAS and DAVINCI+ missions, it’s safe to say that the next decade will belong to Venus, and some in the Venusian science community have been rendered speechless.

Upon hearing the news of the EnVision announcement, Martha Gilmore, a planetary geologist at Wesleyan University, who is part of both the DAVINCI+ and VERITAS teams, said: “I don’t even know what to do, my mind can’t,” she paused and finished, “I’m in a weird state.”

“This is the best possible news,” said Paul Byrne, a planetary scientist at North Carolina State University. “You couldn’t have asked for a better situation.”

All three missions have different objectives and scientific instruments. But each will contribute to addressing the same overarching question. “Was Venus like Earth — was it habitable?” said Colin Wilson, a planetary scientist at the University of Oxford and a deputy lead scientist on EnVision.

Today, Venus is a post-apocalyptic wasteland: Its asphyxiating carbon dioxide atmosphere mingles with highly corrosive sulfuric acid clouds; its crushing surface pressures are equivalent to being a mile underwater; and its surface temperatures hit 900 degrees Fahrenheit, enough to melt lead. Curiously though, the presence of a rarer, heavier form of water in its atmosphere indicates that there once was a lot more normal water on Venus. 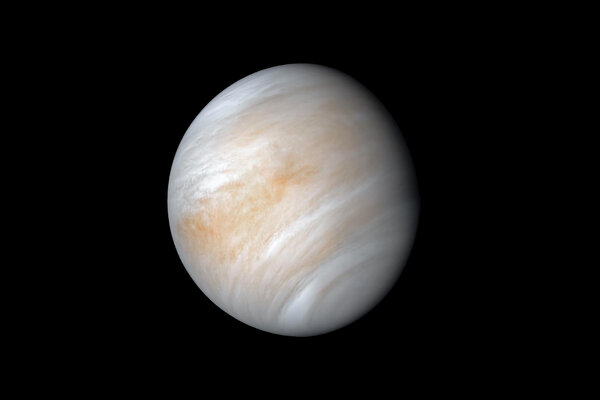 If that water existed not as steam, but as lakes, rivers, seas and oceans, it would have been the solar system’s second blue marble. Today, Earth remains the sole waterlogged oasis — but why? How did Earth escape Venus’s fate?

“Some of those answers lie on Earth, but some of them lie on Venus,” Dr. Wilson said.

EnVision will study those mysteries with a suite of advanced scientific instruments. Its radar systems will peer through Venus’s thick atmosphere, mapping both the surface and the rocky layers up to 3,300 feet below the surface. An array of spectrometers seeing in ultraviolet and infrared light will analyze the atmosphere’s chemical composition, and differentiate between types of rock on the ground. A radio science experiment will be able to use slight changes in the planet’s gravity to parse the layer cake structure of Venus’s geologic guts.

All of these instruments will help answer another major query. “Is Venus alive or dead, geologically?” Dr. Wilson said. Venus, a world dominated by volcanoes and eruptive graffiti, clearly had a geologically hyperactive past. Although most scientists suspect that Venus is still erupting today, the thick cloud cover has prevented confirmation of that idea, just as it had prevented the search for the telltale earth-shattering movement of faults.

By conducting surgical scientific surveys on specific parts of the planet, EnVision will be able to comprehensively clear away this uncertainty. It can detect the thermal signatures of active volcanoes, sniff out the gaseous plumes from any erupting volcanoes and look for evidence of ongoing tectonic to-and-froing.

The spacecraft will also be able to peer into Venus’s past, looking for the scar tissue left behind by ancient plate tectonics and the relics of its epic, primordial volcanic activity — the sort that some suspect may have triggered the runaway greenhouse effect that dried up the planet. It will also investigate the tesserae, curious plateaus that rise above plains of younger lava. Some think these may turn out to be deformed layers of continent-like rock. If so, that means they formed in the presence of liquid water — yet more evidence that Venus was once an ocean world.

As capable as these three missions are, they won’t solve all of Venus’s mysteries, like whether phosphine, a gas potentially present in the planet’s clouds, is being manufactured by microbial life.

But the hope is that this is the beginning of a second Venusian renaissance. “It’s setting the stage for sustained Venus exploration,” Dr. Byrne said, and only a prolonged series of missions to Venus — from more orbiters and probes to atmospheric balloons and landers — will let us discover why it became Earth’s evil twin.