Vast halo of dark matter around a dwarf galaxy 163,000 light years from Earth is said to be five times larger than previously estimated

The dwarf galaxy known as Tuscana II is now believed to have a vast halo of dark matter that is much larger than scientists previously estimated.

MIT astrophysicists detected stars on the edge of Tuscana II, which sits 163,000 light years from Earth, in a configuration that is far from the center.

Because the stars are trapped in the tiny galaxy’s gravitational pull, scientists speculate dark matter is what’s keeping them there.

Dark matter is a hypothetical type of matter that is thought to make up more than 85 percent of the universe, and every galaxy is thought to be held together by a local concentration, or halo, of dark matter.

This is the first sign that Tuscana II, which is one of the first galaxies in the universe, hosts an extended dark matter halo – and experts speculated it is three to five times more massive than believed. 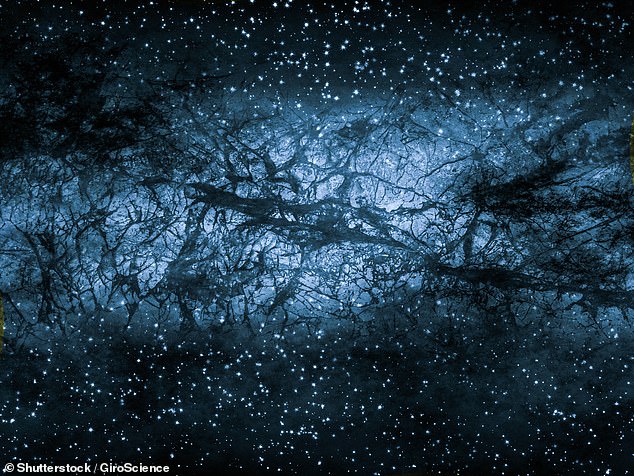 The idea of dark matter, originally known as ‘missing matter,’ was formulated in 1933, following the discovery that the mass of all stars in the Coma cluster of the galaxies used about one percent of the mass needed to keep galaxies from escaping the cluster’s gravitational pull.

The discovery sparked a theory among the scientific community that the anomalies were caused by masses of invisible ‘dark matter,’ located in and around galaxies.

Many experts suggest about 85 percent of all the matter in the universe is dark matter – but for such a great amount, it has never been seen nor detected. 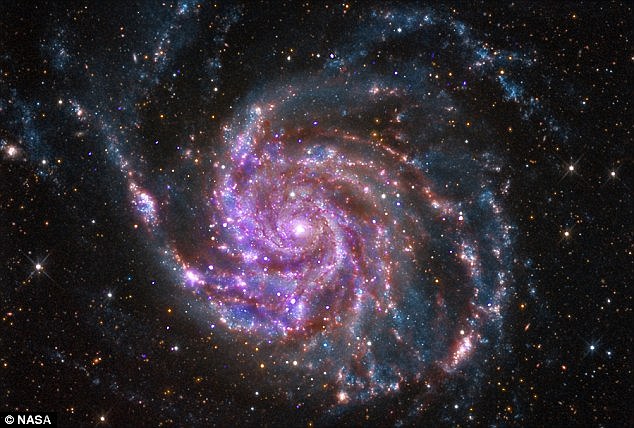 MIT astrophysicists detect stars on the edge of Tuscana II, which sits 163,000 light years from Earth, in a configuration that is far from the center. Because the stars are trapped in the tiny galaxy’s gravitational pull, scientists speculate dark matter is what’s keeping them there (artist impression of a distant galaxy)

The recent discovery by MIT suggests that the very first galaxies may be home to massive amounts of dark matter.

MIT graduate student Anirudh Chiti said: ‘Tucana II has a lot more mass than we thought, in order to bound these stars that are so far away.’

‘This means that other relic first galaxies probably have these kinds of extended halos too.’

Along with the halo of dark matter, the observation includes evidence of such a stellar imbalance in an ultrafaint dwarf galaxy.

The unique configuration suggests that the ancient galaxy may have been the product of one of the first mergers in the universe, between two infant galaxies—one slightly less primitive than the other.

Anna Frebel, the Silverman Family Career Development Associate Professor of Physics at MIT, said: ‘We may be seeing the first signature of galactic cannibalism.’

‘One galaxy may have eaten one of its slightly smaller, more primitive neighbors, which then spilled all its stars into the outskirts.’

Because the stars are located so far the center of Tuscana II, the team can only come to the conclusion that dark matter is keeping them in the galaxy’s gravitational pull.

‘Without dark matter, galaxies would just fly apart,’ Chiti. says. ‘[Dark matter] is a crucial ingredient in making a galaxy and holding it together.’

WHAT IS DARK MATTER?

Dark matter is a hypothetical substance said to make up roughly 27 per cent of the universe.