Is this the ultimate hangover cure? 8p off-the-shelf supplement usually given to asthmatics is found to relieve the nasty side effects of drinking alcohol – but it only works in women

Some of the popular hangover cures include herbal teas, fizzy drinks or even a massive Subway sandwich.

Now, researchers say a cheap pill that’s usually given to strengthen the immune system and reduce mucus in people with asthma or cystic fibrosis may be a successful option – but only for women.

In experiments, the academics found N-acetylcysteine (NAC) tablets reduced severity of hangovers for women, but not for men, after a heavy night of beer-drinking – but they can’t explain this ‘gender specific susceptibility’.

However, the few ‘minor’ side effects to NAC include ‘possible allergic reaction, heartburn and foul smelling bowel movements’, the experts say. 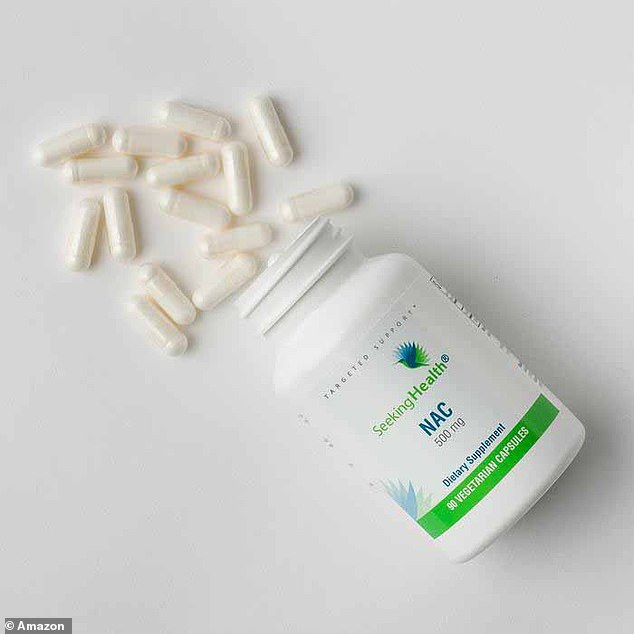 On Amazon, 120 600mg NEC capsules can be purchased for less than £10 – equating to only around 8p per tablet

N-Acetylcysteine (NAC) is a protein that contains the amino acid L-cysteine.

It also contains antioxidants that strengthen the immune system and prevent cell damage.

Side effects many include nausea, vomiting and diarrhea.

In the UK, the supplement is available at Holland & Barrett, while 30 600mg capsules can be purchased in the US from Walgreens, Walmart and CVS for as little as $4.79.

The US also has a generic version of NAC available as a cold and flu remedy to loosen the build up of mucus.

The research has been conducted by four experts at St. Luke’s University Health Network in Fountain Hill, Pennsylvania.

‘Hangovers are a nationwide problem manifesting in an array of negative outcomes affecting society,’ they say in their paper.

‘Studies related to clinically effective hangover treatments are limited despite the understanding that alleviation of hangover symptoms could have favourable effects on individuals with positive repercussions for society.

‘The effect of this study could have profound significance as it could lead to improved quality of life for the individual as well as societal improvement if academic and work-related productivity can be improved.’

NAC has been used to break down mucus and improve lung function for asthmatics, but it’s also used to treat paracetamol poisoning and chest pain and to combat allergic reactions to an epilepsy drug.

Because it’s commercially available over-the-counter to take at home, it has the potential to prevent hangover symptoms without ‘requiring the financial burden of higher acuity medical care’, the study authors say.

Although the researchers can’t identify reasons for the ‘gender specific susceptibility’ to the benefits of NAC, they were able to pinpoint NAC’s effects when it comes to alcohol consumption generally.

‘When excessive amounts of ethanol are consumed, the liver is unable to effectively complete this process,’ the team say.

‘As glutathione stores diminish, the patient must wait for the liver to make more glutathione to rid the body of the remaining acetaldehyde – a process that can take eight to 24 hours.

‘Since [NAC] is a precursor to L-glutathione, it has the potential to decrease oxidative stress on the liver during ethanol degradation as a glutathione donor.’

For the study, the team recruited 49 healthy volunteers over the age of 21 – 31 men and 18 women – with no issues related to alcohol.

Participants met on two separate occasions at which time they were given either NAC or placebo capsules. 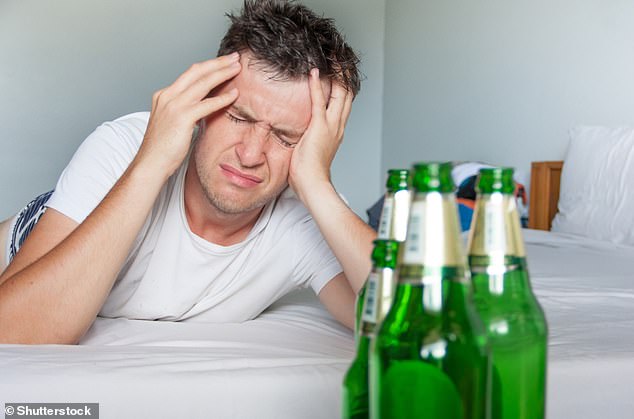 Men might have to keep on searching for a hangover cure that actually works, the study suggests (stock image)

– Sensitive to light and sound than usual

Each participant was provided the same type of beer – around 330ml of 5.2% ABV Belgian-style wheat ale.

They consumed one beer at a time until they reached a breath alcohol content (BrAC) of 0.1 g/210L measured with a hospital breathalyzer.

Each person’s dose of NAC was determined by the amount of alcohol consumed to reach this level – one capsule for those who drank one to three beers, two for those who had four to six beers and three for those given seven or more beers.

After taking the NAC capsules, the participants were driven home. The next morning they rated how bad their hangovers were, from ‘Feel like I did not drink’ to ‘So hungover I might die’.

They also filled out a Hangover Symptom Scale (HSS) questionnaire to gauge specific symptoms, such as headache, nausea, vomiting, trembling, feeling weak and having difficulty concentrating.

Researchers then compared the participant’s hangover symptom severity when using NAC compared to the placebo.

Overall, female participants had improved hangover symptoms after NAC use, especially for nausea and feelings of weakness.

‘The exact mechanism or reason for this difference is unknown,’ the researchers say.

However, there was no significant difference found regarding the specific hangover symptoms when comparing NEC and placebo.

The team conclude that taking NAC for hangovers at low doses – 600 to 1800 mg – is safe and ‘well tolerated by most individuals’.

Participants in the study did not report any serious adverse side effects of NAC use like nausea and vomiting, ‘malodorous stool’ or mild allergic reaction.

There were ‘very few mild side effects’ – mostly gastrointestinal symptoms – but these may have been the result of NAC or the alcohol.

The paper has been published in Scientific Reports.

WHAT ELSE IS N-ACETYLCYSTEINE USED FOR?

Aside from being approved in the US to loosen mucus in colds and flu, N-Acetylcysteine (NAC), which is considered a miracle supplement, has many other uses.

By binding to poisonous substances in the liver, NAC can be given intravenously to patients suffering from carbon monoxide poisoning or liver failure, as well as to detoxify heavy metals.

It can also be given as a preventative treatment in patients receiving aggressive drugs or X-rays.

NAC reduces ‘bad’ cholesterol levels and is therefore frequently recommended for patients at risk of suffering a heart attack or stroke.

By loosening mucus, NAC can also be inhaled in patients with cystic fibrosis, pneumonia or bronchitis.

Trials are underway investigating the supplement in everything from depression and schizophrenia to cannabis addiction, autism and even hangovers.