The supposed alien UFO was seen on March 6 this year over the German capital city. Popular UFO-hunter Scott C Waring said he came across the UFO photos on the Mutual UFO Network (MUFON). The conspiracy theorist, who runs the website UFO Sightings Daily, bizarrely said UFOs have been appearing over airports in great numbers in recent years. He now shared the unusual sighting in a bid to raise awareness of the issue.

The alleged UFO photos show a commercial jet flying low over the city of Berlin on a bright and sunny day.

The eyewitness described a “round object found in the sky” on the left side of the photo.

According to Mr Waring, the supposed UFO likely moved out of the aeroplane’s way once discovered. 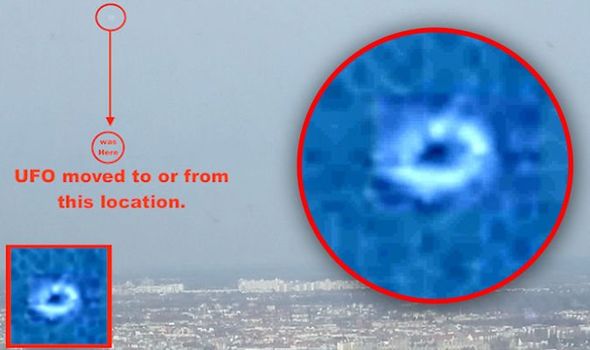 He said: “Here is an interesting report from MUFON today. A person took some photos and noticed a UFO in two of the photos.

“What looks like a ring UFO may be one solid craft with the top centre having a dark tinted dome window area on it.

“The UFO moves its position when it noticed the passenger jet approaching it.

“This makes me think there is a possibility of the UFO having shown up on radar.”

The UFO expert then speculated the UFO was hovering over Brandenburg Airport before it was forced to retreat.

A person took some photos and noticed a UFO

And in Mr Waring’s estimate, the UFO could have not been any bigger than 75ft (23m) across.

He also suggested the alien spacecraft employed some form of cloaking device to blend into the sky.

The conspiracist said: “When you compare the size of the jet, let’s say for comparison’s sake it’s a 747, which is 76.3m long. 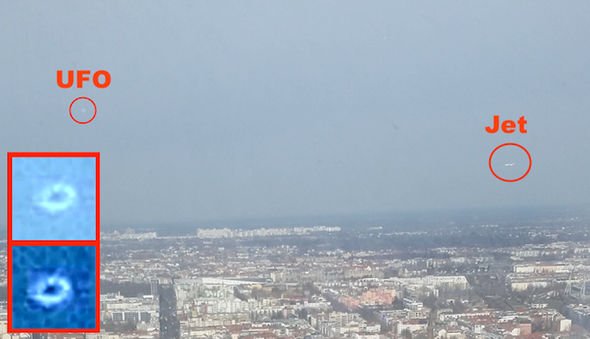 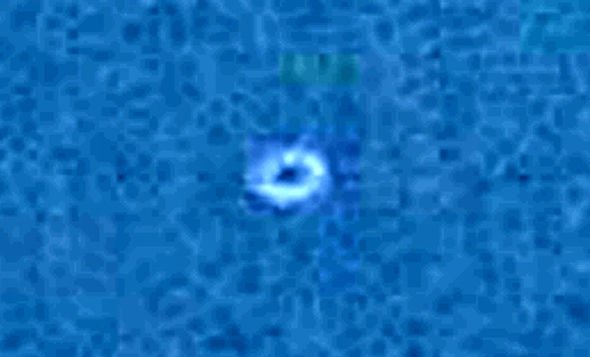 “Notice how the UFO takes on the colour of the sky behind it?

“The ship’s outer hull reflects the colours around it.”

However, what is more likely is Mr Waring fell for the effects of a peculiar psychological trick known as pareidolia.

Pareidolia causes people to see shapes, faces and patterns where they do not exist, often leading to claims of UFOs and aliens.

Dr Steven Novella explained the phenomenon in his book The Skeptics’ Guide to the Universe.

He wrote: “Your brain connects the dots. It’s amazing how few details are needed to suggest a face, and even an emotional expression, to our pattern-seeking brains.

“Even as little as a couple dots for eyes and some kind of line for a mouth is enough for our brains to see Elvis or the Pope.”