The supposed alien UFO was last seen near the Mexican volcano on March 27 this year. Eyewitness Carlos Clemente, who reported the UFO sighting for El Sol de Puebla, claimed the UFO appeared during a period of volcanic activity. The bizarre report was shared by UFOlogist Scott C Waring, who runs the website UFO Sightings Daily. In Mr Waring’s estimate, the UFO likely measured somewhere in the range of 131ft (40m) across.

The UFO-hunter said: “The mouth of the volcano is about 600m across.

“And the eyewitness saw many of these craft near the volcano, but only reported photos of one.

“I think that’s because the other UFOs were too far away or semi-cloaked – transparent – so they were difficult to record.” 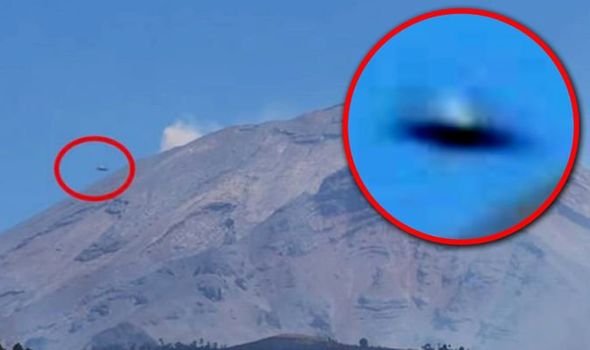 According to Mr Waring, Popocatepetl is known in the UFO enthusiast community for being a hotspot of alleged extraterrestrial activity.

The infamous volcano is often at the hear of many alien and UFO sightings and has had “hundreds of UFOs recorded around it over the last seven years”.

The volcano is located in central Mexico in the states of Puebla and Morelos.

Standing tall at 3.37 mils (5.42km), Popocatepetl is the second tallest peak in the country.

This UFO is about 40m in diameter

The volcano erupted on March 26, a day before the supposed UFO was photographed.

Mr Waring said: “Volcano Popocatepetl is one of the most active alien bases in the world, with UFO sightings recorded there on a weekly basis.

“The base exists about four to six kilometres below the ground where they made a large cavern area that is so huge that it has its own weather climate.” 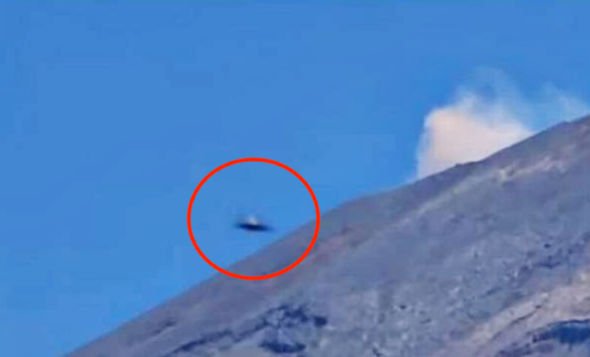 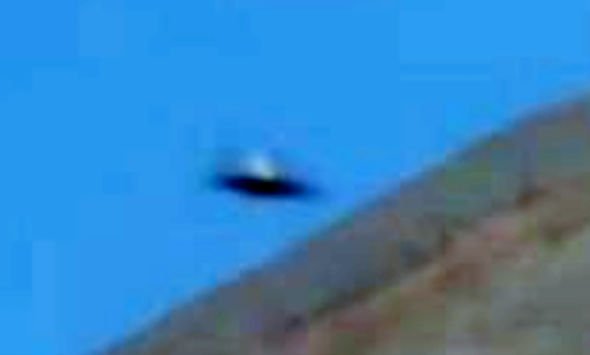 Based on the initial Mexican report of the UFO sighting, journalist Carlos Clemente was at the volcano to tour the sight of the eruption.

Mr Waring, who spends his days sharing UFO sightings from around the globe, claims to have found his first UFO as a child in 1975.

He explained on his website: “Had my first NASA photo discovery in the 1st grade, 1975, in Silicon Valley where I discovered the face at Cydonia, Mars in the school library.

“Stopped till high school, where I began searching for buildings in NASA moon photos and succeeded.