A couple enjoying a swim n Richmond, Kentucky, spotted a strange craft overhead which captured their attention. The object looks like a plane, but with certain parts of its make-up, such as the wing, missing. What made the sighting even more peculiar is that the UFO did not make a sound as it travelled overhead.

This has led conspiracy theorists to concluded the sighting was of extraterrestrial origin.

The original eyewitnesses of the craft wrote on the UFO investigation network MUFON: “Approx 8:40 pm my girlfriend (Myrna) and myself was swimming. We were about to get out of the pool when Myrna said ‘Look at the plane’.

“When I observed the craft it had no visible wings and a large maroon arc shape object at the nose of the craft.

“The craft was about the same size as a commercial aircraft, and was flying west to east. I assume the craft was between 12,000 and 15,000 ft because of the low level clouds in the area.

“The craft made no sound as it passed over our heads. We observed the craft until it went behind a low level cloud, but did not exit the other side of the cloud.” 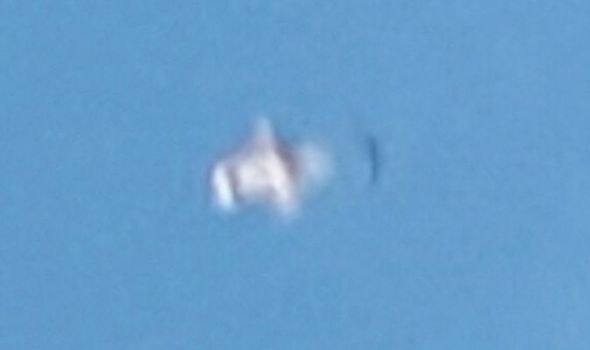 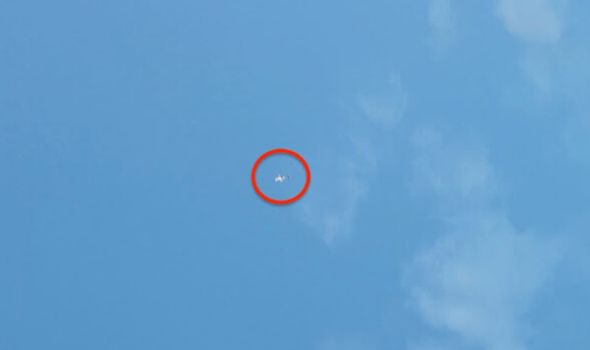 Mr Waring wrote on his blog ET Database: “The object has one wing visible and the other 90 percent invisible.

“It looks like the person caught sight of it at the moment it raised or lowered its cloaking shields. The Eyewitness says its the size of a commercial airliner.

“Now thats huge. But when something flies that high, most people never bother looking on hot sunny days because its too bright in the sky and hurts their eyes. 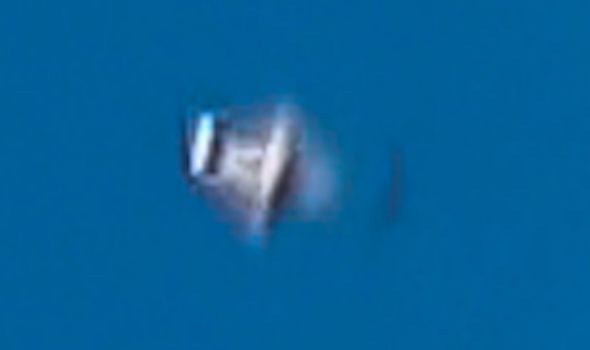 “Nice capture and any craft with a cloaking device is 100 percent alien.”

While the existence of aliens has never been confirmed, the US Department of Defense has recently acknowledged a video from a US Navy pilot’s radar footage of a mystery UFO with “glowing aura” and flying erratically.

The video first circulated back in 2017, but it took the DoD three years to acknowledge the video’s existence. 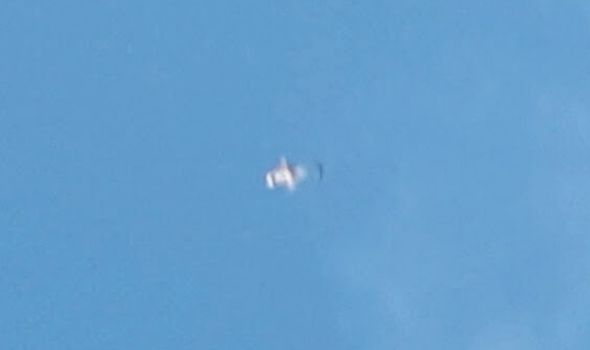 She said: “After a thorough review, the department has determined that the authorised release of these unclassified videos does not reveal any sensitive capabilities or systems and does not impinge on any subsequent investigations of military air space incursions by unidentified aerial phenomena.”

When the 2017 footage emerged, a former Pentagon employee Luis Elizondo, who headed up a secret official UFO program, said it was “compelling evidence” we might not be alone in the universe.

Mr Elizondo said: “These aircraft – we’ll call them aircraft – are displaying characteristics that are not currently within the US inventory nor in any foreign inventory that we are aware of.

“Things that don’t have any obvious flight services, any obvious forms of propulsion, and manoeuvring in ways that include extreme manoeuvrability beyond, I would submit, the healthy G-forces of a human or anything biological.”