Uber is providing a fleet of small vehicles to help the UN deliver emergency food and water supplies to war-torn areas of Ukraine.

As part of a collaboration with the UN’s World Food Programme (WFP), Uber is using a custom-built version of its platform for relief efforts.

So the initiative is using a fleet of smaller vehicles such as vans to send relief items from warehouses to people in need in densely populated parts of the country.

Just like any ride on the Uber app, the progress of deliveries can be tracked in real-time through a special ‘private-label’ version of its app platform. 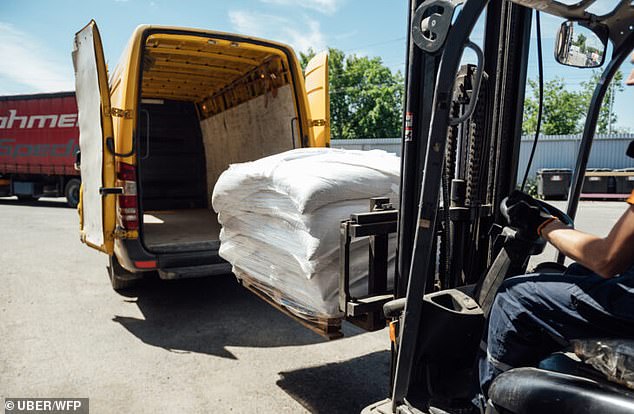 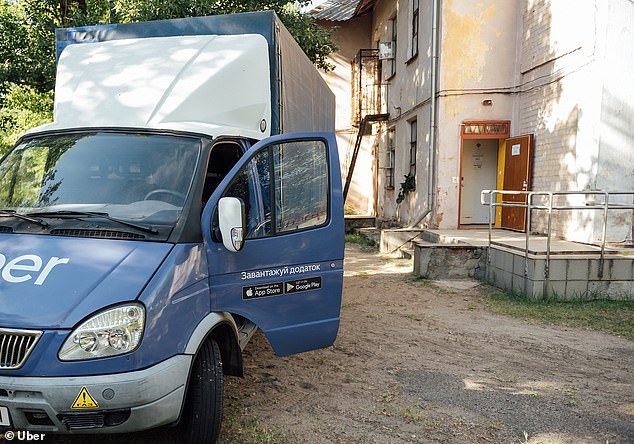 Pictured, one of the delivery vans. Larger vehicles such as trucks face issues reaching in-need Ukrainians in built-up areas, such as structural damage and high threat of Russian bombardment

‘With larger vehicles facing issues reaching those in need in built-up areas, collaboration with Uber allows WFP to better coordinate, dispatch and track a fleet of smaller vehicles delivering relief items from warehouses to people in need in densely populated areas of Ukraine.

Through this platform, WFP can get its food closer to those people needing its support, dispatching deliveries in various sizes of vehicle, tracking each trip to its destination, and confirming deliveries have been made safely.

Collaboration with Uber allows WFP to better coordinate, dispatch and track a fleet of smaller vehicles delivering relief items from warehouses to people in need in densely populated areas of Ukraine.’

‘Uber is thrilled to be working with WFP to help them more efficiently distribute emergency food relief across Ukraine, by providing free access to a customised version of the Uber platform,’ said Uber CEO Dara Khosrowshahi.

‘Using our technology, WFP can now schedule, dispatch, track, and manage deliveries by a network of cars and small vans to final distribution points within a 100km [62 mile] radius of WFP warehouses across the country.’

Thanks to the collaboration, WFP has already delivered food from its warehouse in Dnipro to other parts of the city, ready for distribution.

Further deliveries are also ongoing in other parts of the country, including Lviv, Vinnytsia, Chernivtsi and capital city Kyiv.

Some of the delivery drivers worked in Ukraine as Uber drivers before the Russian invasion, the BBC reports.

The initiative uses a specially-adapted version of Uber Direct, an Uber platform already used by businesses such as Apple and Tesco.

With Uber Direct, companies can use Uber’s network of drivers and partners to move goods within their supply chain, between locations, and to customers.

Usually, these businesses pay Uber a commission per delivery for the service, but the WFP is not being charged.

The technology has been custom-built for free by Uber engineers to meet the needs of WFP operations on the ground.

It means that WFP are able to build a network of drivers using small cars or vans who are contracted directly with WFP.

Using Uber Direct they can schedule, dispatch, track and manage deliveries using this private network to distribution points within a 62 mile radius of WFP warehouses.

Uber said functionality has been built for WFP so they can avoid any blackout any area or route they believe is no longer safe, and can be recalibrated as the conflict moves.

By the end of June, WFP will be providing food and cash to more than 3 million people per month in the country. 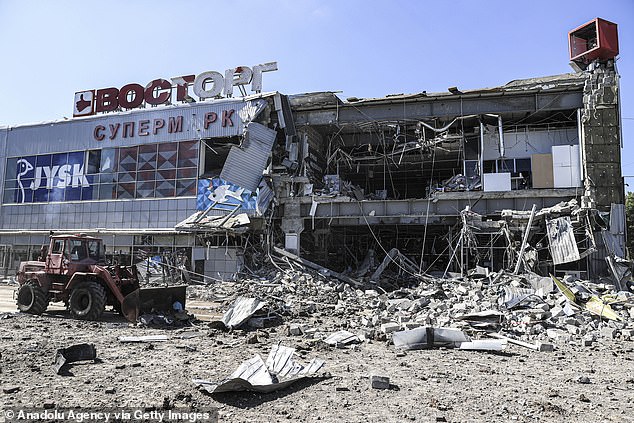 Larger vehicles are facing issues reaching Ukrainians in need in built-up areas, such as structural damage and high threat of Russian bombardment. Pictured is a view of a destroyed shopping mall due to shelling in Kharkiv, Ukraine on June 08, 2022 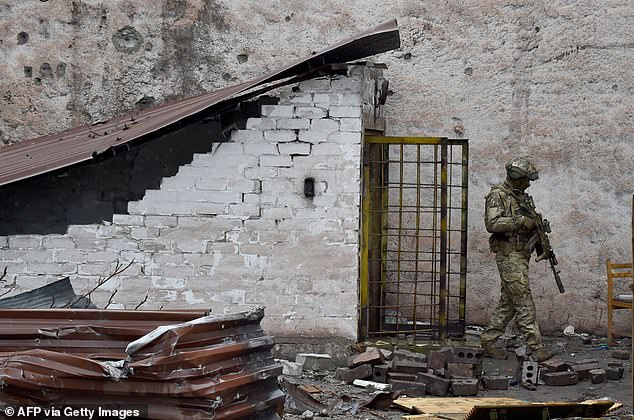 ‘WFP is playing a critical role in providing food and cash assistance to those most affected by the war in Ukraine,’ said Matthew Hollingworth, WFP’s emergency coordinator in Ukraine.

‘This technology helps WFP facilitate its response and improves how we serve communities in Ukraine that rely on us.

‘It enhances our access to Ukrainian businesses within Uber’s network, making our operations more efficient while also harnessing local capacities.’

The ridesharing giant says it is also working to provide additional support to help refugees who have arrived in the UK.

It’s supporting the British Red Cross to provide an initial 8,000 free meals and rides to refugees in several UK locations. 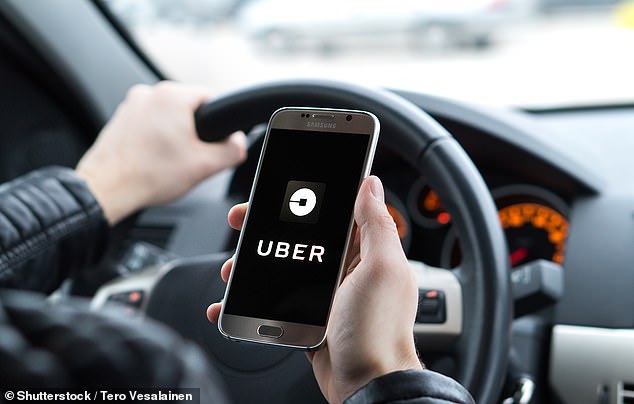 Uber has had a tough few years; in May 2020, during the Covid pandemic, it announced plans to lay off 3,700 employees, around 14 per cent of its workforce.

Last December, the UK High Court declared Uber’s business model ‘unlawful’, as it does not comply with the Private Hire Vehicles (London) Act 1998.

A Supreme Court ruling in February had declared Uber drivers workers of Uber and therefore entitled to benefits such as sick pay and minimum wage.

Uber argued that it acted as an agent’ between passengers and drivers, but the High Court has ruled this to be unlawful.

Uber, which is headquartered in San Francisco, is currently operating in the UK thanks to an 30-month licence extension granted by Transport for London (TfL) in March this year.

The ridesharing firm has had a torrid time getting approval from Transport for London (TfL) to operate on a long-term basis. TfL has previously cited passenger safety among the issues with the platform.

UBER AND WAYMO TEAM UP TO GET DRIVERLESS TRUCKS ROLLING

Uber and Google’s autonomous vehicle unit Waymo said this week that they are joining forces to get driverless trucks hauling cargo on roads across the US.

Due to the vast distances between American cities and with truck transport key to the economy, companies see self-driving as a way to cut costs and reduce risk.

Waymo will allow its technology to mesh with an Uber Freight platform that connects truckers with loads, much like how Uber lets people summon rides using smartphone apps. 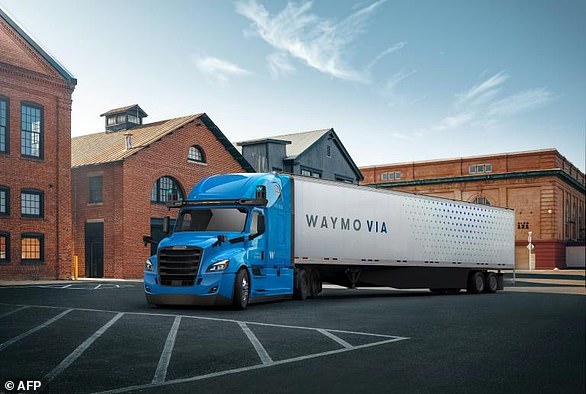 ‘Uber Freight’s network of shippers, carriers, and marketplace technology is a great match for the Waymo Driver,’ Waymo head of commercialization for trucking Charlie Jatt said in a statement dated June 7.

Carriers that buy trucks equipped with Waymo systems will be able to opt in to having the vehicles deployed as ‘autonomous assets’ on the Uber Freight network, the companies said.

The firms will also explore together the potential for creating hubs where cargo is easily handed off from self-driving trucks to human truckers.

‘Both companies envision a future where autonomous trucks tackle the long-haul portion of driving, easing some of the burden of the increasing demand for freight while also enabling drivers to shift into short-haul jobs,’ they said.

Before driverless trucks are allowed onto roads and highways, however, multiple tests must still be conducted to ensure they are safe.

Waymo has been testing self-driving trucks in a handful of US states.

The Freight unit has been steadily growing, according to quarterly earnings releases.