Twitter is testing out a feature that will allow users to change the playback speeds of videos – making them one and a half, and twice as fast as normal.

Select Android and web users will have a new option when they open up a video or any other form of media from the timeline.

It will be shown as a small cog, and clicking it presents them with the choice to go from a quarter speed, and up to twice the normal speed.

The speed changes are similar to those seen on YouTube and podcasting services like Spotify, going up in quarter increments to 2x.

TwitterSupport wrote: ‘In 2x, 1x, 0.5x…now testing more options in playback speed for videos. Some of you on Android and web will have different sets of playback speeds to choose from so you can slow down or speed up videos and voice Tweets.’ 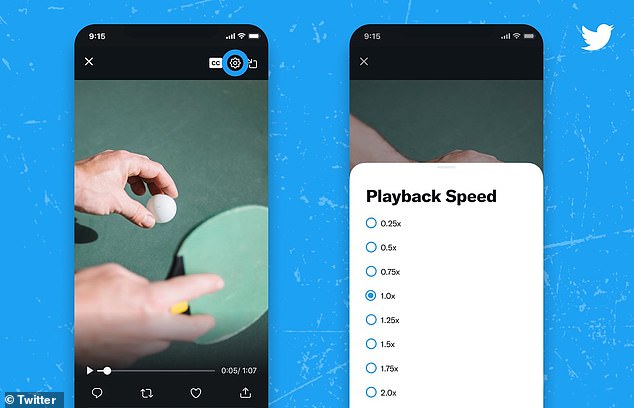 Twitter is testing out a feature that will allow users to change the playback speeds of videos – making them one and a half, and twice as fast as normal

This is the latest in a line of new tweaks and features being developed by the social media giant, including long-form posts and downvotes on replies.

The video and media push comes as firms try to compete with the increasing dominance of the Chinese-owned video platform TikTok.

According to Twitter, users with access to the new feature will be able to select their desired playback speed after clicking on a video.

TwitterSupport wrote: ‘In 2x, 1x, 0.5x…now testing more options in playback speed for videos. Some of you on Android and web will have different sets of playback speeds to choose from so you can slow down or speed up videos and voice Tweets’ 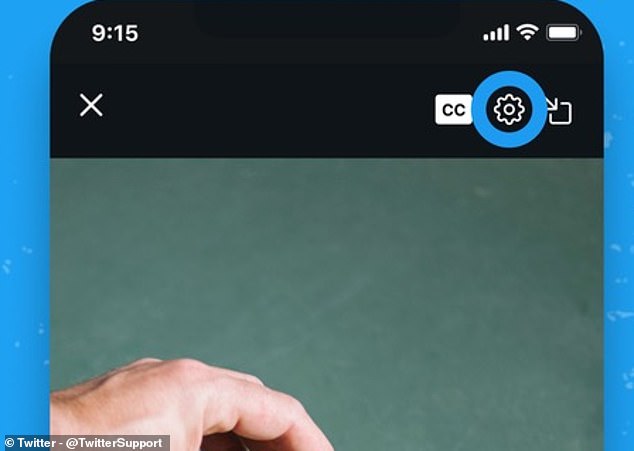 The speed changes are similar to those seen on YouTube and podcasting services like Spotify, going up from 0.25x in quarter increments to 2x

ARTICLES: Rumours suggest Twitter is working on a new articles feature that would have no word limits.

This could allow for exclusive articles, newsletters, extra information and even syndicated articles.

Votes aren’t visible, but instead used to customise what content a user can see within any given thread.

EASY DM: Twitter is also testing a feature that gives users a quick method for sending a direct message.

This variable playback would be available in increments of 0.25x, from a quarter speed, to twice original.

Twitter said it does plan to expand the test to iOS in the future, but is currently only available for the Android app, and web browsers.

The idea behind the playback speed change is to either give users a change to view a fast moving clip more carefully, or speed up a video if you just want the overview of what is happening.

Variable playback speed is a commonly requested feature among users of any platform that includes audio and video content.

Rumours suggest Twitter is working to improve its video playback quality, after reports it was testing full-image display in timelines, and 4K resolution photos.

These are among a spate of new features, the most recent was the ability to more easily direct message another user from within the body of a tweet thread.

This would appear as a direct message icon on on a Tweet within the timeline, where that user allows unsolicited DMs.

The feature has proved controversial, with some users saying it opens them up to abuse, but Twitter says safeguards are in place, and it makes it easier for people to engage with a discussion that may not be comfortable posting publicly.

Twitter responded: ‘We got your feedback about our test that makes it simpler to reply directly to a Tweet author via DM. As we test this with a small group, safety is always a priority. You can limit who can DM you. That setting, plus quality filters, applies to all DMs.’

Another recent feature, designed to improve the quality of replies shown to users, was a downvote button.

The negative reactions, captured by clicking a downward pointing arrow, won’t be available to the public, or to the person who posted the original tweet.

‘We learned a lot about the types of replies you don’t find relevant and we’re expanding this test,’ the firm wrote in a tweet from its TwitterSafety account.

The social media giant says it plans to use the feedback behind the scenes, to tweak what replies it shows the user who voted – rather than act as a rating system. 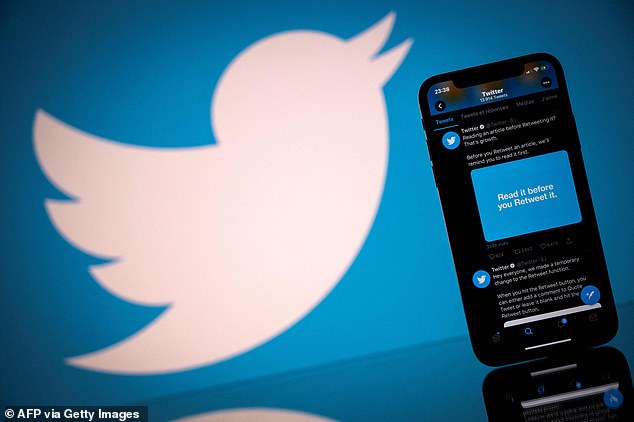 This is the latest in a line of new tweaks and features being developed by the social media giant, including long-form posts and downvotes on replies

Twitter is working on a new ‘Articles’ feature that would let you post much longer tweets, leak claims

From quick snap reactions to hilarious memes, Twitter is best known for its short and sweet content.

Users are currently restricted to tweets of 280 characters, and while this is usually enough for most people, a new report suggests that those hoping to post longer tweets could soon be in luck.

While the screenshot doesn’t give away many details, it indicates that Twitter Articles could have their own dedicated section within the Twitter app.