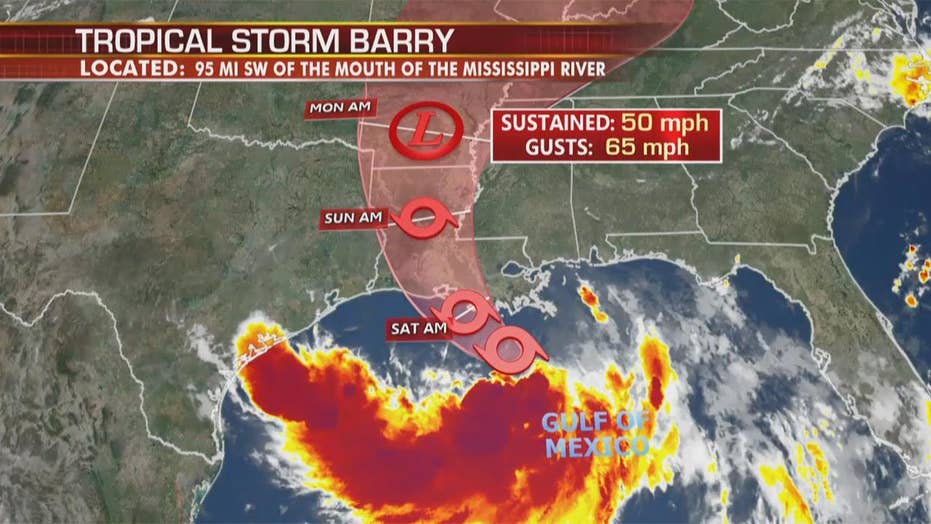 As Tropical Storm Barry continues to barrel toward the Louisiana coast, flooding and rainfall are increasingly becoming a concern — especially for the city of New Orleans, which is more vulnerable during severe weather events.

Barry is forecast to dump 10 to 20 inches of rain on New Orleans through Sunday. Some isolated areas could see as much as 25 inches.

TROPICAL STORM BARRY'S PATH: WHAT YOU NEED TO KNOW

But why is this historic city more prone to flooding than other areas of the state? Read on for a look at a few of the factors that have put the so-called “Big Easy” at an increased risk.

New Orleans is particularly vulnerable to flooding because of its low elevation, according to the University of Wisconsin-Eau Claire. Only about half of the city is above sea level — a drop from what once was 100 percent, per The Atlantic, which cited human interference as a primary reason for why the city has sunk. A 2016 NASA study also said “natural geologic” factors played a part.

“When New Orleans was being constructed they ran out of good land. To make more room, engineers drained swamplands around the area so they could continue expansion. This drainage led to subsidence,” stated Wisconsin-Eau Claire, noting subsidence is “sinking or settling to a lower level, in this case, it was the earth’s surface sinking lower in relation to sea level.”

Even some of the city’s first settlers — primarily in New Orleans’ French Quarter, the original part of the city — knew to build their homes on elevated land. Those with the “means and resources” built homes on “prime real estate” — or on lots roughly 10 feet about sea level, the U.S. Federal Emergency Management Agency (FEMA) writes in its “History of Building Elevation in New Orleans.”

“Even during its very beginnings, New Orleans’ residents understood the value of land elevated above the flood-prone land they had chosen to call home,” the agency adds.

In 1719, the first levee was built in New Orleans. The first of many along the Mississippi, those who constructed it were aware of the “supreme importance of elevated or at least protected ground in the city,” per the FEMA report.

But the construction of levees would later contribute to subsidence.

HURRICANE HEALTH RISKS: 3 THINGS TO WATCH OUT FOR

The city is situated between the levees along the Mississippi River and those around Lake Pontchartrain. This, according to the University of Wisconsin-Eau Claire, creates a “bowl” effect in the city. Essentially, once water gets in, it’s hard to remove.

New Orleans is also prone to flooding because the city is susceptible to storm surges, or “the abnormal rise in seawater level during a storm,” according to the National Ocean Service. It’s measured by how high the water reaches from the normal astronomical tide.

Wetlands and barrier islands serve as natural defenses against storm surges. In fact, “for every mile of continuous wetlands, a storm surge can be reduced by three to eight inches,” per the university.

“Wetlands are naturally replenished every year by sediment from a flooding river” if these areas are undisturbed, the university added. But Wetlands and barrier islands near New Orleans have disappeared at “an incredible rate” due to human interference.

WHAT ARE STORM SURGES?

“Dams upriver from the city have caused the amount of sediment in the river to be reduced by up to 67 [percent],” the university claims.

“Along with that, the levees built around New Orleans to protect it now divert the river’s flow much further out into the Gulf of Mexico, meaning that much of the remaining sediment is washed out to sea, and not deposited in either the wetlands or the barrier islands. These factors are denying nature’s best defenses their replenishment, and causing them to disappear.”

In fact, every hour and a half, Louisiana loses about a football field’s worth of land, The New Yorker claimed in a March report.