The toxin produced by a dangerous ‘stinging tree’ is comparable to a scorpion or spider’s bite, according to a new study.

Found all over eastern Australia, the dendrocnide plant is among the most toxic flora on Earth and stings can kill dogs or horses and cause excruciating pain in humans that last weeks, even months.

But until now researchers haven’t been able to identify the neurotoxin the plant, also known as the Gympie-Gympie tree, secretes – until now.

The team discovered the culprit is a new class of toxic miniproteins that has been named ‘gympietides,’ in honor of the Indigenous name for the stinging tree. 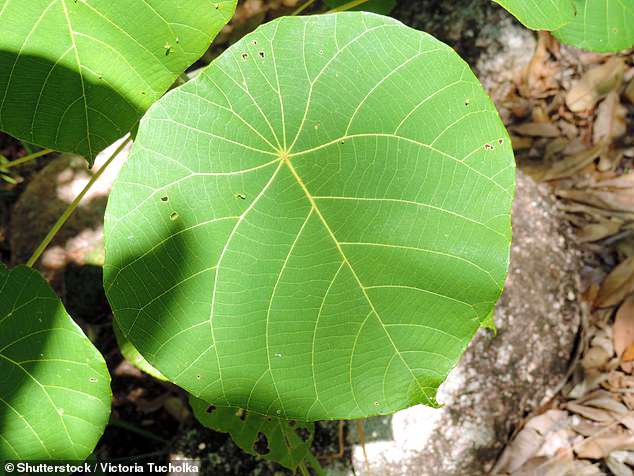 The Dendrocnide moroides plant, also known as the Gympie-Gympie stinging tree, is the world’s most painful stinging nettle. Until now, scientists haven’t been able to identify the neurotoxin the plant secretes

The Gympie-Gympie’s leaves, stems and raspberry-like fruit are densely covered in hair-like protuberances called trichomes, which are less than a fifth of an inch long.

But when they make contact with skin they’re more like tiny hypodermics, breaking off and injecting a painful toxin. 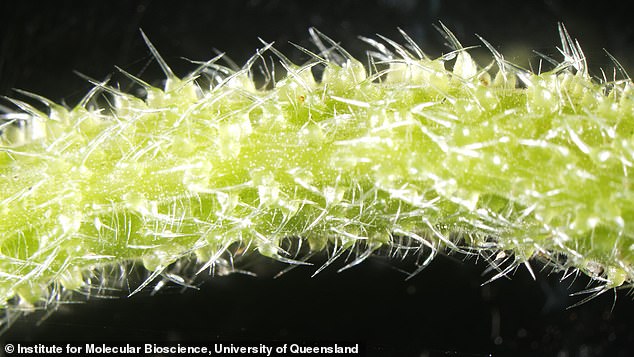 The Gympie-Gympie stinging tree is covered in tiny hairs that look inviting, but stick into the skin and inject a toxin that causes agonizing pain

A child stung by a giant Australian stinging tree. One researcher compared it to ‘being burnt with hot acid and electrocuted at the same time.’

As reported in the journal Science Advances, Kalani Gilding, Irina Vetter and a team of researchers at the University of Queensland’s Institute for Molecular Bioscience discovered the culprit was a completely new class of toxic miniproteins.

Dr. Marina Hurley, who did her PhD work in stinging trees, said a brush with the plant, nicknamed the ‘suicide tree,’ is ‘like being burnt with hot acid and electrocuted at the same time.’

‘Not only do you feel pain from where you are stung, if it is a really bad sting, within about 20 minutes your lymph nodes under your arms swell and throb painfully,’ Hurley wrote on The Conversation. ‘[They] feel like they are being slammed between two blocks of wood.’

In one historical account from the 1940s, a soldier said the pain was so bad he had to be tied to his hospital bed for three weeks.

The trichomes remain potent for decades, Hurley said, and dead, dried-up specimens from a century ago can still sting. 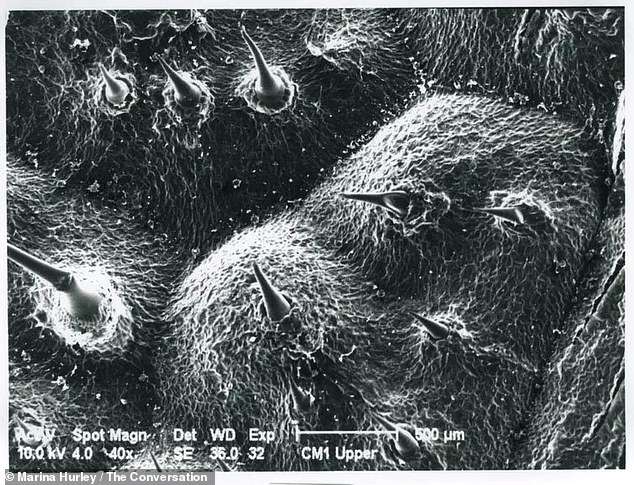 A magnified view of the tree’s trichomes. The fine hairs remain potent for decades – dried-up specimens from a century ago can still sting

There’s no real cure – the hairs are so fine that wax hair removal strips are sometimes used to yank them off.

The Gympie-Gympie, known scientifically as Dendrocnide moroides, can grow to 10 feet tall with leaves 20 inches long. 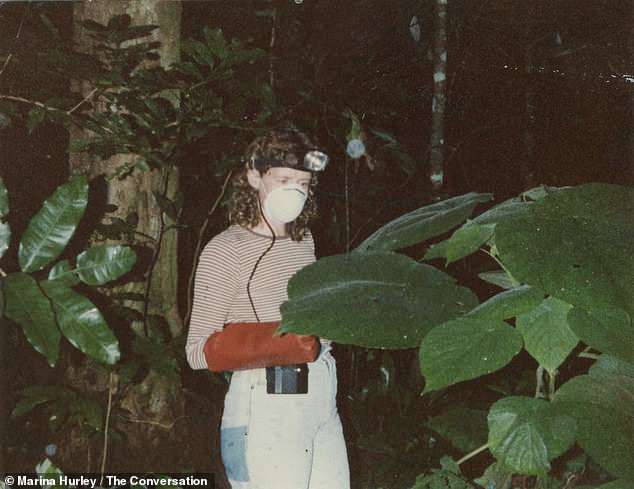 Dr. Marina Hurley studied the huge toxic plants for her PhD and had to wear a dust mask and cover her arms and legs when she was working. Standing near one unprotected for 20 minutes is enough to cause violent sneezing, nose bleeds and even breathing problems.

But you don’t even have to touch it to feel its wrath – standing near one unprotected for 20 minutes is enough to cause violent sneezing, nose bleeds and even breathing problems.

The hairs can remain in the skin for months, and with stings recurring if the skin is pressed hard or washed with hot or cold water.

Hurley said the only way she’d handle the free is wearing a dust mask and thick, padded welding gloves.

Although they come from a plant, the gympietides target the same pain receptors as the venom found in arachnids and cone snails, the researchers say, making the Gympie-Gympie a truly ‘venomous’ plant.

Vetter says the enduring pain may be caused by the gympietides permanently changing the sodium channels in a victim’s sensory neurons, not due to the fine hairs getting stuck in the skin.

‘By understanding how this toxin works, we hope to provide better treatment to those who have been stung by the plant, to ease or eliminate the pain,’ she said.

Because the trees’ toxins target a nerve-cell molecule that’s fundamental to our pain response, researching them may also help unlock how to block pain receptors.

It’s still not clear why the Gympie-Gympie evolved this off-putting defense.

While it’s toxic to humans and other animals, their leaves and fruit are a prized meal for beetles, birds and pademelons, an Australian marsupial related to the wallaby.

What is the Gympie-Gympie Stinging Tree?

The Dendrocnide moroides plant is thought to be the most potent and deadly stinging nettle in the world.

It can kill animals with severe allergic reactions and causing excruciating pain that last weeks in humans.

The Dendrocnide plant, also known as the Gympie-Gympie Stinging Tree

The D. moroides is nicknamed after the town Gympie in Queensland where it was discovered in 1860.

The pain is caused by tiny hairs which cover the leaves, stem and fruits of the plants, which can grow up to 10 feet tall with 20-inch-wide leaves.

When the hairs touch skin, the end breaks off and the shaft of the hair sticks into the skin, injecting a toxin in the same way as a hypodermic needle.