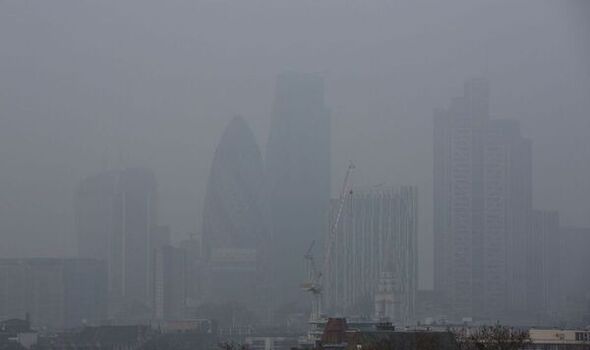 This month marks 70 years since the Great Smog covered London and killed up to 12,000 people.

Experts at Asthma and Lung UK warned this should not be dismissed as a “freak, one-off event”.

The charity’s Sarah Woolnough, said: “We need the Government to get a handle on this before another generation grow up breathing air so dirty and polluted it could leave them fighting for breath.”

Filthy air is responsible for up to 36,000 early deaths a year in Britain.

The charity said air pollution causes lung conditions including cancer, triggers life-threatening asthma attacks and stunts the growth of children’s lungs, potentially setting them up for a “lifetime of poor health”.

The Daily Express Green Britain Needs You crusade has backed calls for stricter laws after we found that nearly all children in Britain are exposed to dangerous levels of pollution outside school.

The Clean Air (Human Rights) Bill has passed the House of Lords and will be scrutinised by MPs. It is known as Ella’s Law, after Ella Adoo Kissi-Debrah, who died aged nine after an asthma attack in 2013. She lived near the South Circular in south-east London, and became the first person in the UK to have air pollution listed as a cause of death.

Defra minister Lord Benyon said: “Action on air pollution is an absolute necessity to ensure the health of our people and environment.”

The 82-year-old has had two lung conditions, bronchiectasis and chronic bronchitis, since she contracted whooping cough as a baby.

But during her 57 years in the Essex town, pollution has been her “major trigger”.

Elmi said: “On a bad day, toxic air can cause me to fight for breath and cough so intensely that I’m physically sick.” She avoids places with a lot of traffic and certain busy bus stops where fumes tend to circulate.

Elmi said doing so “has had a massive impact on my quality of life”.

The pensioner said the “only positive thing that came out of the pandemic” was a temporary improvement in air quality.

She added: “It made a notable difference to my condition. I was able to breathe more easily and comfortably walk for a longer time.”