How a tough day at work can change your VOICE: Stressful experiences throughout the day can cause you to speak faster and with more intensity by the evening, study finds

A tough day at the office changes our voices, a study suggests.

Researchers analysed recordings of people speaking every evening after work over the course of a week.

They also asked them to report on the stressors they had experienced that day and their perceived stress levels.

When they analysed the voice recordings using computer software they noticed some distinct changes on the days people reported more stressors.

They found that people talked more quickly and with more intensity when they’d had more strains that day, regardless of how stressed they actually felt. 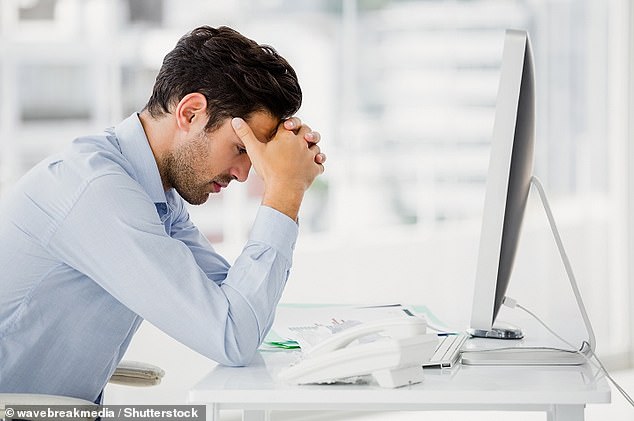 A tough day at the office changes our voices, a study suggests. Researchers found people talked more quickly and with more intensity when they’d had more daily strains

Work stress and money worries could increase your risk of having a stroke or heart attack by up to 30 per cent, a study found.

From an international sample of over 100,000 people, experts in Sweden linked the risk of cardiovascular disease with high stress levels.

The researchers are now hoping their findings could be used to help people keep track of their everyday stress levels so they can manage them better.

Voice recordings would be an objective measure that wouldn’t rely on a person noticing how much stress they might be under, they suggested.

Study author Dr Markus Langer, from Saarland University in Germany, said stress activates the sympathetic nervous system which leads to the production of hormones such as cortisol and adrenaline.

This can lead to bronchodilation – opening of the airways – and a higher breathing rate, which can increase the intensity, or volume, of the voice, and the rate of speech.

His team has now suggested that voice-recording technology could be used to help people monitor stress.

‘Given the ubiquity of wearable technologies and microphone sensors in smartphones and smart speakers, e.g. Amazon’s Echo, it could be possible to gather longitudinal [i.e. repeated over a period of time] voice data that provide insight on human stress levels,’ they wrote in their research paper.

‘Considering that stress is a universal cause of health problems, this could help to monitor the everyday impact of stressors and facilitate early stress detection, potentially contributing to better well-being.’

For the study, which is published in the journal Psychological Science, 111 people aged between 19 and 59 completed the voice diaries over a period of seven days, Sunday to Sunday.

The participants worked in a range of professions including medical and healthcare, consulting, engineering and administration.

They used their smartphones to send voice messages in which they responded to a set of four questions about their day, asked by a chatbot.

They also completed a set of daily self-report measures about their everyday work stressors and perceived stress level.

Because long-term stressors such as debt and health issues might also contribute to changes in voice features, the researchers also asked people to record these on the first Sunday of the task so that they could take them into account in their analysis.

Answering your emails outside work hours increases the risk of stress, emotional exhaustion, headaches and back pain, new research shows.

Researchers at the University of South Australia surveyed more than 2,200 academic and professional employees across 40 universities.

They also found that constantly waiting for work notifications at home can affect metabolism and immunity, making a person more vulnerable to serious health problems such as infection, high blood pressure and depression.

It also reduces the time for recovery activities like social interaction, exercise and spending time in natural settings, they said.