Tomb of midwife who delivered Jesus REVEALED: Ancient inscriptions and prayer lamps found inside a 2,000-year-old burial in Jerusalem ‘prove this is the cave of holy Salome’

A 2,000-year-old burial cave found in a forest in Jerusalem is believed to be the tomb of the midwife who helped with the birth of Jesus, following excavations that uncovered inscriptions citing ‘Salome, who was Mary’s midwife.’

The Israel Antiquities Authority (IAA) announced carvings in ancient Greek and Arabic that are enough to prove ‘this is the cave of holy Salome.’

Teams have also discovered ruins of shops, dating between the eighth and ninth centuries, that sold oil lamps used in prayer.

Hundreds of complete and broken lamps were found in the forecourt, ‘proving’ that the cave was a place of worship.

IAA archaeologist Zvi Firer said, ‘ We believe that pilgrims would come here, rent an oil lamp, perform their prayers inside, and go on their way.

‘It’s like today when you go to the grave of a revered rabbi and light a candle there.’ 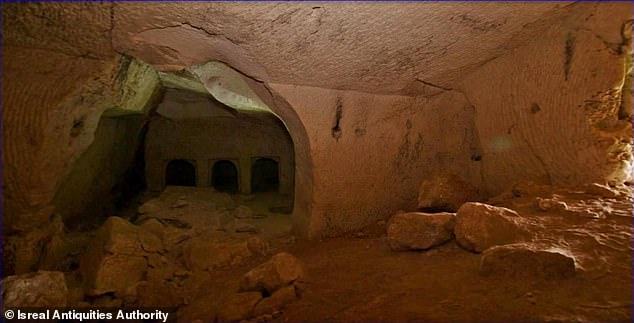 The burial cave is believed to be the tomb of Salome, who was the midwife to Jesus’ mother

Salome’s role as an assistant to the midwife at Christ’s birth is recounted in the Gospel of St James, a text dropped from the versions of the New Testament used by most Western churches.

‘The name Salome (or in Hebrew: Shalom or Shlomit) was a common Jewish name in the Second Temple-period and was also known in the Hasmonean and Herodian families,’ said Firer in a statement.

‘According to a Christian tradition, Salome was the midwife from Bethlehem who was called to participate in the birth of Jesus.

Is this the REAL face of Jesus? Forensic experts use ancient Semite skulls to reveal what Christ may have looked like 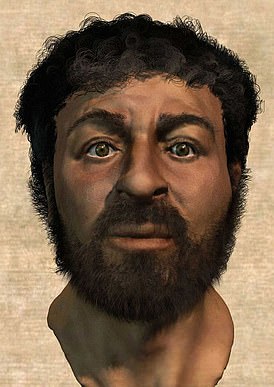 He may be shown as a Caucasian man with long, flowing light brown hair in many religious artworks, but Jesus would have likely had a darker complexion and short, dark, curly hair, a forensic expert claims.

‘She could not believe that she was asked to deliver a virgin’s baby, and her hand became dry and was healed only when she held the baby’s cradle.’

In the bible, Salome is revealed to be the second midwife to Mary.

‘And the midwife went forth of the cave and Salome met her. And she said to her: Salome, Salome, a new sight have I to tell thee,’ the scripture reads.

Her name is shown several times after, with Mary telling Salome not to tell anyone about Jesus until ‘he enters Jerusalem.’

‘According to a Christian tradition, Salome was the midwife from Bethlehem who was called to participate in the birth of Jesus,’ Firer said.

‘She could not believe that she was asked to deliver a virgin’s baby, and her hand became dry and was only healed when she held the baby’s cradle.’

Grave robbers discovered the tomb in 1982 and stole the sarcophagus, but formal excavations were conducted two years later.

The Jewish tradition of secondary burial in stone ossuaries is well-known in the archaeological record, but the surprise was the adaptation of the cave into a Christian chapel.

‘Judging by the crosses and the dozens of inscriptions engraved on the cave walls in the Byzantine and Early Islamic periods, the chapel was dedicated to the sacred Salome,’ IAA shared in a statement. 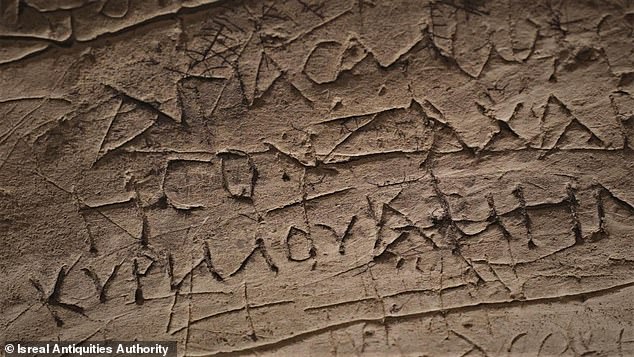 Inscriptions in the cave (pictured) read, ‘Salome, the midwife to Mary.’ The carvings are in both ancient Greek and Arabic 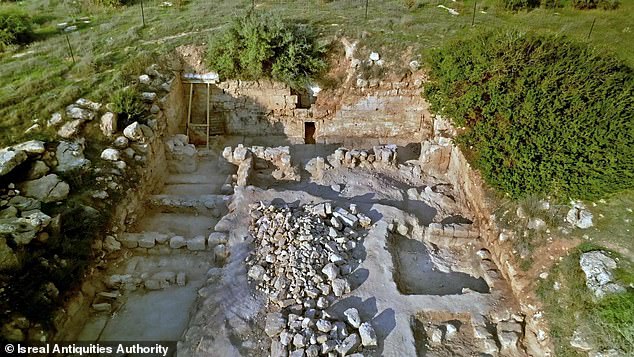 Archaeologists uncovered ancient ruins outside of the cave. The stones were once shops that sold oil lamps used as prayers 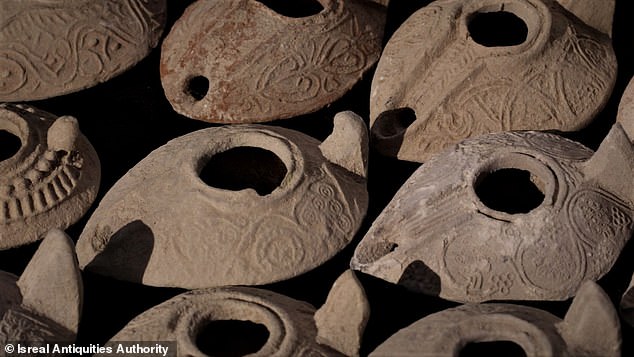 Hundreds of complete and broken lamps were found outside and inside the cave, which experts say proves the site was sought after destination of pilgrims

While the cave had been previously discovered, the elaborate cave forecourt has only been seen now since being constructed more than 2,000 years ago.

The court, extending more than 3,767 square feet, is surrounded by ashlar stone walls, which are individual stones fashioned into squares.

Archaeologists also uncovered mosaic flooring that once decorated the forecourt.

The entrances leading into the cave and the interior chapel were exposed, some of the stones carved with delicate decorative vegetal designs, including rosettes, pomegranates and acanthus vases, characteristic Jewish features. 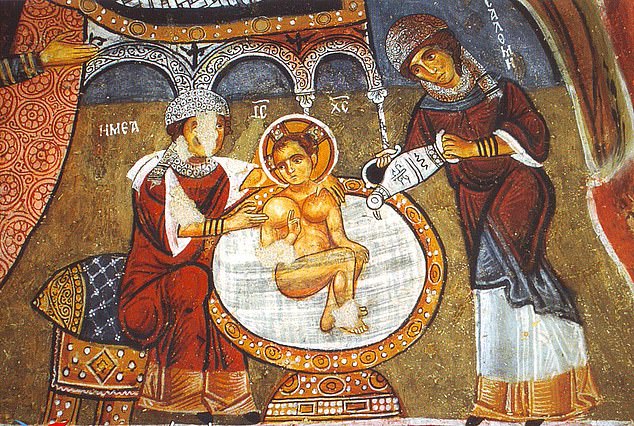 Salome’s (right) role as an assistant to the midwife at Christ’s birth is recounted in the Gospel of St James, a text dropped from the versions of the New Testament used by most Western churches 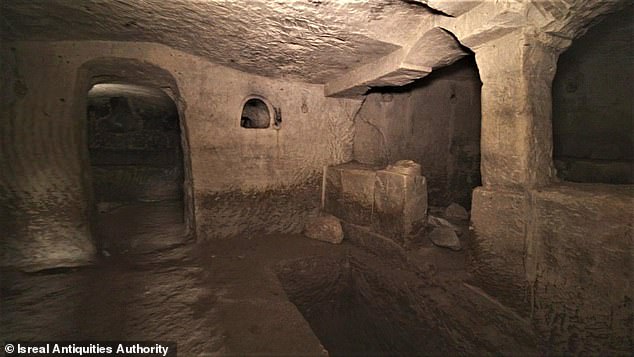 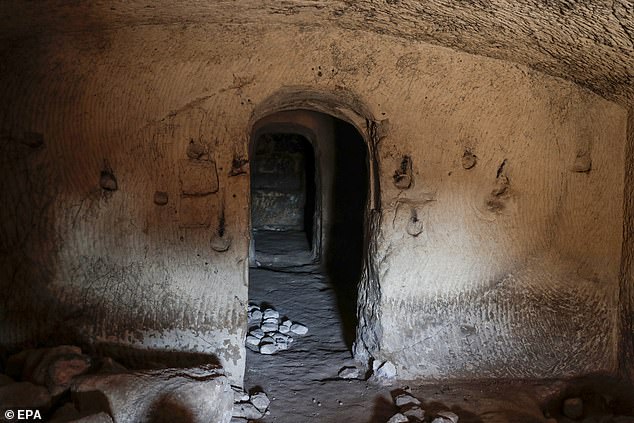 Formal excavations were conducted in 1984, which led experts to believe this was the tomb of the midwife. The newly found artifacts, according to experts, prove the cave is in fact, Salome’s tomb

‘The forecourt and the cave attest that the tomb belonged to a wealthy Jewish family who invested much effort into preparing the cave,’ IAA stated.

‘It is noteworthy that the court leading into burial caves was usually hewn out of the rock and not elaborately built of ashlar masonry as this forecourt.’

The announcement comes as the world is just days away from celebrating Christmas, which is the birth of Jesus in the Christian tradition.

The name ‘Christmas’ comes from the Mass of Christ, but the term does not appear in the Christian bible.

The celebration, however, was not celebrated by the early Church and did not take hold until the fourth century under the Roman Catholic Church, which then spread to the eastern 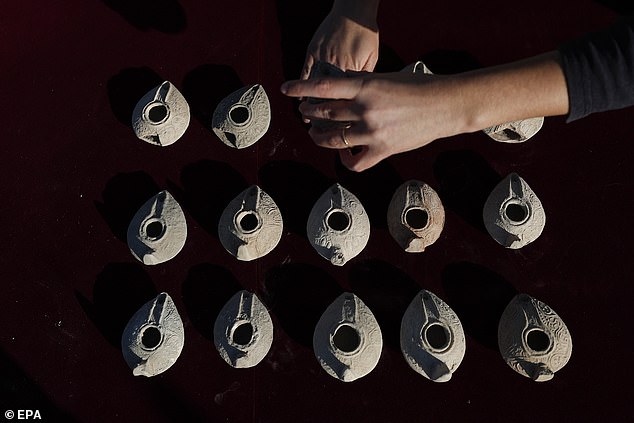 The lamps are clay and date between the eighth and ninth centuries. Pilgrims would use them as prayer candles and as a means to light the inside of the cave 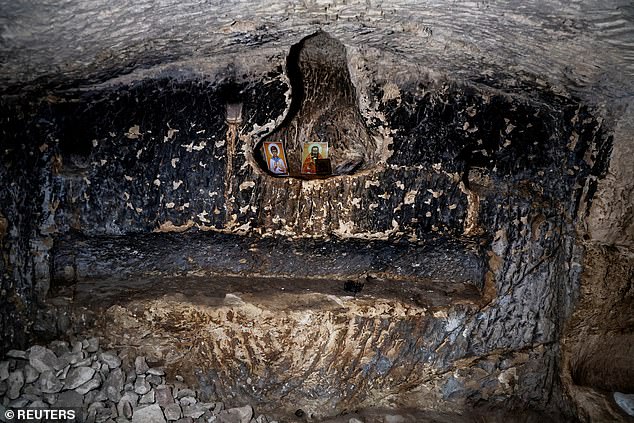 The cave is set to be open to the public soon, but archaeologists have already found religious imageries left by visitors

The celebration, however, was not celebrated by the early Church and did not take hold until the fourth century under the Roman Catholic Church, which then spread to the eastern Mediterranean.

The earliest known reference to it commemorating the birth of Christ on December 25th is in the Roman Philocalian calendar of 354 AD.

Pictured for the first time: The limestone piece of rock on which ‘Jesus was resurrected after crucifixion’

Also, ‘nail from Christ’s crucifixion’ is found inside box inscribed with ‘Jesus is King’ in a hidden chamber of Czech monastery