A tiny lemur weighing less than an apple has been born at a conservation park in England.

The baby Alaotran gentle lemur, whose sex is currently undetermined, was delivered at Wild Place Project in Bristol a few weeks ago.

Its birth will help safeguard the future of the species, conservationists say. The gentle lemur is classed as critically endangered by the International Union for Conservation of Nature (IUCN).

‘We are thrilled by all births here but this one is especially significant,’ said Joe Norman, animal team leader at Wild Place Project.

‘Because of the difficulties gentle lemurs are facing in the wild, the success of the captive breeding program is vitally important. 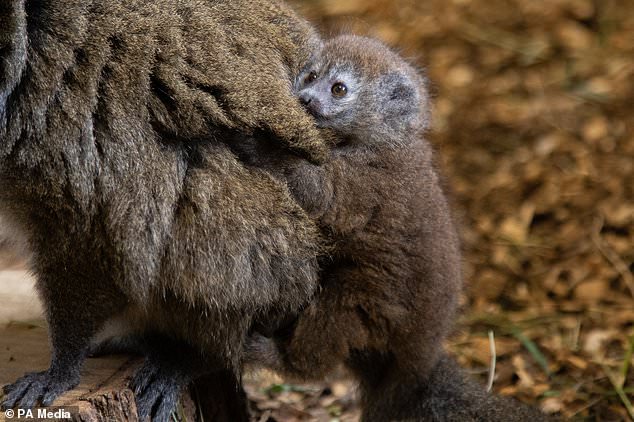 A baby Lake Aloatran gentle lemur (pictured) was born at Bristol’s Wild Place Project a few weeks ago, though it may be six months before its gender can be determined

There are currently just 71 gentle lemurs in zoos, 17 of which are in the UK.

The Bristol Zoo, which Wild Place Project is affiliated with, has 14 percent, more than any other institution.

The three-week-old is the third to be born to mother Tiana and father Roa in the past three years.

The International Union for Conservation of Nature (IUCN) has labeled the Lake Aloatran gentle lemur ‘critically endangered,’ with fewer than 1,000 individuals in the wild today.

It could be six months before keepers know whether the lemur, which will only reach between 11 and 16 inches when its fully grown, is male or female.

‘The infant is clinging onto its mum and will occasionally be passed on to its dad so visitors stand a very good chance of seeing it,’ Norman said.

‘But it will be a couple of months before it starts to move around on its own.’

Right now its less than 5 ounces, the weight of a typical red delicious apple, but it could reach two to three pounds by adulthood.

The lemurs, found around Madagascar’s Lake Alaotra, are the only primate to have adapted to living on the water’s reed and papyrus beds, using their hands, feet and tails for grasping and balancing.

The species is critically endangered due to their habitat being converted into rice paddy fields.

Marshlands around Lake Alaotra have also been burned so people can catch fish and create grazing areas for cattle.

Gentle lemurs are also targeted by hunters for food and to keep as pets.

Since 1990, the total population of Lake Aloatra gentle lemurs, also known as bamboo lemurs, fell from an estimated 11,000 to about 2,500, according to the New England Primate Conservancy.

The IUCN indicates there may be fewer than 1,000 individuals in the wild today.