It’s the go-to dating app for millions of singletons around the world, and now Tinder has revealed that its busiest day for swiping is coming up.

January 2nd is known as Dating Sunday, and is the day that sees the most singletons take to the app on the quest for love.

In particular, Tinder advises that singletons should sign on from 7pm-10pm.

In a blog, Tinder said: ‘Just as midnight on NYE is the time to be on the middle of the dancefloor, watching the fireworks, or snogging your crush, 7-10pm is the slot on Dating Sunday to find a new flame on the app.

‘So cancel all your other plans, as Tinder is the only place you should be at prime time.’ 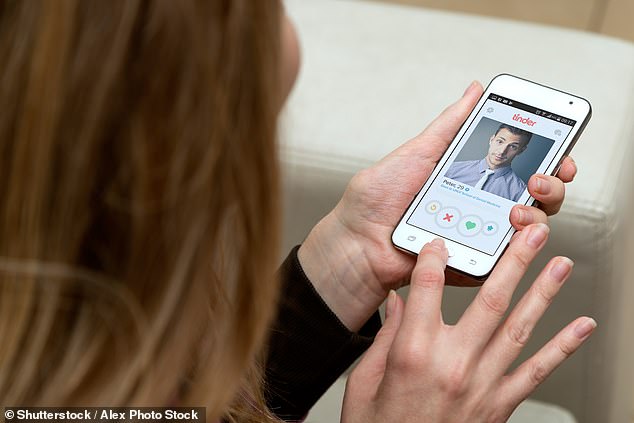 January 2nd is known as Dating Sunday, and is the day that sees the most singletons take the app on the quest for love

Tinder is the world’s most popular dating app, and has been downloaded more than 450 million times since launching back in 2012.

The app connects users with profiles using location-based technology, based on the gender, distance and orientation filters they’ve set.

Users simply swipe right on a profile if they’d like what they see, or left if it’s not for them.

If both users swipe right on each other, it’s a match, and they can then begin messaging one another within the Tinder app.

While users don’t have to be online at the same time to match, Tinder has revealed that its busiest day is January 2nd, with peak hours from 7pm to 10pm.

Laura Wilkinson-Rea, Director of Communications, UK and Director of Comms Nordics at Tinder says: ‘With over 430 million downloads and more than 60+ billion matches, we understand what singles want to achieve themselves and find in a match.

‘Forget resolutions that we won’t keep, 2022 is going to be The Year of Ambition, full of goals which we can put in motion.

‘As we know that a shared experience increases your matchability, singletons will seek out someone who shares their own ambitions this Dating Sunday.

‘Then the good goals can roll all year long.’

Following Dating Sunday, Tinder has revealed that members will soon be able to select from a series of ‘2022 Goals’ within the Explore page.

‘Launching in January, Tinder members will be able to select from a series of “2022 Goals” in Explore to find a new year “partner in crime” who shares their goals,’ Tinder explained.

‘Whether they are looking for a fellow foodie to “Taste together”, another sport enthusiast to “Sweat it together” or someone entrepreneurial to “Complete my power couple” in the new year.’

HOW CAN YOU CHECK IF YOU ARE BEING CATFISHED?

Dating apps and online websites are plagued with fraudulent profiles, known as ‘catfishes’.

‘Catfishing’ originated as a term for the process of luring people into false relationships, however, it has also come to encompass people giving out false information about themselves more generally.

These profiles often use images of another person to allow users to pretend to be someone else in order to get a date, or scam money from a lonelyheart.

Fortunately, there are certain ways to check if these profiles are real people or if they are bogus accounts —

This is probably the most valuable tool for catching out a catfish and can be done via Google.

To kickstart the process, people need only right-click the photos that are arousing their suspcions, copy the URL and paste it into images.google.com.

The search engine will search to see if the image has been used elsewhere.

If you find the picture associated with a different person to the one you’re speaking to on your dating app, it’s likely you’ve met a catfish!

2. Use an app called Veracity

It is useful for dating sites such as Tinder, Bumble and Grindr as it allows images from Dropbox or Camera roll (or similar) to be cross-referenced against any matching results.

Load the app, then select a screenshot of the suspicious dating app profile from your camera roll to launch the search.

The app will tell you if the picture belongs to somebody else.

Almost everyone who has a profile on a dating site will have a Facebook account (most dating apps require users to have one, after all!) so it is always advisable to track down your potential suitor on other forms of social media.

Google and other search engines have an extensive repertoire and most people will crop up in a search.

In this day and age, it’s unusual for someone to have nothing on Google.

Have a search through for them or their relatives, things they’ve said or posted in the past. If there’s nothing, that should raise alarm bells.

For prospective romantic engagements, seeing the face of someone you are virtually talking to is essential.

Anyone that asks for money online or via an app is likely to be a fraud.

This is probably a scam and should provide immediate red flags.