Tinder Swipeout: Popular dating app CRASHES for users around the world as desperate singletons seek answers for the mystery outage

Tinder has stopped working for hundreds of users around the world.

The app is the most popular dating platform in the world and user have taken to social media to seek an explanation for the mystery outage.

Singletons complained of being unable to log in and receive or send messages.

A peak of nearly 500 complaints has flooded social media as people scrabble for an explanation.

Users in the UK and Europe as well as parts of the US were having difficulty with the app and found they were able to swipe left or right.

Instead of profiles of a potential date appearing the Tinder users have been seeing a ‘Error 5000’ message.

According to outage detector site Down Detector, 41 per cent of reported issues with Tinder relate to sending and receiving messages.

Almost a third of users (32 per cent) are complaining of issues logging in and 26 per cent of problems are to do with server connection.

A peak of nearly 500 complaints has flooded social media as people scrabble for an explanation. According to outage detector site Down Detector, 41 per cent of reported issues with Tinder relate to sending and receiving messages

Social media was quick to pick on the outage, with Twitter users among those to vent their frustrations.

Dominic Bernaudo tweeted: ‘@Tinder I was having trouble sending and recieving messages. I restarted my phone, and now I can’t log in – getting error code 5000. Any ideas on what’s going on, or what I can do?’

Wrathie said: ‘Seriously!!! Can’t even bloody log in now to message Steve! Had to grow a pair and ask for his number via psn messenger.’

Many users choose to share memes to express themselves, among them Declan Doyle who posted a GIF of Sheldon from the Big Bang Theory hyperventilating into a brown paper bag. 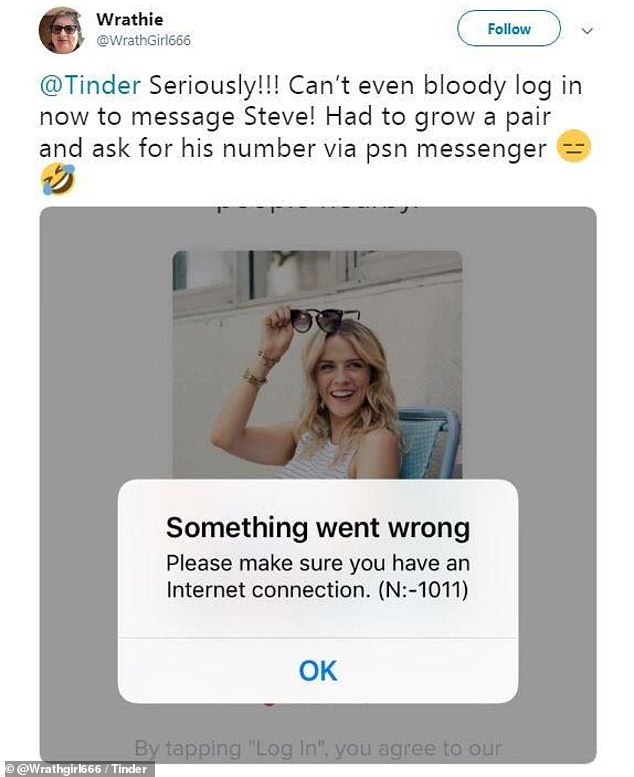 Wrathie said: ‘Seriously!!! Can’t even bloody log in now to message Steve! Had to grow a pair and ask for his number via psn messenger.’ 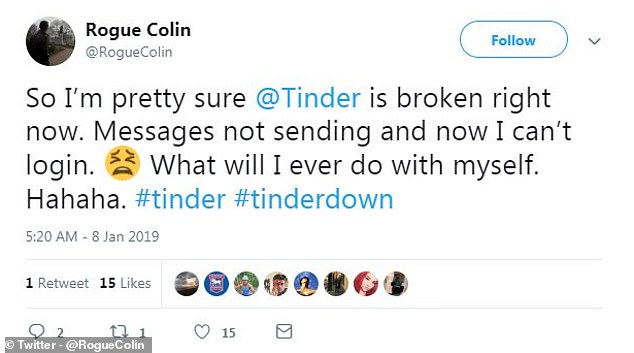 Rogue Colin wrote ‘So I’m pretty sure @Tinder is broken right now. Messages not sending and now I can’t login. What will I ever do with myself. Hahaha. #tinder #tinderdown’

Many users took to Twitter to complain. Hannam Conor wrote ‘tinder is down. God help us all’

Finch wrote: ‘ tinder is down how the hell am i supposed to get my daily validation now?’ 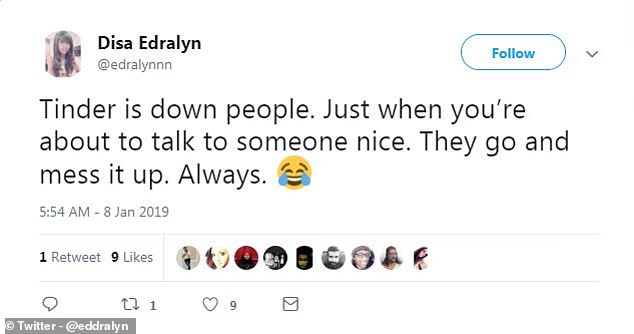 Disa Edralyn @eddralyn Tinder is down people. Just when you’re about to talk to someone nice. They go and mess it up. Always

Not everyone was as annoyed at being cut off from the app, with many choosing to see the funny side of the outage.

Finch added: ‘Tinder is down how the hell am i supposed to get my daily validation now.’

On a similar note, Calvaryn said: ‘Tinder is down… How am I meant to momentarily boost my ego with a false and shallow sense of self worth? Please fix.’

HOW DID ONLINE DATING BECOME SO POPULAR?

The first ever incarnation of a dating app can be traced back to 1995 when Match.com was first launched.

The website allowed single people to upload a profile, a picture and chat to people online.

The app was intended to allow people looking for long-term relationships to meet.

eHarmony was developed in 2000 and two years later Ashley Madison, a site dedicated to infidelity and cheating, was first launched.

In 2012, Tinder was launched and was the first ‘swipe’ based dating platform.

After its initial launch it’s usage snowballed and by March 2014 there were one billion matches a day, worldwide.

In 2014, co-founder of Tinder, Whitney Wolfe Herd launched Bumble, a dating app that empowered women by only allowing females to send the first message.

The popularity of mobile dating apps such as Tinder, Badoo and more recently Bumble is attributable to a growing amount of younger users with a busy schedule.

In the 1990s, there was a stigma attached to online dating as it was considered a last-ditch and desperate attempt to find love.

This belief has dissipated and now around one third of marriages are between couples who met online.

A survey from 2014 found that 84 per cent of dating app users were using online dating services to look for a romantic relationship.

Twenty-four per cent stated that that they used online dating apps explicitly for sexual encounters.