Today’s modern lifestyles mean we’re often burning the candle at both ends at the expense of a good night’s sleep.

But a new study shows this can be problematic during the week even if we manage to catch up on sleep at the weekend.

The study authors from Florida report a ‘great deterioration’ in physical and metal health that’s most pronounced after just three consecutive nights of sleep loss.

From a sample of nearly 2,000 US adults who completed sleep diaries, the experts found symptoms soar after just one night of bad sleep, but peak after three nights.

In terms of mental health, participants reported a pile-up of angry, nervous, lonely, irritable and frustrated feelings as a result of sleep loss.

Physical symptoms brought on by sleep loss, meanwhile, included aches and pains and even breathing problems. 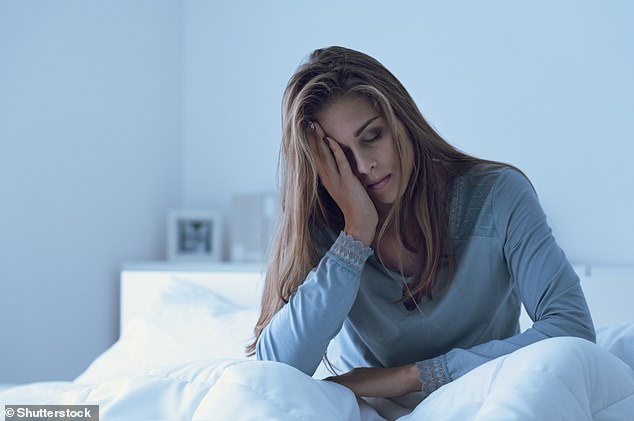 Sleep loss causes mental symptoms, like depression, and physical symptoms such as aches and breathing problems, according to the study authors from the University of South Florida

The study has been conducted by experts at the University of South Florida’s School of Aging Studies, which is based in the city of Tampa.

The team investigated the consequences of sleeping fewer than six hours for eight consecutive nights.

‘Many of us think that we can pay our sleep debt on weekends and be more productive on weekdays,’ said lead study author Soomi Lee.

‘However, results from this study show that having just one night of sleep loss can significantly impair your daily functioning.’

Researchers used data provided by the Midlife in the United States study, a national longitudinal study of health and well-being funded by the National Institute on Ageing.

The sample included 1,958 middle-aged adults, all of whom were relatively healthy and well-educated, who provided daily diary data for eight consecutive days.

Not sleeping enough can increase the risk of developing dementia later in life, according to a 2021 study.

People getting less than six hours were most at risk, according to the authors from the University of Paris.

The team analysed survey data on the health of 7,959 British individuals since 1985, including self-reported sleep durations.

They found those aged 50 to 70 who got fewer than six hours sleep a night in middle-age had a 30 per cent higher risk of late-onset dementia.

Among them, 42 per cent had at least one night of sleep loss, sleeping 1.5 fewer hours than their typical routines.

The biggest jump in mental and physical symptoms appeared after just one night of sleep loss, the researchers found.

But the number of mental and physical problems steadily got worse throughout the three-day period, peaking on day three.

At this point, the human body becomes relatively used to repeated sleep loss, according to the team.

However, participants reported that the severity of physical symptoms was at its worst after six days.

These negative feelings and symptoms were continuously elevated throughout consecutive sleep loss days and didn’t return to baseline levels unless they had a night’s sleep lasting more than six hours.

Once getting less than six hours per night becomes a habit, it’s increasingly difficult for your body to fully recover from lack of sleep, according to Lee.

It causes a vicious cycle of worsening daily well-being, which can impact us both personally and professionally – such as falling asleep at our desk at work.

Therefore, the best way to maintain a strong daily performance is to set aside more than six hours for sleep every night.

‘Consecutive sleep loss was associated with degraded trajectories of daily affective and physical well-being,’ the team report in their paper, published in the journal Annals of Behavioral Medicine.

‘Making efforts to break the vicious cycle of sleep loss may protect daily well-being in adults whose sleep time is often compromised.’

A previous study led by Lee and colleagues, published in 2019, found losing just 16 minutes of sleep could impact job performance.

Waking up just one HOUR earlier could reduce your risk of depression by 23%, study finds

Waking up just one hour earlier could reduce the risk of depression by 23 per cent, a genetic study shows.

Researchers at University of Colorado Boulder analysed the genetic data of nearly 840,000 adults of European ancestry.

They found a link between earlier sleep timing patterns – getting up and going to bed early – and lower risk of a ‘major depressive disorder’.

It’s possible that the greater exposure to light during the day results in ‘a cascade of hormonal impacts’ that can influence mood.

‘We have known for some time that there is a relationship between sleep timing and mood,’ said study author Celine Vetter, an assistant professor of integrative physiology at CU Boulder.

‘But a question we often hear from clinicians is, ‘how much earlier do we need to shift people to see a benefit?’

‘We found that even one-hour earlier sleep timing is associated with significantly lower risk of depression.’

For those wanting to shift themselves to an earlier sleep schedule, Vetter says: ‘Keep your days bright and your nights dark.

‘Have your morning coffee on the porch. Walk or ride your bike to work if you can, and dim those electronics in the evening.’

Read more: Waking up one hour earlier ‘could reduce risk of depression by 23%’